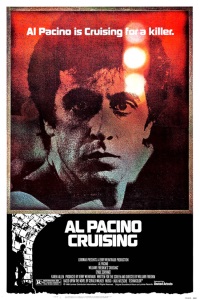 This is a film that I never heard of until I got into podcasts. It has popped up quite a few times throughout the years of listening and it intrigued me. What is shocking though is that my favorite actor of all time is Al Pacino so not sure how this one alluded me. It seems like a cult classic for sure. I knew a bit about the background, but not really sure fully what I was getting into. The synopsis here is a police detective goes undercover in the underground S&M gay subculture of New York City to catch a serial killer who is preying on gay men.

Where I think I should start this movie off is stating what the term ‘cruising’ means. Now as police officers, when they’re driving around looking for things, it is considering cruising. It is also a term for gay men when they’re looking for someone to hook up with. For the movie, we start on a barge where they notice something in the water. It turns out to be a severed arm. We then get a taste of how ineffective police work can be, especially here in NYC. They don’t want to file it as a homicide as it creates more paperwork and it creates a new case.

The movie then shifts our over to Patrolman DiSimone (Joe Spinell) and his partner Desher (Mike Starr). We see them hassle some transvestites and Desher forces one of them to perform oral sex on him.

We then shift over into a gay club. The person we’re following takes someone home who turns out to be an actor by the name of Loren Lukas (Arnaldo Santana). He is tied up and then stabbed to death. We don’t get a good look at the killer, but in a creepy voice we hear him state ‘You made me do that’.

The body is found and an autopsy is done. It turns out that the killer is impotent in a way. The ejaculate doesn’t have any sperm in it. This case is being helmed by Capt. Edelson (Paul Sorvino). There appears to be a serial killer as this victim looks similar to others and the MO might be slightly different, there does seem to be a pattern though.

To get to the bottom of this case, Steve Burns (Al Pacino) is called in. He’s a patrolman that looks similar to the victims. Capt. Edelson makes him a deal. Steve will go undercover in this gay scene as John Forbes and try to get to the bottom of who is doing these killings. Steve is uncomfortable at first and we see the toll it takes on him the deeper he goes into this case. We get see a couple of potential suspects like Skip Lee (Jay Acovone), Stuart Richards (Richard Cox) or could it even be one of the cops we saw earlier in this movie. Can the killer be discovered before this case breaks Steve?

Where I want to start for my analysis is that I was questioning if this movie was horror or not. The easy answer is no, but there are some dark elements. It is more of a police procedural or heck, I would even go as far to say that I could see this as an American take on the giallo film. Now I only really review horror, so what I really want to focus on are the darker elements and what I take from the movie.

The first thing would be the character of Steve. He takes on this task of going undercover. What I like is that we get to see a bit of his life before he does though. He is dating Nancy (Karen Allen) and they seem pretty normal. The deeper he goes into this lifestyle; we see that being with her makes him fall apart. Steve isn’t gay, but I do think that there is a part of him that is curious. He befriends his neighbor of Ted Bailey (Don Scardino). What is interesting there is that they get along well, they can talk to each other and when things are falling apart with Nancy, he confides in Ted to feel better. Do I think that he wants to be intimate with him? No, but we do get an interesting thing that happens when Steve meets his roommate of Gregory (James Remar).

Next I want to delve into the killer. This is based on real murders and this is also loosely based on a book. What I want to combine here is that why I can see this as somewhat of a giallo. Steve is trying to find the killer. We are getting to see the killer as he claims a few victims. The face isn’t hidden, but we can’t get a good look. We get some red herrings in this movie as Steve is looking. This movie is also pretty sleazy seeing some of the things that are happening in the gay bars and heck, what the killer is doing has a bit of sleaze as well. The motives of the killer feel very giallo like as well. What else I want to bring up here is the fact that in real life, it is suspected that there was more than one killer. This movie is showing how dirty the police can be and pinning everything on to one person to wrap it up, when there potentially could be more than one.

One last thing here about the story is I want to give credit to William Friedkin who wrote and directed this film. He does an excellent job at capturing the dirty, older NYC in this movie. That is almost a character in itself. He also does great with the cinematography to capture it. Allowing us to see and feel what it would be like to go into these types of clubs. It really is a slice of what life was like for gay men during this era in the city.

Shifting now over to the acting, I’ve already said that I’m a big Pacino fan. This is actually an underrated performance for me having now seen this. I’m actually shocked more than it isn’t brought up. I love seeing him descend into madness the longer he is doing this undercover work and apparently, a lot of the fear we’re seeing on his face was real as well. I liked seeing such greats as Sorvino, Allen, Spinell along with cameos by Ed O’Neill, Remar and Starr. Another really solid performance is that of Cox. There’s such a tragic character there and I think he does a good job with it. The rest of the cast really did round this out for what was needed in my opinion.

The last things really go over here would be that the effects were good. They looked to be done practical and it is benefited that there really aren’t a lot of them as well. I also thought the soundtrack was really good in fitting for what was needed. I guess some of the songs that were being played really weren’t what you’d hear in a gay bar of the era, but I think what was selected really helps with that gritty feel that we get for sure.

In conclusion, I really liked what this movie is doing. There’s an interesting feel here that is almost like giallo film from America. It does really capture that gritty feel that of the era for NYC which almost is a character in itself. The acting was really good across the board for me and I think seeing Steve as he descends into madness over his assignment. What effects we got worked, the cinematography was on point and the soundtrack also fit for what was needed. Overall I’d say this is a good in my opinion. This is one I would be interested in checking out again and actually recommend to horror and non-horror fans alike.