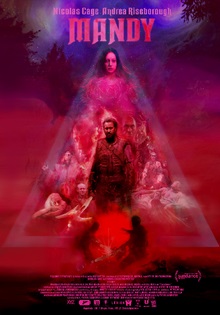 After seeing the first trailer for this film, it had interested. I had heard an interview of the writer/director Panos Cosmatos on a podcast and was quite intrigued to see this film even more. The first viewing was at the Gateway Film Center and now a second watch as part of the Summer Series for the Podcast Under the Stairs. The official synopsis for the film is set in the primal wilderness of 1983 where Red Miller (Nicolas Cage), a broken and haunted man hunts an unhinged religious sect who slaughtered the love of his life.

For this film, we start seeing that Red is a logger in remote wilderness. They have to helicopter him in and out. He lives with Mandy Bloom (Andrea Riseborough). Their house is in the middle of nowhere and they are perfect for each other. She wears rock band t-shirts and is into fantasy fiction. Their lives get turned upside down when Mandy passes a van. Inside of it is a religious cult led by Jeremiah Sand (Linus Roache). He decides that he needs Mandy. He also believes that she called out to him.

He tasks Brother Swan (Ned Dennehy) with getting her. They call upon these demon bikers, but they need a sacrifice. I want to say, I loved this image of these bikers. I had heard that they resemble cenobites from Hellraiser and that is a perfect way to describe them. The first image of them is silhouetted and we get small details. Regardless, they look great and are eerie. They knock out Red as well as take him hostage along with Mandy.

What I found interesting about this cult is that the words that Mandy reads matches to this group well. They have The Chemist (Richard Brake) who makes acid for them. What is intriguing about this is that everyone in cult takes it. They are seeing images as this drug is known for making people hallucinate. Mandy is given some and it makes for amazing visuals and slows down time. Jeremiah is a charismatic leader, but much like other cult leaders, he is taking advantage of those that are weak or those that have low self-esteem. The use of the acid also helps. When Mandy laughs at him, he decides that she must die.

Red is witness to it and he is left for dead. No longer caring about himself, he gets free and seeks out Caruthers (Bill Duke) to collect the reaper, which is a crossbow. Red also gets some information about those he is going against. He is out for revenge for those that wronged in him a visually stunning and violent rampage in what feels like a suicide mission.

That is where I’ll leave my recap for the movie and where I want to start is that this film runs about two hours long, but it didn’t feel that way. It is broken into two sections with cult attacking the two being the mid-way point of the film. Our first half does well in setting up our characters, which I tend to enjoy more. The second half is good and we get to see some crazy fight scenes. It is action packed for sure. Not to mention the axe like weapon that Red creates. I also liked how this ended. It was fitting for everything we got leading up to it.

Before I move away from the story, I want to delve a bit more into the characters. We have Red and we are given subtle things. I heard a podcaster bring up that they think he’s a recovering alcoholic. I agree with this after we see him turn down a drink and then when his world is shatter, he pulls out a secret bottle of booze in the bathroom. Red is broken by what happened to Mandy so he doesn’t care anymore. This gets explored as he goes further. Mandy and him are perfect together. They love each other completely. This is turned upside down, of course, when the cult arrives.

That cult will be the last bit I go into. They’re known as the Children of the New Dawn. Jeremiah is great as their leader. He is a zealot and it feels like they’re borrowing heavy here from Charles Manson. He cut a record, but no one liked it. He feels that people were too dumb to fully understand it. As I said earlier, he prays on the weak and those with low self-esteem. He is also a coward as well. What is great though, all of this is grounded. There are elements though of the fiction Mandy is reading though as Red goes deeper in getting his revenge.

The acting in this was one of the best parts for sure. Cage is mocked many times for his overacting. He gives his normal performance, but it fit this film perfectly. He has such creepy expressions on his face and his outbursts look like those of a madman really going through grief. There was only one time that it took me out of it. Riseborough was interesting to me for this movie. She really doesn’t have a big part, even though she is the catalyst for everything. Her subdued role I thought fit what was needed. Roache was great as the cult leader. He seems so strong and charismatic, but we see that it is a front even early on. I thought Dennehy, Brake and Duke were all good in support, even though none of them had big roles. They don’t necessarily need it though either. The rest of the cast just rounded out everything very well in my opinion.

From there I’ll go to the cinematography and the effects. I did hear that the grainy look we get at times was done with a filter and being that this film is set in 1983, I loved it. It took me back to films of the era. Other than that, this was shot beautifully and the use of color was amazing. It almost feels like Red is going to a whole new dimension to take care of all of this. Now the effects used were also great. They seemed to be done mostly practical and I liked that. It looks so real. The look of the demon bikers was great too. They are kept to the shadows where we want more, but it also gives our mind a chance to present something scarier. The look of the blood we get was also great. Seeing everything that happens to Red and where he ends up was solid. Overall, I don’t have anything negative to say about any of this.

Then the last thing I’ll go into would be the soundtrack. This was also something that was completely amazing. For a majority, it is heavy rock music. I did hear that the Cosmatos envisioned this as a rock opera, which fits. The music moves between rock and this eerie sounding songs that help to drive tension. The selections fit the scenes to ramp up the tension and the fear.

Now with that said, this film is great. My goal wasn’t to just completely praise this film, but there was so much good in it that I can’t help it. I thought the story isn’t the most complex, but we learn enough about our characters that the revenge aspect works. It is paced well and the two-hour run time doesn’t feel like it. We get a fitting end to everything that happens. The acting, visuals, effects and score are all great. I held off rating this film until I could get down on paper exactly how I felt and I’m glad I did. My first rating in my head was a little bit lower, but now that I have wrote this, I know this is a great film. I recommend giving this a viewing. Now after this second watch, I’ve cooled a bit, but I still dig what this movie is doing.