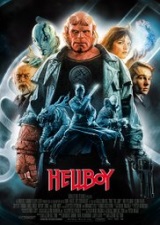 This film begins back during World War II. Hitler has turned toward the occult to try to win. This brings an agent, Kevin Trainor, to Scotland along with a unit of soldiers. The soldiers don’t believe there is anything there, but they come upon a set of ruins with a bunch of Nazi soldiers. They are setting up for a ritual. The man running it is Karel Roden, who is Rasputin. Along with him is a woman who loves him, Biddy Hodson and Hitler’s top assassin, Ladislav Beran. The experiment works, but it is interrupted. Roden is killed in the process. Trainor is worried about how long the portal had been opened and if something came from it. They end up finding a little demon that they name Hellboy. Trainor decides to be his father.

We then move into the present day. We see a bunch of videos and newspapers that there have been sightings of Hellboy. The head of the FBI is Jeffrey Tambor and he is on a talk show. He tells the audience that the Bureau of Paranormal Investigation doesn’t exist. We then see an agent coming to work his first day at this agency, he is Rupert Evans. It is disguised as a Waste Management Center. Inside we meet Trainor who has grown up to be John Hurt. He meets a fish man type creature who is Doug Jones. He then meets Hellboy, who is Ron Perlman. There is then an alert that they are called into.

A monster is running amuck inside of a museum. It is named Sammael and Perlman does battle with it. He thinks he killed it to be told by Jones that it is actually a monster that can revive itself. They do battle out into an alley and Evans comes to help him. There is a parasite from the monster on his arm and he rips it off. The monster flees and Perlman chases it into a subway tunnel. He thinks he kills it again. We see afterward that it multiples into two.

Perlman doesn’t return to the headquarters. He instead visits Selma Blair. It appears they grew up together, but she decided to try to learn how to control her power in a low security mental hospital. They talk and she tells him that she can’t come back. He is then retrieved by his team.

The film then cuts to a snowy place and we see a guide is murdered after bringing his two companions to the center of a maze. They turn out to be Beran and Hodson. They use his blood to bring back Roden.

Roden then puts a plan into motion by visiting Blair. He makes her dream of a traumatic event as a girl. She was attacked by children. Her power turns on, which engulfs her in flames and sets things on fire around her. She ends up blowing up the hospital, being unable to control it.

Roden’s plan involves Perlman and ending the world with the demons that they almost brought through the portal back in the day. Perlman and Jones go to kill the eggs that Sammael laid and it ends up as a blood bath.

Can this monster be stopped? Can Roden’s plan be stopped also before it results in the end of the world? Will Perlman get Blair back or will she end up with Evans?

Upon writing this, this is the second time viewing this film. The first time I viewed it, I wasn’t overly impressed. This time around I saw 35mm and I really got into it. The film is beautifully shot, which is something you come to expect from director and writer Guillermo del Toro. The story is also much darker than I realized which is amazing for a film that is based off of a comic book. I also really like taking history and adding fictional elements to it. Examples are that Hitler died much later than we realize and also that he had an artifact that made him invincible which is why the army conquered so much. Things like are a nice touch. I thought the monster that is similar to the Hydra in that every time that it dies, it brings two more back. That makes it interesting in how to handle it. I did find some things in the story are a little convenient. It is still interesting and dark, especially with having Rasputin being the main villain as well as the demons he summons looking similar to Cthulhu.

One thing I will give this film is the acting is good. Perlman is a very good Hellboy. He has the natural size and look that bring the character to life. He also has enough personality to make the role witty. Hurt was very solid as the old man who is the father of Hellboy. He is a good actor and comes off as the wise man. Blair looks good and I liked her complicated character. Jones is also very good. He is a solid character actor and does well in his role. Roden is solid as the villain and I liked the look of Beran. He is an interesting character that doesn’t talk at all. Tambor brings comedy and the rest of the cast round out the film well.

The next thing to talk about is the effects. There are almost exclusively done with CGI. I didn’t find any issue for the majority. I was pleasantly surprised by it and I liked this aspect of the film. I do feel that the editing of the film was pretty good. There were a couple of issues I had where some things that happened didn’t make sense, but I think that this more with the story. I did find the soundtrack to be pretty solid as well. I give the nod to del Toro as that is something else he is known for.

Now with that said, found this film to be an above average comic book horror film. The story did some great things incorporating history into the film and I liked that. It also has interesting villains and the overall demons. The acting is really good across the board. The effects are pretty much only CGI and I thought they were well done for the most part. The editing was good. The score was pretty solid as well. The film isn’t overly scary, but the film has great horror elements and was well done. I’d recommend giving this film a viewing.