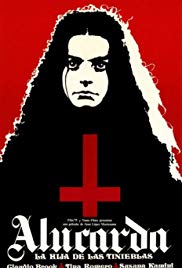 This was a film that I wasn’t entirely sure how I got turned on to. I heard of it, but didn’t know much about it and I think I saw the poster at some point. I ended up adding it to a horror movie challenge I was doing when I needed a film that was covering the corruption of religion and this appeared on a list. The synopsis is after the death of her parents, a young girl arrives at a convent and brings a sinister presence with her.

We start this with a woman who is giving birth. She is Tina Romero and she has the child taken away. She doesn’t want the father to know, focusing on a statue covered in moss. It then shifts to present. Justine (Susana Kamini) is moving into a convent after the death of her parents. As she enters, she sees a Dr. Oszek (Claudio Brook) along with his daughter Daniela (Lili Garza) who is blind. Justine rooms with Alucarda (Romero) and the two of them become fast friends.

While they’re outside with the other girls, they go off on their own. This takes them to meet a gypsy, also played by Brook, and he convinces them to come back to his group. It is there that Justine’s fortune is read and the gypsy man tries to give Alucarda a dagger. They leave and end up going into a crypt where they open up a casket. We then hear some weird voice that is similar to the wind. That night, they’re visited by the gypsy. The two of them make a blood pact with each other and we see a strange ritual.

At mass later, Justine passes out. She is taken by to her room where Dr. Oszek is called to see what is ailing her. Alucarda is tasked with watching over her. What is really going on here? Are they possessed by the devil or is this something in their mind?

Now I decided to go a little bit vague here with my recap of the film, because to be honest, it is really short. The movie itself runs 78 minutes. It definitely has a lot to say in that time. If you know my taste in films, I love the corruption of religion and of the innocence in those films. Alucarda is obviously the child that is whisked away in the beginning of the movie and it is seems to be hinting that the mother might have done something that has tainted the child from birth.

What is interesting though is that this takes place in a convent. We literally have two girls who are doing a ritual that could possible possess them while they are there. Going even farther though, I love that the film could be read in the beginning that it is just a mental illness. Dr. Oszek is really pushing this at the second act and it is interesting though because of Justine. Her parents have died so she is vulnerable. She meets an orphan like Alucarda who plays on that she needs love. I just found this to be interesting, because they are both ripe for what they get into.

This movie does get wild in the end as they try to stop what is going on. I don’t want to really delve into spoilers, but I thought it did go a bit over the top with the religious propaganda. I can’t really fault them, as it does come from Mexico where religion is quite important. I do have to give credit that there’s a bit of vampirism in this movie and having played Castlevania: Symphony of the Night, I caught on that Alcuarda spelled backwards is Adracula. I bring up that game, because the son of Dracula is Alucard there.

As for the pacing of the film, I do have to say that it is a bit disjointed at first. I really got confused to how long Justine was at the convent before the weird things happen as Alucarda and her seem to be really close. It does settle in and I really was sucked into what was happening. It also has that feel of Italian films as it gets a bit wild in the end as well. I did want a bit more from the ending, but I still thought it was good overall.

The acting was pretty solid too. Brook I thought was really good when he scolding Father Lázaro (David Silva), Mother Superior (Brigitta Segerskog) and the nuns. I love that he is trying to show them reason and it was very believable. The film does away with that though soon after. He doesn’t do much as the gypsy, but it is interesting for the dual role he portrays. Romero and Kamini are both quite attractive. Their performances are solid in the loss of innocence. The rest of the cast rounded out the film for what was needed as well.

To the effects of the movie, there actually isn’t a lot. The blood we get looks real. We see people getting cut with knives that looks like it could actually be happening. We get some supernatural stuff later in the movie that I thought was solid. There is also a cool looking devil that seems to be a mask. I liked the look there. The film is also shot very well in my opinion.

The last thing to cover would be the soundtrack. I noticed it pretty early on and it helped give an eerie feel to what is happening. There was only one time that it threw me off and that was late in the movie. Other than that one misstep, I think it was a solid soundtrack overall.

Now with that said, this is a movie that does some things I really like, in the corruption of religion and the taking of innocence. I also like that at first it seems like this could have a rational explanation or could be supernatural. It is definitely known though as things develop. It has a low running time and that actually makes it a disjointed at first, before settling in. I wanted a bit more from the ending, but it doesn’t ruin the film. The acting is solid for what was needed, as were the effects. It is shot well and the soundtrack really helps to make it feel quite eerie at times. I don’t think this is a great film, but it definitely does do some good things. This is definitely above average.