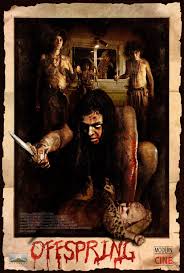 This is actually a film I watched because I saw there was a third film in the series coming to the theater, so I wanted to make sure if there was any continuity, I would know about it. I didn’t pay attention though and watched the sequel before checking this one out. The synopsis is a clan of cannibalistic inbred savages which plague the Northeast coastline is after an unsuspected family and their innocent baby girl.

During the opening credits, we are given newspapers of the headlines about the family in the synopsis. They’ve been doing this for over two hundred years. There’s a throw away line of dialogue later in the film that it is thought to be a lighthouse keeper on an island started this family and they’ve been eating as well as kidnapping people to continue the line on.

We then shift to man who’s up late working, David Halbard (Andrew Elvis Miller). He goes outside and sees a woman in the distance. She walks off into the woods. David then checks on his wife, Amy (Amy Hargreaves) and their daughter. It then shifts to a woman who is returning from a night out. She is mad to see the lights on in her house and is blaming the babysitter. She comes in to find a blood bath, before she is murdered herself. Her baby is also taken.

A couple of cops seek out George Chandler (Art Hindle). He’s a retired police officer who was investigating this roaming family. They were hiding out in a cave so that is where they’re going to check first. When they find that it is empty, he is under the belief that they disappeared because they crossed into Canada without knowing it and they’re now back again.

The tribe is led by Woman (Pollyanna McIntosh) as well as a male. There are a bunch of children that are with them and the teen girl that David saw. Woman is mad that the baby died as they needed it for a ritual. They’re then told to go out and get another baby, or they’re going to be cursed.

The Halbards are having over some friends for the weekend. Claire Carey (Ahna Tessler) is there with her son Luke (Tommy Nelson). She tells Amy about what is going on with her husband, Stephen (Erick Kastel), and not to spoil, but it isn’t good. He ends up calling and saying he’s on his way, which puts everyone into a panic. We actually get a taste of him with a hitchhiker named Susan (Jana Veldheer).

This cannibal tribe uses a ploy with the teen girl they have covered in blood to gain entry and go for the baby. Luke and Claire help to get the child out of the house before they do, while David is murdered and Amy is taken hostage. With the cops nearby and Steven on his way, this will all come to a head in an interesting showdown.

Now I do have to admit, there are some aspects to the film that I really liked. When I saw that Jack Ketchum wrote the novel as well as the screenplay, I was intrigued. I saw the film The Girl Next Door that was based on one of his stories while in college and it really messed with me, so I was intrigued to see what this was about. I do have to say, this isn’t as hardcore, but we do get some good elements here.

One of which is the tribe of cannibals. I could actually see something like this happening, especially if you have as thick of wilderness like you do in Maine. I also like the idea that they could be hidden by going up to Canada, being that another country. It can be an issue with sharing information across state lines, not to mention this is a whole different country so I can see it. I have a feeling he borrowed this idea from a story in Scotland which was also a loose basis for The Hills Have Eyes about a man who was kidnapping people and created a ‘family’ that would do similar things we see in both iterations.

Of course, Ketchum likes to explore the darkness of humanity. Here we have Steve who is a scumbag. They have him go a bit over the top in that, but it doesn’t hurt the film. There’s an interesting scene with him in a cave with the cannibals, where he actually offers his wife to them. It is a bit too on the nose of comparing who is the real savage here, Steven or them. He does seem to be getting off on watching what they do his wife as well.

To move next to the pacing of the film, I would say that it does well at just getting into it. We are given the background information to the events during the credits, which I really like, and then we get introductions to both sides. It doesn’t really waste any time from there and it really moves at a good pace. I would say that it builds tension, a lot of which is through trying to keep the baby from them. I do have a slight issue, thinking that the baby would probably cry more in some of the scenes. I do like how it ends as well.

The acting I thought was fine. It was interesting to see Hargreaves in this as she also in a television show I watch, Homeland. She has a much different role in this film and I thought she did well. Hindle I thought was fine as the retired cop who wants to solve what is going on here. Not sure I would totally buy everything he did, but it is a film so I can suspend some disbelief. Kastel was a bit over the top. He does establish himself as a villain which is what they needed. Miller was also fine, Nelson was pretty solid as the son and Tessler as his mother. McIntosh probably has the best performance I would say and the rest of her cannibal tribe was good. There are cameos by director Andrew van den Houten and Ketchum as well.

As for the effects of the film, I was actually expecting a bit more. This film was much more subdued in that aspect which was surprising. What we do get were practical, which did look good and I had no issues there. The effects in both of the houses after the attacks were quite amazing if I’m honest as well. They did quite a bit off screen though, which I’m fine with if you cannot make it look as real as you want. The cinematography was fine for me also.

The last thing to cover would be the soundtrack of the film, which didn’t really stand out to me. There’s a main theme for the film that they use throughout that definitely has an eerie sound to it. That would definitely be a song that I would listen to on a regular basis when writing.

Now with that said, this film is one that I thought had an interesting premise. It also has some interesting aspects that it is looking at, but I will admit, they’re a bit too on the nose for me. The pacing of the film is good, it doesn’t waste any time and moves through at a solid pace. The acting is fine, no one really stood out aside from McIntosh. She has just a great look for this role as well. Effects were something I was expecting more from, but what we got was good. The main theme for the film is an odd one, but I really liked it. The rest of the score fit the scenes for what was needed. I don’t think this is a great film, but I did enjoy it. I would say that this film is above average for me.