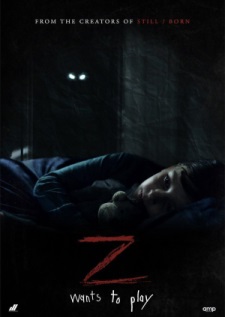 This was the final film for 2019 Nightmares Film Festival. I thought the title of this was interesting and of course, my first thoughts went to this being about zombies. I glanced at the synopsis though and saw that wasn’t the case. I was intrigued by what it was about actually. The synopsis for this is a family find themselves terrorized by their eight-year-old son’s imaginary friend.

We start this off to establish the life of this family. The mother is Elizabeth Parsons (Keegan Connor Tracy). She is married to Kevin (Sean Rogerson) and they have a son Joshua (Jett Klyne). Elizabeth is pretty close to her sister Jenna Montgomery (Sara Canning), but she is struggling in her life. They’re mother is dying, Alice (Deborah Ferguson) and Jenna can’t handle seeing her.

Joshua’s best friend is Daniel Cadere (Fox Rose) and Elizabeth is friends with his mother Georgia (Chandra West). Things take a turn though when Joshua makes a new imaginary friend named Z. He wants food to be put out for it and for him to be acknowledged by his parents. Elizabeth is troubled by his where her husband doesn’t see anything wrong it.

That is until Joshua starts to have issues in school with his grades and with not getting along other kids. No one wants to play with him anymore and after attacking a couple students, he gets suspended. They take him to a Dr. Seager (Stephen McHattie) who doesn’t think there’s anything wrong until he hears him say the name of the imaginary friend. He then looks trouble.

Elizabeth learns some troubling news from her past and that sees things herself. The question becomes, the bad things happening because of Joshua or is his imaginary friend not so imaginary?

I will say that this film did have me intrigued with what they were going for. I didn’t necessarily have an imagery friend. I do actually talk to myself to help keep things in line so I don’t forget even today. It is interesting dynamic here as well, is the child doing all of these things or is there really an entity communicating with him. This is actually fitting since we’ve gotten films like The Prodigy or The Hole in the Ground where we are tackling similar concepts of weird children.

There was actually an interesting back-story that I got interested in. Elizabeth is going through things at her mother’s house and comes across an old tape of her. I bring this up, because she had an imaginary friend that is also named Z. Unfortunately though, I don’t like where it goes from there. It gets really creepy and then Elizabeth comes up with a weird way to deal what is going on. It didn’t work for me if I’m honest and I kind of checked out at that time.

The one thing good that comes from it though is Jenna having growth. She can’t see her mother when she is dying as it is too hard, but I really like that when she’s tasked with watching over Joshua, she steps up. The problem though is that she’s not the main character and really just more of a secondary character. I did like though Joshua and the rage he starts to exhibit when he’s separated from Z.

I’ve kind of already alluded to this, but the pacing does have its issues for me. We get a runtime of around 90 minutes if I remember correctly. That’s not the problem. I think we get a good build up to start this and I like how creepy it starts to go. There are some really shocking things that happen along with filling in the back-story. It is the later part of the second act and into the third where I had problems. It lost me during that stretch so by the end it didn’t really affect me if I’m honest.

Shifting to the acting, I didn’t have any problems there and thought they were pretty solid across the board. Tracy is interesting as I’ve seen her in a couple things, but never in this type of role. She doesn’t come off as the most loving mother and it is intriguing that she as she feels like a mother who would be against medication. I do think there’s a part of this that she experienced things with her mother so that could explain it. Klyne is fine as a child actor. He doesn’t really do a whole lot and the creepier parts are more due to the writing than anything. Rogerson is solid as the husband and Canning is fine in support. I did like to see McHattie and West in their cameos. I’ve seen them in other things so I enjoy their abilities. The rest of the cast rounded out the film for what was needed.

That will take me to the effects of this one. I really like the practical effects that we get here. They can be subtle with toys or things in the dark making it look like glowing eyes. It is just something eerie that makes you think Z could be real. There’s a shocking moment dealing with a staircase that made my jaw drop. I also like that we get a glimpse of something that could be Z or it could be your imagination. There’s a bit of CGI, but I didn’t really have any issues with it. The film is also shot well in my opinion.

The last thing I’ll cover is the soundtrack. For the most part I didn’t notice it, but it also didn’t take me out of the film so there’s that. I do have to give credit though in that there’s this creepy toy that is to help children learn the alphabet. It keeps saying Z over and over, but we can hear it from another room. There’s something wrong with it and it definitely made me feel uncomfortable.

Now with that said, I did like the premise for this one, but it ultimately falls short for me. Having this child have an imaginary friend that could actually be a supernatural entity is something that I can get on bored with. There are some good effects that we get glimpses of that help build the tension. The problem becomes that it takes a weird turn and it lost me. The acting though I would say was good and the soundtrack fit for what was needed, but the sound effects of that toy I really have to give credit to. Overall I’d say this one doesn’t really do anything new, but if you’re into films like this, I think you’ll at least like it. I would say this is above average. Without the missteps I really think this could have been really good.