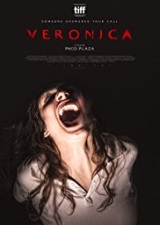 This film starts with a 911 call to the police. This is taking place in Madrid, Spain. We see two police officers rushing to a scene of a crime. The two officers are Chema Adeva and Miranda Gas. We then cut away to three days into the past, before the events took place. This also is happening in 1991.

We have a teenage girl waking up, Sandra Escacena. She wakes up her three younger siblings in order to get them ready for school. There are twins, Bruna González and Claudia Placer. They share a room with bunk beds. There is also a brother, Iván Chavero. He has issues with wetting the bed and Escacena has to change his sheets. She has Placer, who is currently in the shower, help Chavero get cleaned up. They need negatives from pictures as there is going to be a solar eclipse that day. To get some, we see an interaction with Escacena going into her mother’s room, Ana Torrent. She sees a picture of her father, who has passed away, before she takes the negatives.

Escacena helps her siblings get to school where there is a heartwarming scene where Chavero apologizes for wetting the bed. We then see Escacena in class. She goes to a Catholic school with Consuelo Trujillo being the teacher. Their lesson is on solar eclipses and it covers primitive cultures thought it was best to do sacrifices during them, thinking it was the Gods that made the event happen and they needed to be appeased. We meet Escacena’s friend, Ángela Fabián. They are planning something during the eclipse and she wants to know if Escacena brought something. She confirms she did.

They sneak off when every one else goes to the roof. Fabián reveals that she invited another girl, Carla Campra to join them. This kind of bothers Escacena, but they go to the school’s basement. It is there that they attempt to use an Ouija board. Escacena wants to communicate with her dead father while Campra with her dead boyfriend. They get the board to work, but it freaks them out. As the eclipse happens, the other two girls are burned by the glass they are using. Escacena keeps her finger on and it starts to move around rapidly. It stops on the image of the sun and then the glass shatters. She starts to bleed and the book they brought sets on fire. Escacena passes out.

She comes to in the nurse’s office. The nurse asks some questions about her and during this it is revealed that she is 15 and still hasn’t had her period. She is allowed to leave and meets up with her siblings. They swing by the bar that Torrent works at to collect food before going home. It is during this dinner that Escacena has an episode where she cannot move her arm to eat. She then vomits on herself. She comes to after, not realizing what happened.

She starts to have horrible nightmares of a dark entity being after her and her siblings. It goes away when her mother comes home. Fabián starts to avoid her and Escacena starts to descend into madness. No matter what she does, she can’t seem to stop the entity. She does start to see an old blind nun who gives her advice.

Can Escacena figure out how to stop what is happening around her before it is too late? Is there anything really happening or is she going crazy?

Now I will admit, I saw posts and things about this film before seeing it, so I was worried due to the hype. I will discredit that first. This film isn’t the scariest thing I’ve ever seen. I had no trouble getting through it. Am I the normal horror fan? No, but I also know that was overhyped. With that out of the way, I liked this film. I think the story is actually quite deep. We have a teenager, who is forced to grow up faster than she is ready to and urns to not give up her innocence. I don’t blame the mother, because her husband passed away so she is working her tail off to provide for them. I don’t fault either side, it really had me engaged. Going from that, I love that you aren’t completely sure that she is possessed. We see the entity throughout, but the ending shows what Escacena’s character is seeing and what the siblings are seeing. We also get what Adeva’s character saw, believed and put into his official report. I thought that was a good touch, because I do run into issues with films claiming to be ‘based on true stories’. I really enjoyed the ending and how it played out as well.

The acting was pretty good in my opinion. Escacena did an amazing job. This is even more impressive that this was her first film. I was engaged with her and feeling sympathy watching what she has to do with the family. I also thought her performance at the climax through the ending was solid as well. The children I’ll put together here as they were solid in support. They are the normal annoying siblings, but even more than that, they show true fear when Escacena tells them what she sees. They also believe so much in her for what she does that they defend her to the mother. Torrent was solid in the supporting role she had as well.

As for the effects of the film, I thought they were well done. I believe they were a combination of CGI and practical. The parts that were CGI looked realistic to me and I had no issues there. For the practical, as many of you will know I am a big fan of. I had no issues there. The editing of the film was good as well. It built tension from the opening scene as we are filled in with what happens. I thought the climax and the reveal were solid and helped my rating. The score didn’t really stand out to me, but it definitely wasn’t a negative.

Now with that said, I feel this film despite its hype is still worth a viewing. I really dug that they did something different with the possession type film by having a deep underlying story of a teen forced to grow up before she should. The film also does well in showing that her mother is working hard to provide so you don’t hate her either. I thought the reveal, climax and ending were all solid as well. The acting I thought was really good, with Escacena having an amazing performance. The effects were both practical and CGI, which I had no issues there. The editing of the film builds the necessary tension and the payoff was worth it. The score didn’t really stand out, but doesn’t hurt the film either. I will warn you that this film is from Spain, so I had to watch it with subtitles on. If that is an issue, then avoid this. If not, I definitely recommend it as this film was good in my opinion.