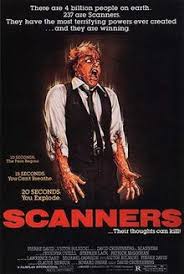 There was a stretch when I turned 16 that I would drive myself to the video store to rent films. I had a thirst for horror films I hadn’t seen and was trying to build my base of horror knowledge. One of them was this film. The VHS case of Michael Ironside with the white eyes had me hooked. I’ve seen it now a few times, with the last being in the theater. To get into this, the official synopsis is a scientist sends a man with extraordinary psychic powers to hunt others like him.

We start off meeting our main character, Cameron Vale (Stephen Lack). He is homeless and is walking through a food court, eating food off of leftover trays and stealing cigarettes. There are a couple of women who are mocking him and Cameron does something to one of them. With his mind he causes her to go into a seizure. Two men chase after him, knocking him out with a tranquillizer dart. He wakes up in a room and goes crazy. He hears a bunch of people talking, but no one is moving their lips. Watching over him is Dr. Paul Ruth (Patrick McGoohan).

The film then takes us to the one of the most iconic scenes. There are those that are known as Scanners in this world. They have psychic abilities where they scan your mind and also use theirs as a weapon. This Scanner asks for volunteers to tell you what they are thinking. One man offers to come up. As the scanner tries to read his mind, the other man does something back to him until his head explodes. It turns out this man is Darryl Revok (Michael Ironside). He is the most powerful known Scanner in the world.

The company that Dr. Ruth is working for is trying to do a program that will use Scanners. It is being shut down by the new head of security, Braedon Keller (Lawrence Dane). Dr. Ruth in one last effort sends Cameron out into the world to try and join Revok’s secret Scanner organization.

As I kind of lead into earlier, this film was one of the first horror films that I checked out without my father’s recommendation. I did come to find out that he is a fan of this film as well as my mother when they saw it in the theater. The first time I saw it, I was a little bit bored as it is really story driven. After a few viewings now, I couldn’t be more wrong. This has a feel of a spy/espionage film. Revok sends out assassins that show up wherever Cameron is. He and the other Scanners around him try to use their abilities to survive.

There is also a drug that is used to suppress the Scanners’ abilities. In the investigation by Cameron it leads to the company that produces it. Dr. Ruth is the originally owner of the company and there is a large plot that involves him and Revok. I found this to be quite interesting and the implications that come with it.

I do feel that the film is paced well. It clocks it at around an hour and 45 minutes, but to be honest, it really doesn’t feel that way. Cameron is on the run pretty much the whole film and I think that helps with the pace. The more he discovers the deeper that the plot actually becomes. It gets pretty exciting and it does have its lulls as well. It culminates with a great showdown in the end, which is quite iconic.

Now the acting is something that is really good. I thought Lack was solid in his role. The only thing that I thought was off was how quickly he learns to control his power. The film states that scanners are usually like Cameron in the beginning. Due to being unable to control their powers, they end up being homeless as they can’t function like normal people, which fits his character perfect. Jennifer O’Neill plays Kim Obrist who is a female scanner. I thought she was pretty good and was easy on the eyes as well. McGoohan is fine as the doctor, but I also like the deeper plot of his character. Dane was also solid as a villain. His role is also quite interesting in the overall story. This brings me to Ironside. I recently heard an interview with him and he was only signed on for one day of shooting. He did so well that he became the main villain. This film helped put him on the map and he was great. I couldn’t imagine it without him featured as prominent as he was. The rest of the cast round out the film for what they needed as well.

This film is really strong when it comes to the effects department. Writer/director David Cronenberg is known for his body horror films. The iconic scene I referenced earlier was due to the head explosion. It looks so real and it is quite amazing. The film is also quite subtle in some of the effects as well. We see a lot of needles going into arms, which kind of makes me feel comfortable to see. The final battle scene is also great and seeing the veins on both men pop out and little spots of blood pouring forth. I could go on and on, but the effects are practical and look great.

The final aspect to cover for this film is the soundtrack. Now the music for the film really didn’t stand out to me. The film is really good though in the use of a tone when someone is using their scanner powers. It is high pitched and during the final battle it is full blown. I also really like this aspect of the film. The other is that scanners can hear the voices of people’s inner thoughts. I thought they did well at showing this also.

Now with that said, this film isn’t my favorite Cronenberg, but it doesn’t mean it isn’t good. I think this film has an interesting story. I like the idea of people with this psychic ability and the deeper story that unfolds around them. It is interesting, because it does feel like a spy film for a good portion of it. The film does hit some lulls before getting right back into the action. The acting is great as are the effects of the film. I also like the use of the sounds for the film. The rest of the soundtrack didn’t really stand out, but it also doesn’t hurt the film. I think this is a good film and definitely worth a viewing.