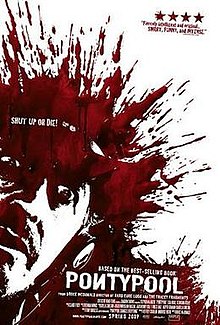 This was a film that was on my list of films to check out and when I heard podcasts talking about it. The concept of this intrigued me. I’m a fan of zombie films in general and heard that this movie had things that were very similar to them, so I wanted to give this a viewing. I’m updating this after a second viewing for The Podcast Under the Stairs’ Summer Challenge Series for the 2000s when I was on the People’s Council. I’m now on the actual show for this being a potential pick.

Synopsis: a radio host interprets the possible outbreak of a deadly virus which infects the small Ontario town he’s stationed in.

We start this off hearing the voice of the lead, Grant Mazzy (Stephen McHattie), as he is telling about a missing cat named Honey. We then see him driving and it is snowing heavy out. He pulls off to the side to check this cellphone that he just threw and there’s a strange woman at his passenger window. She is saying something that he can’t quite make out but it is unnerving.

He then gets to the radio station he works at. He is the morning host and he works along with Sydney Briar (Lisa Houle) who is the main producer and Laurel-Ann Drummond (Georgina Reilly). He was a big-time host, but he is now at this smaller station and he’s not overly happy. He’s rude if I’m going to be perfectly honest. I get the idea though he’s bitter about where he’s at. He got fired from his last gig for being too outspoken. Grant is pulling top dollar, but it is in the middle of nowhere town called Pontypool.

Things take a turn when they go to their meteorologist, Ken Loney (Rick Roberts) who tells them about an incident where a large group of people are outside of a doctor’s office. They’re attacking it and people are dying. They cut away from it and this upsets Grant. They have their job as a radio station for a small area that brings certain obligations, so there’s not a lot they can do.

He gets another chance though as this story isn’t going away. They get Ken back on the phone and then the BBC gets involved along with the military. Grant broke the story over the airwaves where people are going into a zombie like trance where they can’t speak normal and start to attack those that are not infected by this. What is wrong with them and can they survive what is happening.

Now this is a film that’s hard to recap without spoiling so I decided to go a little bit vague here. As I said, the creatures in this though are zombie like. The writer Tony Burgess also wrote the novel and Bruce McDonald is the director. I bring them up as they call the things in this movie, conversationalists. As I said, they’re like zombies, but this has a twist that it has to do with language.

What is interesting is that we are given this story through the call-ins to this radio program. I liked this take on it as we are hearing Grant along with the two women he is working with as they’re trying to figure things out around them. The information coming in isn’t always confirmed. They’re relaying as people calling into the station so they’re doing it on air. Since language has to do with the transmitting of this, I think that it makes this even better since he is literally using a forum that is only talking. The story is contained being inside of this studio which I think is in the basement of an old church. This creates a claustrophobic feel on top of it. My most recent watch was with a commentary. It was Burgess and McDonald that were chatting about the movie. They mostly were talking about the plans for part 2, which hasn’t been made yet, but they wanted to keep this one contained before expanding on things. I wanted to share that as I felt it was smart.

Something else that intrigued me is that it is only the English language that is being infected. Now it isn’t the whole language, just certain words. I’m not surprised by this as English is one of the most difficult languages so it is fitting. There’s something interesting that gets played with here as well. As I said, it is certain words. Once the infected word is heard and said, the virus spreads. That person starts to repeat the word until they’re then completely infected. The virus then wants out so they need to search out a victim. Something that gets established later is that those infected need to find a victim or ‘suicide’ themselves if they don’t. This is different take on virus/infected movies for sure.

I’ve already started going into this, but the pacing is good here. I think it works with establishing our main three characters along with the secondary characters to build the story around them. I was watching this with my girlfriend the first time and we both agreed that our anxiety went up with how this is presented. It is subtle though. This gets more unnerving as our group gets trapped inside the station and their program is drawing the infected. I want to read up more though as I’m not entirely sure I understand the ending and the virus itself I was a bit confused about still. This novel is on my short list of things to check out. I’ll be honest, I still don’t fully understand it with multiple viewings.

As for the acting, it is good. McHattie is an actor that I’m a big fan of and I’m not sure I’ve seen him in a role that I didn’t like. I love the arrogance he brought to this character. He wants to make waves, but when this story happens his journalist integrity comes out to do the right thing. He only ‘acts up’ when he’s bored. He also believes he’s better than what he’s doing. There is the interesting angle that thing he’s doing might be what kills other people as well. Houle was also good as his ‘rival’. They don’t hate each other, but they bump heads and I think that was needed to build tension. Reilly was solid as the one caught in the middle of the two. Roberts’ voice was good since we never meet him. Hrant Alianak as Dr. Mendez works as our doctor to help understand more of what is happening. The rest of the cast rounded this film out for what was needed.

The effects are what I’ll shift to next, which were good. We don’t get a lot of them, but there is a sequence that involves Laurel-Ann that made me cringe. What they do with her looked quite real. The other creatures looked fine with each of them being distinct. If there’s any drawback, we don’t get a lot of interaction between our characters and the infected. I understand it isn’t that type of film though. I’ll also credit the cinematography in building that claustrophobic feel.

In conclusion, this is a film that I rather enjoyed quite a bit. It does well in building tension of the mystery with what is going on. It got my anxiety going through the pacing and good acting. There’s not a lot in the way of effects, but it was a film that didn’t necessarily need them. I like the idea of this virus and how it is transmitted, even though there are questions still about it that I still have. The soundtrack didn’t stand out, but it fit for what was needed. The sound design though is on point. I don’t necessarily know if everyone will enjoy this as much as I did. There’s not a ton in the way of action so keep that in mind. It is more of a slow burn. I would say this is a good movie for sure.