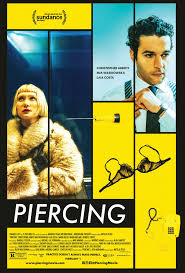 This was a film I heard about in some of the horror groups I’m a part of. It’s been tough going trying to find horror films released this year and I was glad to see this one come to my theater. The other thing was if this film was horror or not. That is something I’m going to cover as to why I think this one is. The synopsis is a man kisses his wife and baby goodbye and seemingly heads away on business, with a plan to check into a hotel, call an escort service, and kill an unsuspecting prostitute.

As the synopsis states, we start in the home of Reed (Christopher Abbott). He lives with his wife Mona (Laia Costa) and their baby. We see him looking down at his child with an ice pick. His wife wakes up and asks what he is doing. He tells her to go back to bed and does the same. He goes off on business and checks in with his wife when he arrives.

When he gets there, we see him practicing his real plan is. He then calls the escort service to see if he can get his girl to show up tonight instead of the following night. He is informed that she isn’t available until later, but there’s another they could send in her stead. He agrees with this.

We then meet the escort that is coming over. She is asleep and she takes some time to get ready. Her name is Jackie (Mia Masikowska) and while she gets prepared, we hear a voice over of her handler. She then gets into a cab to come over.

Things take quite the turn when Jackie comes up to the room and meets Reed. He has rehearsed how the events will play out, but she gets uncomfortable. She goes into the bathroom to shower. Reed checks on her to find her stabbing herself in the leg with scissors. Reed gets her to calm down and then goes about helping her. He takes her to the hospital and has to decide what he will do, wait for her to finish his plan or call it. The problem though we see she isn’t the most stable, but things are much worse.

Now this was quite the interesting film. I can see why some won’t consider this film to be horror. The first thing that makes it for me is that both of our main characters are crazy. For Reed, I don’t know if some of things that happen to him really do or just in his head. At first, I thought this might be the first time he is going to kill someone, but he is haunted by his past victims. It doesn’t necessarily mean he really did kill them or if he just thinks he did. I did like meticulous nature he has, which is somewhat common for serial killers. He goes through everything that he is going to do and gets quite nervous when things don’t go his way.

On the other side, we have Jackie. She comes off first as eccentric. She seems like someone that really had issues connecting with people. Things take quite the dark turn when we see her hurting herself in the bathroom. This was graphic and really made me cringe. Going from there though, she has Reed come back to her place; we see that she is much crazier than we thought. She does use her sexuality to disarm him and then seduce him. I like when Reed brings back wanting to tie her up, she comes up with other things to do instead. There is a turn in this film I wasn’t expecting and I really liked it. It really makes this film.

Another aspect to this is showing the buildings around the two rooms we mostly focus on. The buildings are done with models and it almost tells me that we have our little compartments that we live in. Jackie screams a couple of times and the only one of the times is Reed called and they think it is the volume to his television being up too loud. I like this concept that we don’t help others, we expect someone else to do it. We are all a little part of this much bigger world and we get lost in our lives.

Next I’ll move to the pacing of the film. I thought it was good for the most part. The film has a really low running time. It is listed at being 81 minutes and I’d say there’s a good ten minutes in the opening and closing credits. This film is quite tight for the most part. It builds suspense and tension. I will admit, there was a lull where things got a bit weird in the third act. I did like the ending and the implications that could play out from it.

Acting was something that was really good. This is really a character study of these two different types of psychopaths. Abbott was good in having a somewhat of a timid nature, while still having these vivid fantasies. It makes we wonder how much of the things he hears are real and how much of it is his own psyche projecting it. Masikowska plays such a dirty character in this film and I love it. I’m a fan of hers and I like this character. We see that she is odd. While seeing some of things she does, it make me wonder what she had gone through and see the reveal of her true nature was both horrifying and satisfying. The rest of the cast round out the film for what was needed as well.

This brings me to the effects of the film. I loved that the film went practical for the most part. The scene in the bathroom looked quite real to the point that my hands went numb. I was squirming in my seat in the theater and loved it. The only issue I had was I think there would be more blood than what we got. The wound just seems to stop bleeding. There are also some CGI during a later sequence. I didn’t mind this, especially for the reasons as to why it is happening. The film is also shot beautifully and I loved the look of the buildings from the outside. It gives a feeling of things being so insignificant which is fitting for the film.

Another aspect to the film that I really dug was the score. In one of my groups I saw a couple people I respect talking about two of the selections from some of my favorite Dario Argento films. I love that this film used songs from giallo films, as they really give the film a different feel. It is even more interesting that they are used when we are seeing Reed. It is fitting for what he is planning, as it isn’t too different from kills you’d see in those types of films. The score isn’t original, but it is definitely used to its fullest and fits what they were going for.

Now with that said, this was a film that I came in excited to see and I liked what I got. I thought the concept of the film was really good. It is interesting with what happens with it and I thought the ending has some good implications. The pacing of the film is solid for the most part. The acting was really good and I thought both of the leads did a great job. The effects were good, but I did have some very slight issues. The score of the film was quite amazing, especially using two songs I listen to on a daily basis. The film isn’t as violent as I thought it would be, but I don’t think this one is for everyone. I would say that this is a good film and if this sounds interesting, give it a viewing.