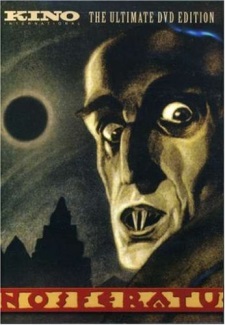 The first time I decided to check this film out was in college. I had taken an Intro to World Cinema and early into it we watched the German expressionism classic of The Cabinet of Dr. Caligari. It sparked me to finally seek this movie out, even though I had known of this one since high school. The official synopsis is vampire Count Orlok (Max Schreck) expresses interest in a new residence and real estate agent Hutter’s (Gustav von Wangenheim) wife.

This movie is an unauthorized version of Dracula. Much like from the source material, this film is starts with Hutter being told that a Count Orlok is looking to buy property in Wisbourg. He is to go there to get the documents signed by him. The man telling him to go is Knock (Alexander Granach). It is on his journey through to Transylvania; he learns that no one will go to Orlok’s castle at night and it is the land of phantoms. There is a book in his room that tells the lore of a vampires and Hutter takes it with him. At first, he thinks it is funny. He does finally arrive to meet the creepy looking count. While they’re going over documents, Orlok sees a picture of Hutter’s wife Ellen (Greta Schröder). It is soon after he learns he is a vampire and is bitten by him.

Orlok gets his things sent to Wisbourg, which contains coffins filled with dirt, rats and himself. When the ship arrives, they find it empty and they think that the plague has come to their town. Also in town is Professor Bulwer (John Gottowt), who is an expert on vampiric things in nature. There is an interesting scene to introduce this with Venus fly traps.

What is interesting about this version of the tale is that director F.W. Murnau and writer Henrik Galeen did take the most basic idea of Dracula but leave a lot of it out. They cut out two of the main characters from their version. They also take out pretty much all of the romance as well. The only thing we get there is what the book states will kill the vampire. Something I found interesting is how to kill a vampire as this film started the mythology that sunlight can kill them. It does appear that Orlok cannot make new vampires. He bites Hutter and he is just weak as well as feverish. Once he has rested, he seems normal to me. I take it that Orlok just needs the blood to survive.

Something I thought this time around, the movie is focusing on the plague quite a bit. We are seeing news reports through the newspapers about ports needing to close to prevent the spread. That is what they think is on the ship that is bringing Orlok to Wisbourg. Once there, it is a public health announcement to quarantine to prevent not only getting it but spreading it. This is interesting to watch during a pandemic to be honest. We get some iconic scenes throughout this to be honest.

Moving from the story, I’ll go to the acting in this film. It is anchored by the amazing performance by Schreck. He makes this film more terrifying than most of the vampire films out there. His look for this film inspired Kurt Barlow in Stephen King’s Salem’s Lot, which is one my favorite novels. He doesn’t get a lot of screen time in this film, but when he does, he commands it. Wangenheim and Schröder were fine as the couple that are the focus. Schröder has an interesting part to play in that she is having nightmares while Hutter is away. This bothered me at first, but I like that those that known of him or are connected are haunted by this presence. It is an interesting concept. Granach also did well as the servant to Orlok. There is an interesting concept there about capitalism. The reason that Hutter is sent to him. It is the plan for him and Knock to get rich off him. Being when this was made in Germany, it makes it feel slightly like propaganda. He also had a creepy look about him.

There is an issue that I want to bring up here. There are some things that are visited, but not fleshed out. We have Ruth (Ruth Landshoff) and Professor Sievers (Gustav Botz), who Ellen stays with when Hutter goes to Transylvania. We don’t do much with them aside from that. We also have Professor Bulwer, who is supposed to be our Van Helsing. He introduces the idea of vampirism to his class and that’s about the extent of it. I get that they didn’t want to borrow too much from the novel, but I think this is a misstep to be honest.

From here let’s go to the effects of the film, as there weren’t a lot used. This was early in the film making process. We do get the death of Orlok which was solid. There are also doors that open on their own by him which I thought was fine for the era. It adds a level of creepiness. It was shot very well on top of that. I like the use of filters to simulate darkness, especially like when a candle goes out in a room. Impressive for the time. This falls under the German Expressionist movement. It isn’t as extreme as The Cabinet of Dr. Caligari, but it still has the aspects of it.

Finally, I’ll go over the soundtrack of the film which is interesting. The first time I saw this film it with a traditional soundtrack of classical style music. I thought that fit the film perfect for what they needed. I do always wonder if this was what was originally synced up with these silent movies. My second viewing was the Industrial Gothic Remix, which had more of a rock soundtrack. I thought at times this made it even more eerie. There were also times when they stuck to the song they were using, probably for licensing issues and it didn’t always fit. Either score you watch it with adds something to the film, even though they are both entirely different.

Now with that said, I really enjoy this film. It is the first adaptation of Dracula even though they didn’t have the rights. It is a condensed version. I do think some of that hurts the story of this film. It is an interesting look at the past and what people thought when unexplained events happen. Schreck was great as the vampire and the rest of the cast were solid. The film is shot very well, especially for the era. The soundtrack to the film fits, even with two different ones I’ve seen. This movies rates high due to its historical value as well. This is a really good film in my opinion.