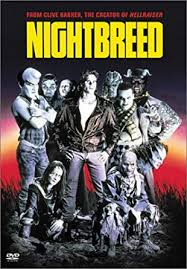 This was a film that I remember seeing the VHS cover when I would go to my local video store. It always intrigued me, but for whatever reason, I never pulled the trigger on checking it out. When I really started to get into horror podcasts, this was definitely a film that was a hole in my viewing history that everyone seemed to talk about. I checked this out as prep for a series of shows on one of those podcasts to find the best horror films of the 1990’s. The synopsis is a troubled young man is drawn to a mythical place called Midian where a variety of friendly monsters are hiding from humanity. Meanwhile, a sadistic serial killer is looking for a patsy.

We follow in this film Aaron Boone (Craig Sheffer). He has dreams of monsters and them going to a place called Midian. His girlfriend, Lori Winston (Anne Bobby), is there for him, but she also knows that he has some mental issues. He seems to have recovered somewhat from them, but does bring up that he should reconnect to check in with his doctor. It is then that he calls, Dr. Philip K. Decker (David Cronenberg). There is something odd about him.

In their town there have been a series murders. We see that the killer has a great mask with buttons for eyes and a zipper mouth. Boone goes to see Decker who blames Boone for the murders. He states that all of the dreams Boone told him to match up. Decker gives him lithium to help him calm down. They in turn make him hallucinate though and he ends up getting his by a truck as he wanders.

At the hospital, Boone meets Narcisse (Hugh Ross). He is a crazy person who thinks that he knows the way to Midian. Boone asks how to get there and the man tells him if he will take him with him. Before he can go though, he takes out finger knives and removes most of the skin on his head. A detective Joyce (Hugh Quarshie) shows up and Decker blames Boone for the murder and the other ones committed.

Boone flees to Midian, but they don’t accept him. He is bitten by a monster. The problem is that he also leads the police there as well. Decker gets the officers to shoot and kill Boone. He doesn’t stay dead and he might actually be a Nightbreed. All the while, Lori follows the trail to Midian looking for Boone. Decker is determined to wipe out the Nightbreed and goes about getting an army of men to do just that.

Even though this is my first watch of the film, I actually read the book that writer/director Clive Barker adapted this from without realizing this film was based on it. The events of the book actually make for a great adaptation in that section of the story. It is interesting as it is quite short, but visually can show us so much and that is exactly what we got here.

It was about halfway through this film that I really saw what it was going for. We have monsters that are hiding away from humans in their own world. The problem is that humans are garbage by nature. If they knew that the monsters existed, they would hunt and kill them. That is where this film is leading, which that is a bit of a spoiler, but it is also quite obvious as well. Even more interesting is that the monsters do eat human flesh, but by nature they’re not aggressive. Decker on the other hand is a monster in terms of a human. This film really is exploring the concept of who are the real monsters here.

There is also something to be said in this film for the fact that we have these creatures that are outcast from society. Now it is hard to completely defend them as they do eat humans. Predators and prey don’t normally live in harmony. But these monsters are just different from us and going back to humans are garbage, we hunt what we don’t understand and what we fear. We also get a bit of people not being accepted as well, which we see first with Boone and then with Lori. There’s that distrust of those that are different on both sides.

The film actually has a lot of subtext and underlying themes here. For a film that runs 2 hours, it really doesn’t feel like it. To be honest, I would have been fine with a little bit more as we really don’t get introduced to the monsters as I would like. I know that Doug Bradley was in this film, not entirely sure who he was though. This is a slight issue I have. As for the actually pacing, it does get right into things and builds the tension to the great climax. I really have no issues there and I thought the ending was good as well.

On to the acting of the film, which I also think is good. Sheffer plays the role a bit subdued, but it actually works for me. Part of this is due that he’s had some mental issues so he doesn’t completely trust what he is seeing for a stretch. I think that is really a good way to go about it as I’m a fan of an unreliable narrator. Bobby I thought was fine in her role. They don’t give her much depth in my opinion. Cronenberg I do have to say is absolutely amazing here. He says so even keel and yet he is the true monster of the film. Charles Haid is Captain Eigerman and he fits the film for the manly police officer who will not stand for what is happening in Midian. Quarshie I thought was good and the rest of the cast rounded out the film for what was needed. Shout out to all the actors who were monsters. They brought such differing things for their unique characters and I really just want more of that for my personal pleasure.

Effects of the film were something I was excited to cover as well. I think for the most part, they are absolutely amazing. The different monsters look unique and to be honest, I can’t think of one that didn’t have me intrigued. That is something else about the film was there was so much time and effort going into them that it blew me away. They were done mostly practical, with a bit of it done with other effects as well. That didn’t always look great, but there wasn’t enough for me to harp on it. The film also was shot very well.

Now with that said, this was a film that had been on my list of films to see for awhile so I’m glad that I finally got the chance. I think that the concept is great and the deeper allegories are something that really pulls me in as well. I think the film is paced well that even the 2 hour runtime doesn’t bother me. It builds tension to a satisfying conclusion. The acting I think is good for what they needed and the effects look amazing. The soundtrack of the film really didn’t stand out to me aside from the cheesy song by Bobby. It doesn’t hurt the film and it definitely fit for what they needed. I would say that overall this is a good movie and would recommend giving it a viewing. I would especially say if you’re like me, this was one that you had missed previously.