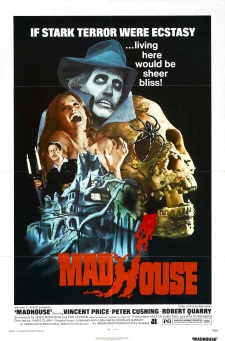 This was a film that I never heard of and actually sought it out, because I saw it had Vincent Price and Peter Cushing in it, two actors I really like. I actually didn’t even know what this was about and coming in completely blind. The synopsis is a horror movie star returns to his famous role after years in a mental institution, but the character seems to be committing murders independent of his will.

We start this film off learning this first sequence is in the past and in Hollywood. They’re at the house of Paul Toombes (Price). They’re celebrating his latest movie being a big success. He’s actually a horror movie star and his iconic character is Dr. Death. At this party, he reveals that he’s marrying Ellen Mason (Julie Crosthwaite), much to the displeasure of Faye Carstairs (Adrienne Corri), who I believe previously dated Paul, and Oliver Quayle (Robert Quarry). Also at the party is the writer of the Dr. Death character, Herbert Flay (Cushing). Oliver pisses off Paul by revealing that his fiancée used to star in pornography. Paul is rude to her and he goes up to his room. She does the same, but someone dressed as his character murders her.

The film then shifts into the present of the movie and in London. Paul has been in a mental hospital since the incident. He is freshly out and Oliver is going to do a Dr. Death television show starring Paul. He has Julia Wilson (Natasha Pyne) meet him at the docks when his ship arrives.

On the ship Paul has an encounter with Elizabeth Peters (Linda Hayden). She wants to be famous and she thinks sleeping with him will help her career. He kicks her out of his room, but he notices a watch that was a gift to his late fiancée is missing. Elizabeth is persistent even when they arrive in London.

Also living over here is Herbert. He has since married Faye, but she has lost her mind after she was in a horrific attack and car accident. She stays mostly in the basement and has a bunch of spiders. She also still is in love with Paul.

The murders start up again in London with Paul being the prime suspect as it is his character that is doing the killing. The murders are also taken straight from his old movies, but is it Paul or someone else?

The first thing that struck me is that this film has the feel of a United Kingdom/United States giallo. I know the purist of that subgenre are probably thinking that’s blasphemous, but we have a blacked glove killer. It is a murder mystery, has a meta feel and there’s some red herrings. The only thing is that the main character isn’t working with the police or trying to figure out who the killer is. Paul is literally just trying to keep from losing his mind while this is happening around him.

Now with that said, I really like the mystery here. I love that they mirrored Paul around the guy playing him. They even use clips from his old movies when they’re showing films in the movie itself. It is such an interesting meta thing to do and I really dug that. It works even better that the killer is using deaths from his movies, which in turn makes him a suspect as this is also the character he was in these pictures as well. I will say though that I guessed who the killer was halfway through and ended up being right. The problem is there aren’t a lot of people it could be and they start to kill some of them off so that really hampers the movie. I do think this might have worked a bit better to have another red herring or two.

Even though I guessed the reveal, I do like the how the film is paced. It doesn’t take long for that initial kill and we don’t have to wait for them to start back up either. That definitely keeps it interesting and the mystery itself had me hooked as well. The reason these kills are happening actually makes a lot of sense so that was good. The ending is interesting and makes me wonder if another character was in on it also. It is pretty dark what is done for sure.

That moves me to the acting, which I’m going to be honest, is great. Price and Cushing are both just masters of their craft. We don’t get a lot of Cushing, but when we do it is great. Price though just commands the screen when he’s on it. He has such an arrogance to him that fit this role. Quarry was also good and kind of a snake. He really made me dislike him, which a reaction is good. Corri loses her mind after the trauma that happened to her, which I definitely liked. She has an interesting look too. I also thought that Pyne was good in the role that she had. Hayden is quite attractive and we see her half naked, which I enjoyed. I’d say the rest of the cast rounded this one out for what was needed.

That takes me to the effects, which I was slightly disappointed by. We don’t get a lot of them, which I can forgive, but the ones that we do I had some issues with. The blood looks good, but the wounds don’t. We can clearly see a death by a pitchfork doesn’t actually pierce the skin. I think they probably should have hid them a bit better if they couldn’t make them look better. They were done practical so I will give them that. There’s also what looks like a dummy that was pretty obvious. I’m not going to harp too much on that, but I also think that before that we can see the person breathing when they should be dead. The film though is shot well and I had no issues there.

With that said, this film has a good mystery to it and that really sucked me in. I personally feel that this is quite giallo like. I did predict the reveal, which does hurt this a bit and I think another red herring or two would have fixed that. It is still paced in a way that holds your interest until the solid ending. The acting is great, but I had some slight issues with some of the effects. The soundtrack didn’t really stand out to me, but it didn’t hurt it either. There’s also a pretty cool meta feel with Paul being a horror movie actor and the deaths are from his movies. I felt this was above average and worth a viewing if this sounds like something you’d be interested in.