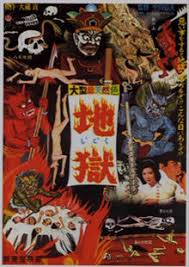 This was a movie that I’ll be honest, I never heard of until I was looking through movies from the year 1960 and came across this one. It intrigued me since it had a good score and it was part of the Criterion collection. I figured that when Jaime and I watched a movie, this might pair pretty well with it for an episode of Journey with a Cinephile: A Horror Movie Podcast as a Journey Through the Aughts. The synopsis here is a group of sinners involved in interconnected tales of murder, revenge, deceit and adultery all meet at the Gates of Hell.

We start this movie with some weird settings. It all makes sense once we get to the end we’re at the River Sanzu which is the path to Hell. It is also the border between the land of the living and the dead. The movie then shifts us over to our main character of Shirô Shimizu (Shigeru Amachi).

Shirô is engaged to be married to Yukiko (Utako Mitsuya). Her father is Professor Yajima (Akira Nakamura). We get to see Shirô in his classroom where he is talking about the concept of Hell. I didn’t realize until seeing this that the Buddhists believe in hell and it has 8 levels. I’m also not versed in Dante’s Divine Comedy, but I know he also believed in layers of hell. We get a bit of information about the thoughts on hell here. Sitting next to Shirô we see is his friend, Tamura (Yôichi Numata). He reveals that Prof Yajima is hiding a secret from the war in Malayan and there’s talks that Yukiko will end up pregnant before she marries Shirô as they’re living in sin.

Things take a turn when Tamura shows up to the Yajima’s house uninvited and interrupting them speaking with Shirô. Tamura noticed the clock has stopped, which is a bad omen. Shirô leaves with Tamura and while they’re driving, they hit Kyôichi 'Tiger' Shiga (Hiroshi Izumida). He was drunk and in the middle of the road. Tamura leaves without checking on him despite what Shirô is asking. All the while, Kyôichi’s mother saw what happened and who did it. She is portrayed by Kiyoko Tsuji.

Shirô is struggling dealing with this. He goes to see Yukiko. She has something to tell him, but he’s so agitated, she decides against it. He asks her to come with him to the police station to confess. They take a taxi, but it ends up crashing, killing her. This sends not only Shirô into depression, but her parents as well. It is around this time that Shirô learns his mother is sick so he goes to where her and his father lives as well as work. Before he learns this, Kyôichi's mother and his former lover, Yoko (Akiko Ono) set out for revenge.

When he arrives, he finds that his father Gôzô (Hiroshi Hayashi) is having an affair with Kinuko (Akiko Yamshita). There also seems to be some shady things going on at this place with Dr. Kusama (Tomohiko Ôtani) and a journalist Akagawa (Kôichi Miya). Shirô is also confused when he sees a young woman named Sachiko (Mitsuya), who looks very much like Yukiko.

Alright, now I should lead this off stating that his movie is really weird. I thought my recap would go a bit shorter, but this movie actually has a lot of characters. It really does feel like it is two movies with the first half introducing us to the players and the second half is their punishment for what we’ve seen established. I wasn’t sure where it was going to go from the odd, arthouse start to it. This movie does settle in from there though.

First I want to delve into the feel of this movie. It is quite interesting as I said earlier, I wasn’t aware that Buddhists believed in Hell. After doing some quick research on the topic, they don’t necessarily believe in Heaven, but Nirvana which is a state of mind. There does seem to be a belief that there is purgatory or different plane where if people have committed horrible acts, they will be punished for them.

Going farther with this, Prof Yajima is where I got the information at first of the 8 levels of Hell in their culture. I like that he’s a professor on this, but we never really learn what his religious beliefs are. Going along with this, Shirô and Tamura are in his class while he is giving this lecture. Tamura is interesting to me as when Shirô goes to visit his parents, he just appears. I noticed he was wearing a red shirt and that is when I started to question if he was The Devil or an evil entity of a sort. He’s actually the catalyst for a lot of events here. He’s the one who hits Kyôichi, causing his mother and Yoko to get revenge on him as well as Shirô. The butterfly effect is what happens to Yukiko, her family and eventually Shirô. He likes to commit sins and point out others sins as well, including Prof Yajima. Really seems like the old saying of ‘the pot calling the kettle black’.

Going from Tamura pointing out sins, he also points out the bad omen of the clock stopping at Yajima’s house. Taking this farther, we revisit this motif a few different times, which I like. Once we get to the Hell scenes, there are a few different times we see the spiral come back up. There are a bunch of people that are walking in a circle, forced to call out in agony for all of eternity. There’s also a spinning wheel of fire as well as one of the last images is again of a spinning wheel, with a baby attached to it. Enma, King of Hell (Kanjûrô Arashi in an uncredited role) states as a punishment for the worst offenders if they call out during their punishment is to start it all over again at the beginning of Hell which again feels like the spiral motif.

I bring all that up as this feels important. In the Buddhist religion, a big part is reincarnation. This is being reborn when you’re given the chance to fix past transgressions and get closer to complete enlightenment. That seems like a circular pattern of life. If the good is, I would assume the bad would be as well. The baby being attached I take as meaning that, no matter what we do, we are stuck to our fate. It is interesting a character is going for the baby to change things.

Since I’ve dropped the word, let me delve more into the feel and look of the movie. This runs 101 minutes or so. It really deserves it for me. There was this undercurrent that just made me feel uncomfortable. This is in part to the soundtrack of the movie. There is a lot of singing that mirror events we see, going to see or have seen. The others really are just there for the vibe. We also get screams of the damned, which are unnerving. The Hell sequences are uncomfortable. I love the take on the punishment and what the sinners have to experience for the worldly pleasures they went after. I like following our character through them as well. Not everything we see looks great, but coming out in 1960, they went practical. I’m quite forgiving and there were things that made me cringe which works. The cinematography was amazing as well.

All that is left to cover would be the acting. I really like Amachi as our lead. I feel bad for him, as he doesn’t seem to know what he wants and is pulled by those around him. Tamura peer pressures him and ruins things which he just takes. The growth of Shirô is good for what the movie needs. Mitsuya is interesting as for the most part, she is a supporting character. I give her credit though as she is playing two different roles. They aren’t that different, but regardless, it works as you see it play out. Probably the best performance though is Numata. He is such a villain and I like what happens with his character as things go on. The rest are good for what was needed in rounding this movie out.

I had a feeling this review would go longer as there is a lot to unwrap here. Despite all that I put down, I still only feel like I’m scratching the surface. This movie is really exploring some interesting topics and ones that I really want to delve more into now that I’ve started. The acting really helps to follow this story. The arthouse aspects might not be for everyone, but I really liked the visuals of things that we got. Soundtrack really helps to build the creepy vibe they’re going for as well. I will warn you, this movie is from 1960 and from Japan, so I watched it with subtitles on. If that is an issue, I would avoid this. Regardless though, not everyone will enjoy this, but the movie really is interesting and I rate this as good movie. This will be one I will revisit and I could see it going higher with more viewings for sure.