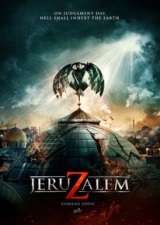 This film begins telling us that there is a bible verse that states that there are three gates to hell. One of them is in the desert, another in the ocean and the final one is in Jerusalem. We then see a priest, talking to a camera as they come up on a woman who is on her knees. She is chained up and there is something wrong with her.

We then shift to a young woman who is about to go on a trip to Tel Aviv, Israel. She is played by Danielle Jadelyn. Her father has purchased her glasses that have cameras in them. It connects to the internet so it recognizes a face and pulls a social media account. It can also take pictures, navigate and play music, much like our smart phones. She goes into the basement were see looks at a picture of her brother. He passed away, but Jadelyn was close to him.

They go to meet her friend that is coming along on this as well. She is played by Yael Grobglas. There is a guy there that Jadelyn thought was no longer in the picture. The two of them go to the airport and catch their flight. On their flight they meet a guy, who is played by Yon Tumarkin. He travels a lot and Jadelyn takes an interest in him.

When they land, he asks them to come to Jerusalem with him. Jadelyn wants to while Grobglas doesn’t at first. She is convinced to come when she knows that her friend doesn’t really cut loose. They arrive in the city and find the hostel that they will be staying at there. It is run by Tom Graziani and the hostel is run by his father. Graziani takes a liking to Grobglas and offers to show them around.

The group smokes marijuana together, drinks and goes out. Grobglas is very flirty and Jadelyn hits it off with Tumarkin. That sours though when they go into the bathroom to fool around and he is wearing her glasses. He finds pictures of her with her brother and mocks him, upsetting Jadelyn. She leaves the bar and she becomes lost. Her navigation isn’t working and finds a strange person in an alley. She is spooked, but Tumarkin shows up. He leads her back and they end up making love.

On the next day they go to see some of the sites around Jerusalem. They go down into some caves and Tumarkin doesn’t feel well. He leaves and Jadelyn goes with him. They all end up meeting back at the hostel. As they are getting ready for the night, some weird things begin to happen. Tumarkin shows up, saying they have to leave and he is taken away. There are then some planes that fly overhead and drop bombs. Everyone is in a panic and need to find a way out before the city is sealed.

What are these creatures that we keeping getting a glimpse of as they are trying to flee? What about the giant thing that is seen with quick looks of? Can they get out before they are locked in?

I have to say that this film does do some good things. It had a feel of a Lucio Fulci film in that we have multiple gates to hell. One of them these people come in contact with. There are creatures, which I guess we are to assume are demons. Most of the time we just get quick glimpses of them, which I find to be a good way to handle them. I personally would have liked that explained a bit more. I also like the idea of this being found-footage and it is being recorded with her glasses, so that explains why it is constantly being filmed. A big issue I had with this film was that we don’t get any of the creatures until almost the last 40 minutes or so. Almost half of the movie is just setting it up and I wasn’t a fan. There is also a twist that I saw coming from the beginning and which I wasn’t big on either.

The acting wasn’t bad though. When it is found-footage, I am a little bit more lenient, since I am fine with them acting amateurish. I thought that Jadelyn was going to be played as nerdy, but that is definitely not the case. She is reserved due to the trauma of her brother’s death. We do see her nude which wasn’t bad. She is wearing the glasses the rest of the time so we don’t see much of her. Grobglas was beautiful and I thought she played the wild friend well. Tumarkin wasn’t bad, but his character had a little back-story, but it doesn’t explain him enough. Grazini also really never builds much in the way of character. The rest of the support wasn’t bad.

The first thing I will touch on for this is the effects. I liked the use of the found-footage. Most of the monsters are CGI from a far. For the most part they look good. The giant one I wasn’t a big fan of though. We only seem to get glimpses which definitely help. When they are up-close it looked to be practical effects which was a great choice and looked good as well. The film was boring to me though. It took too long to build the plot and I think the editing had a lot to do with that. This film doesn’t have much in the way of score as it is all noise around them. There are a couple scenes when the glasses play music or when they are the bar, but that doesn’t add much to the film.

Now with that said, this film was below average for me. It had some good things going for it. The concept of the film wasn’t bad, but needed more explaining. I didn’t mind the angle of the found-footage and how it was used. I liked the ending. I didn’t care for the reveal as it was predictable. I also thought the acting was decent as well as the effects for the film. It does come off as boring as it takes too long to get to the creatures. I think editing is partly to blame. This film could have been much better; it just missed the mark on quite a few things. I wouldn’t recommend viewing this one.