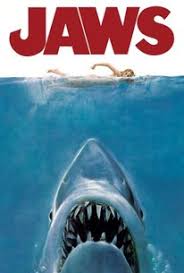 This was a film that I wasn’t sure if I had ever actually watched all the way through or, but I had seen most of it multiple times. It definitely is a blockbuster film and one that really changed the landscape of cinema. I can say now, that I’ve seen it all the way through twice, both on 35 mm thanks to Gateway Film Center, plus another viewing at the drive-in due to COVID-19 and theaters not being open currently. The official synopsis is a local sheriff, a marine biologist and an old seafarer team up to hunt down a great white shark wrecking havoc in a beach resort.

To start off, this film definitely has interesting dynamics for me. This is a summer on an island where they make most of their money for the year off of the people that come there for vacation. This makes it a lot like those crab fishers or other professions that have a small window where they make a majority of their money. When there is the fear that a shark might be stalking the waters around it, it is a big deal. Quint (Robert Shaw) puts it best, if they don’t make their money they will have to go on welfare and they are proud town. This makes for an interesting dynamic in that Chief Martin Brody (Roy Scheider) is an outsider who is the chief of police. He has the best intentions, but he is talked out of it by the mayor, Larry Vaughn (Murray Hamilton). His wife, Ellen (Lorraine Gary), points this out from the beginning as well. It really makes for an interesting though when the mayor and city counsel want the beaches open and are constantly trying to convince those around them that this isn’t what they think is happening.

I did find the shark aspects of the film to be really good as well. We don’t get to see it much, which this was due to the mechanical sharks used kept breaking down. I personally think this actually helps to build the suspense of the film. Which also is interesting though is that we get a young woman who is killed in the opening sequence and more deaths happen soon after. There is a long stretch in the middle where the interactions with the shark taper off, but the film never really drug during that part for me. Personally, I feel this helps to build the tension of wondering if the men will be able to kill this animal gone rogue. On top of that, once they’re out on the water, they try a few different ways to kill it and they fail. It is just showing that nature is pretty awesome to be honest. I felt that the editing helps to build this tension to the satisfying climax.

Something else that not everyone is a fan of is the time Brody, Quint and Matt Hooper (Richard Dreyfuss) are on the boat. I personally love this part as Quint is my favorite character in the film. I think the story he tells about his time in World War II is interesting and it explains a lot about his character. He comes off so hard and this really humanizing and explaining his vendetta against these animals. What he says about the sharks he encountered during his time over there is quite haunting and I actually think it sets up their final showdown.

From there we should go to the acting. I thought Schneider was really good in his role. I find it interesting is that he is the chief of police. He doesn’t like water, but lives on an island. He is from New York City, where he was also a police officer and he had to be tough there. He is such a pushover when it comes to his authority here and how he is bullied into going against what he wants to do. Shaw as I stated above was my favorite character in this film. I feel that the reveals we get about this character make him some a tragic person. Dreyfuss is good as the educated character that is an outsider. Quint nor the counsel buy into what he is saying. Gary is good as the counterbalance to Schneider and has a couple funny moments. I also really like Hamilton. He makes you sick with what he does to override Schneider, but it is really hard to fault him too much. I thought the rest of the cast round out the film well.

The effects of the film were something that really were a point of contention with director Steven Spielberg, but I actually think it ends up working out for the film and helping it to be more suspenseful. The times we get to see the sharks, I know it isn’t real, but I think it actually looks much better than many films that use CGI sharks. Sharks that you see on television or in aquariums do seem to act very similar to the one in this film and I thought it was good. The blood and chum in the film also look good, I had no complaints there. It is also shot beautifully.

Something that might not be a popular opinion is that I’m not the biggest fan of this soundtrack. Now I love the main theme for the shark. I think that helps to build tension and the scenes that are shot from below the water that use this theme, I think are great. There are a few times in the film where the music was a little bit upbeat and didn’t fit for me personally. Now I’m not going to take off any points here as I feel this is a minute quibble with it.

Now with that said, if you haven’t seen this film I would highly recommend it. The realism of what happens in this film is great, as it is loosely based off an incident that happened off the coast of New Jersey, which is also referenced here. I found the story of this film to have some interesting dynamics and interactions with the characters. I thought the pacing of the film was good. It builds tension all the way through to the satisfying climax. The acting I felt was superb. The effects seem to have benefited by the machines not working as they wanted as I think it helps with the tension and suspense. I’m not a huge fan of the soundtrack, but I think some parts of it are great where others don’t necessarily fit. I still think that this film is definitely worth viewing and is great.