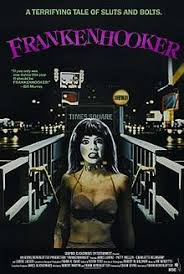 This was a film I’ve known about for awhile, but never actually saw before. The director and co-writer of the film, Frank Henenlotter, is one that I’ve seen some of his other films, so I came in knowing this one was probably going to be outrageous. The synopsis is a medical student sets out to recreate his decapitated fiancée by building her a new body made of Manhattan street prostitutes.

We start this film out with Jeffrey (James Lorinz) as he is trying to get this weird brain with an eyeball inside of a tank to follow what he is saying. His fiancée’s mother Mrs. Shelley (Joanne Ritchie) asks him for the ketchup and to go out to the party. It is outside we meet his fiancée Elizabeth (Patty Mullen). They are at a party for her father as it is his birthday. Mrs. Shelley makes a comment to Elizabeth about not eating too many pretzels to watch her weight. It is funny as she isn’t fat and has a pretty good body, but the film is building up that she has to watch her figure and the outfit she is wearing is making look like there’s an issue. Things take a turn when the gift that Elizabeth and Jeffrey got Mr. Shelley (J.J. Clark) ends up killing Elizabeth.

This really tears up Jeffrey and he is obsessing over an experiment to bring her back to life. There is a storm coming in a couple of days so he needs to get things ready to bring her back. The problem is that he only has her head. He decides to go to Manhattan to build Elizabeth a new body from the best parts of hookers. He is approached by Amber (Kimberly Taylor) who takes him Zorro (Joseph Gonzalez) a local pimp. They work out a deal for him to get the group of his best girls so Jeffrey can decide. He also buys crack from Zorro and makes up a super batch to kill them.

When it comes time, he changes his mind but the girls find the drugs me made. They use it with disastrous results to them. He does collect the parts and rebuilds Elizabeth. He uses the storm to bring her back. The problem is that isn’t herself and all of the personalities of all of the girls he used is all working in concurrence. She goes to do what the parts did before, tricking and heading for Manhattan. There’s something not quite right though when she comes in contact with her johns.

I do have to start this off stating that what I thought was correct, this film is pretty outrageous. I will admit though, I had a good time with it. Something I wasn’t really expecting was the bit of social commentary with it and there’s some pretty good writing here as well. The first thing that really got me was the references to Frankenstein actually used. Elizabeth’s last name is Shelley, taken from the writer of the original novel Mary Shelley. Something else is the way that Elizabeth walks when she made into Frankenhooker. It is very similar to the way that Boris Karloff walked in the original. Even the shoes she is wearing look similar to his in the Universal classic and the bolts that are on her neck later in the film. I’ll commend her more later, but Mullen did a great job in this.

I also was thrown off a bit by when Elizabeth first wakes up why she wasn’t herself. The head used was hers so I figured whatever was in the brain. The film does seem to be saying that the DNA of all the parts contributes to the thoughts of this and I actually was on board here. There is more great writing in all of the lines she is spewing were used later in the film and I thought that was solid.

The last thing for the story is the social commentary and the grittiness of New York City. I love films that are based there from the 80’s as it just gives a low budget with how gritty it is. The scenes there were great for me. There is talk of prostitution being legalized as well. It is kind of a sad thing that these women have to sell themselves to make ends meet, but there is the idea that they should be to do what they want as well. There is the aspect of the dangers of this as well. Going along this is Zorro is using crack to keep them inline and there is the news program stating that legalizing it would eliminate that part. I can see the logic there for sure.

As to the pacing of the film, I think it is good for what they were going for. We have Elizabeth dying in the first 10 minutes of the film and then we have Jeffrey pining over how to bring her back. I think it moves through the plot points at a steady pace, building tension as we go. There is the big thing of getting the right parts before the storm hits and then trying to find her when she leaves him. I did like how the film wraps up and to be honest, it is fitting fate for Jeffrey.

Something that I wasn’t expecting was the acting to be as good as it was. It’s not great by any stretch but for what the film is, I think it’s good. Lorinz is solid as the mad doctor. At first we see that he is a little bit disappointed in his life and then when his creation kills Elizabeth, he goes into depression. I think his look as being as pale as he is was good. He is also socially awkward which works as well. Mullen was great as well. I thought she was a bit Jersey girl to start and I liked her quirkiness. She had a great performance when she is trying to be all of the girls she is composed off. I also found her quite attractive as well. I want to shout out all of the ‘hookers’ in the film, they were good looking as well and we pretty much see all of them nude. The rest of the cast as rounded out the film for what was needed.

As to the effects of the film, I thought they were great. This film is a comedy; they are intentionally bad to go along with how outrageous this is. We can tell a lot of them are dummies, but I like that they went practical to do all of this. The exploding scenes especially. What I really loved though is when Elizabeth wakes up as the creation. She has different color ‘parts’ put together and I think that is genius. The film is also shot very well.

Now with that said, this film isn’t great by any stretch. Much like with any Henenlotter films, you have to know that it isn’t going to be realistic and that they’re going to be fun. This movie actually has some really good writing in my opinion. I like the taking of the classic tale and putting a different spin on it. The pacing of the film is good. The acting is solid. Some of the effects aren’t good, but that is what they were going for while some of them are really thought out. Soundtrack of the film really didn’t stand out to me, but it doesn’t hurt the film by any stretch. There is quite a bit of nudity in it, if that is something that interests you. Overall I’d say this film is pretty good and most definitely fun.