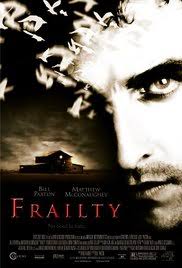 This was a film that I remember seeing the case in the Favorites section when I worked at Family Video and one of my favorite podcasters, Mr. Watson, talked very highly of this film. That was the reason I saw this movie the first time. I then showed it to Jaime as it fell in one of my years for The Podcast Under the Stairs Summer Challenge Series for the 2000s. The official synopsis is a man confesses to an FBI agent his family’s story of how his religious fanatic father’s visions led to a series of murders to destroy supposed ‘demons’.

As many of you know, stories of films are what I look for most and this film has an excellent one. This film combines a couple of my favorite elements together. The first is that we have a man who believes that angels and God have spoken to him. We never learn his real name, just that he goes by Dad (Bill Paxton). What I like about this is that for a majority of the film, we don’t know if he is really seeing the things that he claims or if there is some kind of mental illness. Going even farther though is that a majority of this film is told by his elder son, Fenton Meiks (Matt O’Leary). The young Fenton thinks his father is making it up and the people that are being brought to their home are normal and are being murdered. The younger son Adam (Jeremy Sumpter) believes that his father is telling the truth. I chalked most of this up to naivety from the look of his age.

Now if you know me personally, I do not follow organized religion. I don’t fault anyone who does, but personally I don’t agree with it. I do believe that some people with mental illness can use it like it is in the film. I’m not saying that is the only way to read this film, but definitely it is something that can be seen in real life. This film does present its story in a great way. It is being told by Matthew McConaughey to an FBI Agent, Wesley Doyle (Powers Boothe). He is trying to convince him that Adam is the Hand of God killer they are looking for. To build tension, Agent Doyle doesn’t believe him, but does allow him to tell his story. The deeper he gets into it, the more Agent Doyle considers it could be real. There’s also a great duality here where as a boy, Fenton brought the sheriff of their town to show him what his father was doing and in the present, this same offer is made.

This film has a great twist and reveal at the end in my opinion, which I did see the reveal coming around halfway through. Jaime did make a joke about it as well, but was shocked at how it played out from our discussion after the film. I was impressed with the story and how it unfolds overall. There is also some little thing during the ending that I liked as it really set the film apart in my eyes. It is a reference back to something earlier in the movie which I’m a sucker for. Something else people might not like it as it narrated with voice-over throughout most of it, so I should point that out here.

Going from this would be the editing of the film, which I thought was good. The film is presented with giving us some details on the killer and then we really get into the story when McConaughey comes in to speak to Agent Doyle. I like that to break it up we come back to the present. We also get to see McConaughey gauging to see if Doyle believes him or not. There’s a tension between the two.

For a film like this, the acting was very important. First I need to give credit to Paxton. He also directed this film. His role is great, because we establish he is just a normal guy. When he starts to talk of his plan, we immediately think he is crazy. We do get a scene of a vision he sees, then nothing. He plays this so well that he believes what he is seeing so it is hard to fault Adam for believing. McConaughey also does a great job in this film. Boothe was really good for what was needed from him. I also want to commend both O’Leary and Sumpter. They are children actors in this and I think they do a solid job, especially O’Leary. I was impressed overall.

For effects, there really aren’t used. The blood in the film was practical and looked good on the actors. There are a couple of visions that are shown, but they are done in a way that look surreal, but aren’t CGI. It works well though as we question if this is really happening or not. I had no issues here and thought that the effects were good for what they needed.

The soundtrack of the film was also something that was good. Now it isn’t one that is going to make one of my favorites list. It fit the scenes and helped to build the tension. It never took me out of the film, so it succeeds in my opinion for what was needed.

Now with that said, I would recommend this film if you’ve never seen it. I thought the story is so deep and has a couple different ways of reading it. Even at the ending it gives some additional things that I thought really set it apart there. It is edited very well also. It builds tension to the climax, which I thought was satisfying. The acting is right up there with the story as one of the strongest parts of this film. I mean this across the board. The effects looked real, but there weren’t a lot used. The soundtrack was also good for what they needed as well; it helps to build tension for the scenes. This film I thought was great and would recommend this to horror fans and to non-fans of the genre as well.