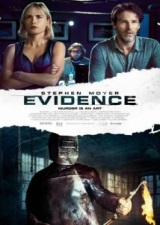 This film begins showing the scene of a crime. We see that they are collecting evidence. From there we go to a press conference outside of the police station. Radha Mitchell is the detective that gives the information to the press, but she does not give them much. In the crowd we see a man who looks rough, played by Stephen Moyer.

Inside the station Mitchell and Moyer come face-to-face. She tells him to go home because he is on leave. From what we learn, Moyer is the best at taking camera footage and fixing it. With a little convincing, she allows him to help. We learn that there was a fire at the scene and a lot of the footage is corrupted by it. They work with another computer analyst played by Barak Hardley as well as another cop played by Aml Ameen.

They begin to watch the footage and we meet some of the characters. Much of it is of an inspiring actress, played by Torrey DeVitto. She is auditioning for a play, which she gets. Her best friend is filming a documentary of her, hoping that she can sell it once DeVitto is famous, the director played by Caitlin Stasey. DeVitto is dating a guy, played by Nolan Gerard Funk, who is working to become a singer.

Stasey films the play that DeVitto stars in. At the end of it, when she comes out to take a bow, Funk sings her a song that ends with him proposing to her. She rejects him. DeVitto apologizes to him through a video and asks him to come on the trip to Las Vegas that they have already planned.

Stasey and DeVitto wait for the bus to arrive. Once it does, the driver gets off and tells them that they are running late, he is played by Harry Lennix. He does not like the fact that he is being recorded on the camera and Funk arrives. He does not seem thrilled to be going on the trip.

They pick up three other passengers. One is a dancer who is foreign played by Svetlana Metkina, another is a sixteen year old Albert Kuo and a woman who is not listed on the list of passengers, she is played by Dale Dickey. She becomes the first suspect and they begin to investigate her.

Lennix tells them that they are out in the middle of nowhere to pick up another passenger. They get into an accident and upon inspection; someone buried fencing that caused the bus to crash. Lennix tells them about the truck mechanic shop they passed and goes back to call for help. Everyone follows him.

Tension run somewhat high and when Kuo is found stabbed, they begin to panic. The survivors are hunted by someone wearing a wielders’ mask and carries a torch. As each one is picked off, Mitchell and Moyer try to figure out from the footage who committed the atrocities.

Can they figure it out before the killer strikes again? Is it someone on the bus or was someone there waiting for them? Footage begins to leak to the news and on the internet. Is the killer taunting them? Or is there someone leaking it on the police force?

I like ‘found footage’ films when they are done correctly. I have seen that a lot of people do not like it, especially when the footage is really shaky. I am not bothered by it and I feel it gives it a sense of realism. I think that is something you get with this one. I also like about this one is that they have a few different cameras and camera phones that have the footage on them. I like that Moyer is piecing this together and it progresses the film very well.

With that said, I loved the thriller aspect of this. I was left guessing and could not figure out who was behind it. What I like is the film gives you who the police think it is, but it is not obvious who it is. I was worried that it would be, but the twists and turns kept me wondering and I have to admit, I did not see the ending coming. That is what made me really enjoy this film.

I would recommend this film if you are a fan of ‘found footage’ film. I think this one has a good concept of a murder happening and there is footage of event. It is corrupted and needs some work, but a lot of it can be seen. The acting I think helps make it feel real and the realism of the footage adds to what we are watching. The only issue I had was the attempt at a back-story for Moyer that is not realized and really does not have much to do with the overall story. It does play into it, but not really much. I would say this is worth a viewing.