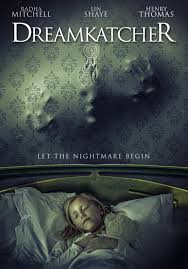 This was a film that when my girlfriend Jaime wanted to watch a movie and asked what I needed to see for the week, I did inform her I needed a 2020 film to keep on my pace as well as to have a featured review on Journey with a Cinephile: A Horror Movie Podcast for my Journey Through the Aughts segment. I made a list of possibilities and this is the one that she thought looked interesting. Aside from that, I knew who starred in it and came in blind. The synopsis is in order to stop his bad dreams; a young boy steals a dream catcher from a mysterious neighbor, forcing his family to rescue him from a nightmarish entity.

I will admit taht I’m not the biggest fan of this synopsis that was provided from the Internet Movie Database as I feel it is a bit misleading. We start this with Becky (Jules Wilcox) going for a run and her coming home. She keeps hearing whispering in the tall grass around her and hears something bumping in her house while she tries to take a bath. She ends up sitting down at her piano to record a song and we see a boy pop up behind her.

We then shift to a vehicle driving through the countryside. The driver is Luke (Henry Thomas) and his girlfriend is sitting next to him of Gail (Radha Mitchell). Becky was his former wife who has passed away and she was the mother of the boy in the backseat, Josh (Finlay Wojtak-Hissong). He’s not acclimating well to his father seeing Gail.

Josh is having nightmares as they try to stay in the cabin where his mother passed away. The story he was told was that she drowned in the nearby pond. Gail is a child psychologist and is analyzing his dreams, thinking they’re a good thing. Luke isn’t so sure. It all takes a turn when he is forced to go back into the city for work, leaving her with Josh.

Things don’t go so hot. He is kind of rude to her in the things he says, but she is trying her hardest to befriend him. Josh plays a pretty mean joke with a well in the woods and he runs off, discovering a shop belonging to Ruth (Lin Shaye). She used to sell dream catchers and other similar items, but Gail thinks it is just a way for people to cope without actually dealing with their problems. This is a bit culturally inconsiderate the more I think about it as well.

As things seem to be getting better between Gail and Josh, he sneaks off one morning to Ruth’s. Gail goes looking for him and once she finds him, she has him wait outside while the two women talk. He takes this time to sneak off into the barn where he finds a hidden dream catcher. He steals it and starts to sleep better at night. Josh has vivid dreams of his mother and we start to learn the truth of what happened to Becky, Ruth’s grandson Noah (Duncan Foster-Allen) and the dreamkatcher that Josh took.

There’s where I want to leave the recap. To start my thoughts, I did leave out that the movie begins giving us a dictionary definition of what a dream catcher is and what a dreamkatcher is. Jaime did have me look up the latter and there isn’t actually anything out there, so it is something made up for the movie, which I’m fine with. It is supposed to be an asymmetric with black strings that holds evil and the origins are unknown. You normally have me on board if you’re trying to create your own lore if you handle it properly. This aspect I would agree is.

We have an interesting dynamic here that felt very similar to that of one of my favorite movies of the year in The Lodge. We have Becky who in this case didn’t kill herself, but did die. Luke brings his son Josh to the middle of nowhere with his new girlfriend who the child doesn’t particularly like and then leaving them alone together. It isn’t established, but it feels like this movie is trying to tell us that Gail was Josh’s doctor and that is how she met Luke. Since it isn’t established, I cannot confirm and I will also digress. Josh and Gail do start to get along quite well and there’s a possible of a supernatural take on what ends up happening as things progress.

What becomes my problem with this movie is that it is boring. For a movie that is running 85 minutes, it takes too long to get us where we are going and it doesn’t do enough to hook me back in. I think in part of that though, there are other movies there are out currently doing what this one is better. This is coupled with decisions made by characters that don’t really make sense to me in the climax. Along with that, the ending I didn’t work either unfortunately. This really did feel like a combination of The Lodge and The Wretched to me. The specific parts of each other work better than what we get here.

To shift this over the acting, I thought it was a bit hit or miss for me to be honest. I thought Mitchell was fine as the lead here. She seems like a psychologist who cannot shut it off and it rubs Ruth the wrong way. It also causes a rift between her and Luke. I will admit, does build some tension. Thomas and Shaye do kind of feel like they’re just kind of collecting a paycheck. I wasn’t overly impressed with either. Wilcox is solid in the haunting way she needed to be and I commend Joseph Bishara for the limited role as well. The rest of the cast was fine for what was needed.

Really the last thing that I wanted to go over here would be the effects of the movie. I thought for the most part they were fine. From what I remember, they did go practical on quite a bit which I’m always down with. There are some things done with the nightmare aspects of the film with Becky that were fine. The look of the Night Hag was enhanced with CGI and I didn’t really have any issues there. A real problem I had though was this movie is based around dreams that Josh is having. It just doesn’t keep me interested when I know that what we’re seeing isn’t real and there are movies before this that do it much better. I will say that the cinematography is pretty solid aside from my issues.

Now with that said, this movie really does have an interesting concept. There is one section of dialogue addressing ‘Cancel Culture’ which I did appreciate. The rest of the movie though is just very vanilla. It doesn’t go far enough to really hook me and the movie is just boring overall if I’m going to be perfectly honest. I think the acting is very up and down, the effects are well done for the most part, but it just relies too much on dream sequences. The soundtrack didn’t really stand out. It doesn’t really hurt the movie either if I’m going to be honest. Overall I’d say that this is just an average movie to me. I can’t really recommend it if I’m going to be honest.