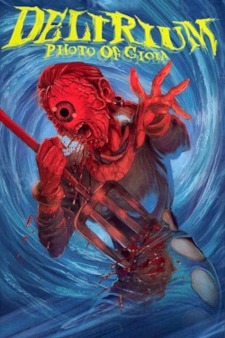 This is a movie that I never heard of until thanks to podcasts. It popped up for me to watch as part of my New Year, New Movie segment on my podcast Journey with a Cinephile: A Horror Movie Podcast. I didn’t realize until looking into it that it was directed by Lamberto Bava and featured Daria Nicolodi and George Eastman. The synopsis here is a former hooker runs a successful men’s magazine. An obsessed admirer systemically slaughters her models and supplies the mistress with pictures of their disfigured corpses taken in front of her semi-nude posters visible in the background. Will she be the psycho’s next victim?

That recap is long, but I think it does well to give us what this movie is about. We start by a swimming pool. Kim (Trine Michelsen) is modeling with two others. The photographer is Roberto (David Brandon) and his assistant is Tony (Vanni Corbellini). Tony is the younger brother of Gloria (Serena Grandi), who is from the synopsis as the woman who runs the magazine. She is in charge here and she works with Evelyn (Nicolodi). This shoot is recreating one of her most famous ones and they’re using this to reinvent their magazine. Gloria inherited it when her husband passed away in a car accident. Also, we get to meet Mark (Karl Zinny). He’s wheelchair bound and in love with Gloria. He makes obscene phone calls to her.

As things wind down that night, Kim is attacked trying to leave. The person sees her with having a large eyeball for a face. She is killed with a pitchfork. Mark sees what happened and calls Gloria to tell her. She thinks that he is messing with her though. She soon realizes that is not the case when she receives a picture of the murdered model like the synopsis stated.

Gloria must figure out who is behind it before it is too late. There are quite a few suspects like Flora (Capucine) who wants to buy the magazine and she has a history with. There is an old flame that Gloria rekindles with of Alex (Eastman). It could also be those that Gloria works with or even Mark, as we learn about his history and the cause of his physical ailment.

That is where I’m going to leave my recap for this movie. Now I should point out that this is a giallo, so we are getting a murder mystery. I like that the movie doesn’t take long to get into this one either. We establish a good portion of our cast and then we get that first murder. What I like from there is that we learn characters’ backstories which contributes to making us wonder who is involved with the murders and who is a red herring. I thought that worked well, especially because it had me guessing until the end. I did guess who the killer was early on, but it had me second guessing it. I thought that I was wrong for a decent stretch.

Where I want to shift over to is looking for a bit more into the premise. Gialli tend to use sexual perversion in their movies and that is something we get here. We are dealing in the world of modeling, which can be cutthroat. The title of the movie also plays into the premise. Our killer sees Kim as having an eyeball head. Another one has the head of an insect before she is killed. I didn’t fully understand this until I looked up the name of the title. Illusions and hallucinating are some things that comes with delirium. What I do have an issue with here though is that they abandoned this idea. It also doesn’t go anywhere aside from showing us that our killer is crazy.

Then the last thing for the story that I want to delve into is that we have some characters that I don’t think need to be here. Some are legitimately just introduced to be red herrings. This is something that I’m not going to delve into as it could give away spoilers for who the killer is. What I will say though is that Roberto as the photographer has a motive since as the deaths pile up, Gloria considers selling the magazine. Evelyn seems to keep getting the pictures of the staged deaths. Mark’s past is more intertwined with Gloria than either knows. There is also Flora who wants Gloria to sell the magazine. Gloria has a past so there are quite a few people that could be the killer and have a reason.

Moving from that, I’ll take this over to the acting. Grandi is good as our lead. I like that she does some logical things. As deaths happen, she wants to sell the magazine in hopes that they’ll stop. I didn’t realize until reading the back of my Blu-ray that she was considered the Dolly Parton of Italy. She is quite attractive and we see her nude as well. I was happy to see Nicolodi here, even though she doesn’t have a big part. Corbellini, Brandon and Zinny are all good. I think the victims were good. I liked to see Eastman in his role. Something I haven’t brought up that is in gialli is bumbling cops. We get Inspector Corsi (Lino Salemme), but he is doing good police work. The problem is that he doesn’t have a lot to go on. I thought his performance was solid as well.

This will bring me to the effects, cinematography and the soundtrack. For the former, I think they look good here. The blood we get was solid. There are some interesting deaths that we get early on. I am bummed they went away from this as the movie goes on, but that’s not a problem. How this is shot was good as well. I think we get good cinematography. There is a bit of lighting here that we know about in this sub-genre. We get a couple times of a red light that I enjoyed seeing. The soundtrack would be the last bit here and I thought it worked for what the movie needed. It feels very 80’s and I can appreciate that.

So then in conclusion here, this is a solid late giallo movie from Bava. Taking place in the world of modeling is fitting. The mystery worked, keeping me guessing to the end. I do think there are some characters that could be cut though as they don’t add a lot aside from being red herrings. The acting though is good. The effects were as well. There is good cinematography and the soundtrack fit for what the movie needed as well. Overall, I’d say this is a good movie. It is one that I’m excited to revisit now that I’ve seen it.