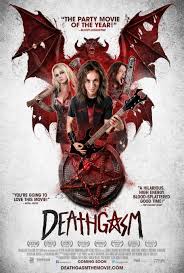 This was a film that I heard about when I first got into listening into horror movie podcasts. I added it to a list of films to see and when the Podcast Under the Stairs picked it as their Movie Club for February of 2019, I was excited to finally check it out. I’m now giving it a second viewing as this was part of the Summer Series on the same podcast. The official synopsis is two teenage boys unwittingly summon an ancient evil entity known as The Blind One by delving into black magic while trying to escape their mundane lives.

We kick off this film getting to know the characters. Our star is Brodie (Milo Cawthrone). He is forced to live with his Uncle Albert (Colin Moy), Aunt Mary (Jodie Rimmer) and his cousin David (Nick Hoskins-Smith) when is mother is arrested and sent to a mental hospital. They are normal, good Christian family, but this poses a problem as Brodie is a metal head. They immediately clash and this doesn’t help that David is a bully.

Life is a hard adjustment as he is the new guy at school and his only two friends are Dion (Sam Berkley) and Giles (Daniel Cresswell). They are nerds who play Dungeons and Dragons. Things do change when Brodie goes to a local record shop and meets another metal head, Zakk (James Blake). They two become fast friends and decide to start a band.

David’s girlfriend is Medina (Kimberly Crossman). She has lost interest in him, due to being a jerk and has taken interest in Brodie. The problem though is that he has low self-esteem and the bullying by David doesn’t help. She is still nice and tries to get to know him. He does give her a metal CD to introduce her into what he likes.

Zakk one day takes Brodie to a run down house and they break in. Rumor has it there is a metal legend that is hiding out there, the lead singer of a band known as Haxan’s Sword. They find him there, looking rough and clutching a record. They take it from him and he wakes up. A man pulls up and the singer gives them the record, telling them to keep it from the cult.

They find sheet music inside of it. There is a Latin title that Brodie later translate to summon the demon king and to obtain power and prosperity. He gets his band, Deathgasm, to play it. The problem is that it opens up the gates of hell and anyone in earshot is now possessed. Those they kill then become possessed as well. It is their job to close the gates before it is too late.

I want to lead off this review that I had a blast with this one. I do like some metal, but I’m far being a metal head. The references that are used from this group are great. They do a fantastic job of incorporating this and it is even great to see Medina, who are first doesn’t understand it, but doing what she can to try. I like that she is showing interest in what Brodie’s into to connect with him. It is quite interesting in that she is the gorgeous one. We normally see this the other way around. We do get some great ‘metal fantasies’ to show what it feels like to be into this type of music like they are.

Something that I really was struck by was how much this film felt like The Evil Dead. We have people being possessed by demons and there’s a chainsaw in this film too. This film is also a comedy, which the first film didn’t intentionally have but films later in the series went to. Another reference I liked was to the band Haxan’s Sword. Now I am looking into the history of horror and know that the film Häxan was a dark, silent era film that was taken from an inquisitor’s book. It actually tells the history of possession and demons throughout history, which I give the film props for doing its homework.

Not everything is a positive though. I don’t think all of the comedy landed, but quite a bit did. I was literally laughing out loud by myself, which I will give any film credit if you can get me to do. After a second viewing, it didn’t have the same impact. I still enjoyed the comedy the movie was doing.

The film actually carries some deeper underlying messages that I was onboard for. We have the issue of bullying in school. I like that they made the hot girl standing up to her boyfriend, who thinks it is a fun thing to do. I felt for Brodie, even though I was never bullied myself to this extent. The helplessness he experiences was sad and that he turned to black magic to try to fix it. Zakk doesn’t help the situation, but he also seems to have some deep underlying issues that seem to stem from his home life. For being a fun horror comedy, it does have some deeper aspects to it that I really dug.

Pacing for this film is good as well. Part of that is the 86 minute run time and we don’t get a lot of filler. It keeps the film moving at a good pace. The characters are introduced well, it doesn’t take too long to get to the real horror aspects of the film and we also get some good interactions between the humans and those that are possessed. I thought the ending was good and fitting for what the film was going for as well. Much like Evil Dead, I do think there are some inconsistencies with the possession.

There was an aspect of this cult that I thought wasn’t fully explored. I do like the idea of this and wouldn’t be surprised if there are groups out there like this. They are shown fairly early on and then disappear for long stretches. I do think they could have added a bit more for them and it wouldn’t make the film that much longer. Just something I noticed and could have used more of.

This brings me to acting for the film. I thought that Cawthrone was solid as the lead. He portrays someone who is down on himself and those around him aren’t helping. His growth was good into the hero as well. I like that Crossman is also solid and wants to be there for him. She is gorgeous as well and her acting was good. Blake was solid as a secret jerk in the film. He pissed me off, so I have to give credit to him for that, he sparked a reaction from me. I do like the redemption of his character at the end, as it does show some growth. The rest of the cast I thought rounded out the film for what was needed as well.

Effects for the film were solid as well. I thought all of the practical effects looked great. There is quite a bit of blood and gore, which a film like this definitely benefits from. I love the creativity they used with weapons in this film and the ones they combine together. There is even a dildo fight in the film against of the demons which was hilarious. The look of the demons was solid. I did have issues with most of the CGI effects though. They don’t look great and I’m glad they didn’t use too much there. I didn’t even mind the effects when introducing characters though, I know some will have problems there. The film is shot beautifully as well.

This then brings me to the soundtrack. As I said, I’m not a huge metal fan, but I don’t mind it. I thought the score for the film was perfect for what they were going for. I do think metal has its place in horror and this film definitely uses it to the fullest in that aspect. It fit for what they were going for and during some of the more action packed scenes, it really got me going.

Now with that said, this film was a big surprise for me how much I liked it. I came in knowing as little as I could and had a lot of fun. This isn’t a new concept, but they did put their own twist on it, which I like. I thought the underlying issues that are explored are good and still relevant today. The acting was good in my opinion, as were the practical effects and the score. The CGI I wasn’t a fan of. The pacing is really good as well. There were some minor issues that I had with the film, but had a lot of fun this first time around. It didn’t hold up as well for me, but I still found this to be a good movie.