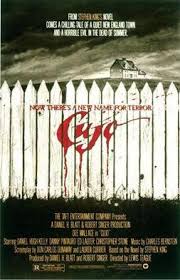 This was a movie that I remember watching for the first time I believe with my mother and sister. My dad might have been with us as well, but I know we rented it from the local video store and this would have been around the time that I was spreading out as a horror fan and my first steps were to see all of the Stephen King adaptations as I was reading all of his books as well. This one bothered me as a kid, just due to the realism of what we’re seeing. It had been some time since that last viewing so I was curious as to how this was going to hold up for me. The synopsis being Cujo, a friendly St. Bernard, contracts rabies and conducts a reign of terror on a small American town.

We start this off seeing a dog chase after a rabbit. This is of course Cujo. He chases it until it goes into a small opening of a cave. Inside, he barks which wakes up some bats with one of them biting it on its nose. It flees back home.

The family that we really follow is Donna Trenton (Dee Wallace) as she is preparing breakfast for her son Tad (Danny Pintauro) and husband, Vic (Daniel Hugh Kelly). He’s in marketing and his major account is for a cereal company. There’s then a scene with Steve Kemp (Christopher Stone), the local handyman, bringing back a wooden horse that has been stripped. Donna seems to ignore him though. We then learn that the reason is that Donna and Steve are having an affair. What makes it worse is that Vic plays tennis and is semi-friendly with him as well.

At home, Tad at night is afraid of a monster in his closet. His father tries to convince him there’s nothing there, but he won’t hear anything of it. Vic then has to come up with words to recite before bed to ensure that his son feels comfortable enough.

Vic is having trouble with his car and tries to take it to the local mechanic. The man is quite busy and the local mailman advises him there’s someone else named Joe Camber (Ed Lauter) who can help him and won’t rob him blind to do it. Vic takes the family out there and meets Joe. He agrees to help while Donna briefly meets his wife Charity (Kaiulani Lee) and son Brett (Billy Jayne). Tad is terrified when Cujo walks up, but Brett shows him that he’s friendly.

Cujo is getting sicker and sicker from that bite. Loud sounds start to bother him and he tries to get away. Charity ends up winning the lottery and buys something for Joe. He isn’t appreciative and in return, she asks to take Brett to visit her sister. There’s something uneasy about this interaction, but he agrees. Joe and his friend Gary Pervier (Mills Watson) plan something while Joe’s family is gone. The problem though is that Cujo has gone full rabid and attacks.

Donna’s car pretty much goes out and Vic has to leave town with a crisis on his account at work. He tells her to take it out to Joe’s. When she does, it becomes a nightmare when the car dies and there’s this large dog waiting.

To get back to my experience with this movie, I think I saw it before I got around to reading this book. It was intriguing as this movie does a pretty good job at incorporating a lot from the source into this movie. It has been some time since I last read it and really the only thing I remember are the endings being different. I know King has went on to say that he prefers the ending here, where now that I’m older and can understand things a bit better, I think he might be right how things play out.

Something else I brought up was that why this was scary to me. I think there are some slight liberties taken, but not many. This really is based in reality and just a perfect storm of bad things that are happening. Donna and Vic are at ends, plus he’s stressed and has to leave town for work. Steve and her are also at ends as well. Joe’s family is out of town and we get to see things play out with him. It is terrifying that no one knows Donna and Tad are there. It is the summer so they’re stuck in this hot car that won’t start with this massive animal just patrolling its area. A dog this big going rabid is unnerving with no one around to help.

Really the only issues I have with the story are some of the things that play with Tad. Jaime and I watched this so when he starts to have seizures, I asked if this was possible. She didn’t think so unless he has a history of them which isn’t established. He’s really just experiencing dehydration due to having very little water and being trapped in a hot car. I think the concept is genius though, as cars amplify heat with their set up.

As for the pacing, I really don’t have any issues. I think it is strategic that the first half is getting to know all of the players in this story, including Cujo. I like that we get to see this poor animal sinking into madness from this bite that went unattended. Then the second half of the movie is really seeing Donna trying to work out a way to get away from this dog and get to safety. I like that we see some of her plans failing, as it isn’t too convenient. The animal might be a bit too powerful, but I’m willing to overlook that. Where they leave the ending works, as the book gives us more of an epilogue that from my memory is problematic, so leaving this one where it does was fine with me.

Taking this to the acting, I thought it was pretty strong. Wallace is a veteran actress and I love that she’s been in a few iconic horror movies for me. I thought she does great here as the mother trying to protect her son. I do hate her though for cheating on her husband, but I like that we get flawed characters here. Pinatauro was fine as this boy in his first feature role. He was pretty cute at the time and he is also annoying, so I do find that to be realistic. I feel bad for Kelly. Donna confirms that he’s a good husband, but it seems like she wants more. He seems slightly broken as his life falls apart, so his performance fit. Stone is a jerk and isn’t necessarily needed in the movie. I thought he was fine though. Lauter is a jerk and it just feels natural. I thought the rest of the cast rounded this out for what was needed. Props to all of the dogs that were used as they brought realism that made me feel bad for what was happening into the descent into madness.

Last thing to go over would be the effects of the movie. They went practical which works best in my eyes. Jaime noticed it first that during an attack scene, the dog used was wagging its tail and it made me smile. The dog was enjoying what it was doing in working with the stunt person. I had no issues with the look. They hide the attacks themselves, just showing us the aftermaths if they do. I think that is a good route to go. Seeing how dirty Cujo looks good as well. I thought the cinematography was good in framing what they did.

Now with that said, this film I have a lot of nostalgia for having seen it early into my branching out days into more horror films. I think they really embody the feel of the King novel here for sure. It is a terrifying idea that could really happen if all of the factors line up right like we get here. The look of the dog is great and I think they frame things well to help there. I thought all of the performances were fine. I don’t necessarily know if we need some of the back-story of the characters though, as it doesn’t necessarily add too much, but I digress. I think this is a good movie in my opinion. I would also recommend this to horror and non-horror fans alike. It is a creepy story, but they hide most of the blood and gore. It is just a good story with a basis in realism. I will warn you though, this is from the 1980’s, so if you don’t like older films then avoid this as it isn’t the most exciting to audiences today.