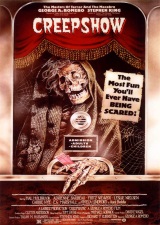 This film I have a lot of history with. Growing up I always felt like it was on the movie channels and I would put it on regularly, no matter at what point in it the movie was. It was then that my sister actually bought the DVD that I remember sitting down and watching it all the way through in one sitting. Being this was directed by one of my favorite directors, George A. Romero, and written by my favorite writers, Stephen King, that didn’t hurt me watching as much as I did either. I have had the chance to see this at the Gateway Film Center as part of its Horror 101 series and have given it another viewing for prep on a podcast. The synopsis is an anthology of stories that pay homage to the EC Comics of the 1950s.

We begin with a young boy Billy (King’s son Joe Hill) arguing with his father, Stan (Tom Atkins). He is upset with him for reading horror comics as he thinks they are garbage. Billy gets smart with him and Stan slaps him across the face. His mother (Iva Jean Saraceni) tries to calm the situation down. Stan takes the comic out to the garbage. A storm is coming and Billy looks out his window to the Creep. It then cuts to cartoon and then into a comic as we move to the first story.

The first story is titled Father’s Day. We have Sylvia Grantham (Carrie Nye) with her niece, Cass Blaine (Elizabeth Regan), her husband Hank (Ed Harris), and nephew Richard Grantham (Warner Shook). They’re rich and waiting for the matriarch of the family Aunt Bedelia (Viveca Lindfors). While they wait, we learn that Bedelia killed her father Nathan (Jon Lormer). He had Bedelia’s fiancé killed 7 years ago, at least that’s what she thinks happened. On father’s day is when she killed him so every year they meet at the house for this dinner. Bedelia shows up and sits at her father’s grave, but her father might not stay dead.

The next story is The Lonesome Death of Jordy Verrill. The title character of Jordy (King) watches a meteor crashes in his yard. He has dreams of selling it and paying off his debts. He burns his finger and uses water to cool it off. The meteor splits when he does this along with his dreams. When it splits, there is this blue liquid inside. He pours it on to the ground. The problem is everything that is touches starts to grow green plants and nothing seems to stop it. Even Jordy is growing. Can he stop it before it is too late?

The third story is Something to Tide You Over. This one starts with Harry Wentwroth (Ted Danson) being awakened by Richard Vickers (Leslie Nielson). We learn that Harry is seeing Richard’s wife. He is there for revenge and forces Harry to follow him out to the beach. At gunpoint, Richard buries himself in the sand. Richard produces a television and a VCR showing that his wife Becky (Gaylen Ross) is also buried like this further down the beach. The problem is that the high tide is coming. Can they hold their breath and survive? Or will they get their revenge?

The story after this is The Crate. This features a professor Henry Northrup (Hal Holbrook). His loud mouthed wife is Wilma (Adrienne Barbeau). Henry’s best friend is Dexter Stanley (Fritz Weaver). They are all at a party for faculty. We see that Henry is bullied by his wife and Dexter is interested in younger women. The two men are supposed to play chess later that night, but Dexter is called campus by a janitor, Mike (Don Keefer). He found an old crate from the 1800s underneath the stairs. They open it up to find a creature inside. It kills Mike and Dexter doesn’t know what to do. This does give Henry a plan to make this dreams come true.

The final story is They’re Creeping up on You. This one follows a rich man Upson Pratt (E.G. Marshall). He is in his apartment that is supposed to be clean. He wears white gloves and has a thing about germs. He has a cockroach infestation though and he’s irate. He tries to get the super on the phone, but he is on vacation. We also learn that a business he is buying, the former man in charge has killed himself. This guy’s wife calls and wishes he was dead, which we learn everyone seems to want as well. The cockroaches might give her just what she wishes for. Can he kill them or will they be too much for him?

The film is then wrapped around with Billy having something for his father that he’s sent away for.

As I’ve said about this film, I’ve caught it quite a few times, but not sure I’ve seen it start to end more than just a few times. That’s not to say it’s bad, it actually is an endorsement, because I can just pop in and enjoy it. This one has a really good wrap around as well, in that I love the comic book angle. I actually own one of the real ones that I picked up a couple years ago which was fun to read.

Going from there, I love the comic book feel, since it is playing on the EC comics from the past. They are the basis of a lot of Tales from the Crypt episodes, but they are usually tales of people doing bad things and getting what is coming to them. I actually don’t think there’s a bad one in the bunch if I’m honest. I think what I’ll do is break each of the segments down, but I think the pacing is good overall. It runs 2 hours, but it really doesn’t feel like it if I’m honest and probably one of the most complete anthology film I’ve ever seen.

Father’s Day in the past used to be my least favorite of the segments, but I’ve come around to it. It is interesting that we are given a horrible father in Nathan who deserves what he got, but the children aren’t really that likeable. It is fun to see a young Harris. The look of Nathan is really good and quite creepy. I did find it interesting that whiskey does what it does, because it is considered the elixir of life by some cultures in the world. This story doesn’t linger too long and I like how it ends.

The Lonesone Death of Jordy Verrill is now my least favorite of the stories, but that’s to say that I don’t like it. It was one of my favorites as a child and then fell off a bit an as adult. I can recognize that King isn’t a great actor, but he really does fit this character and I liked it. He is quite funny if I’m honest. This one is definitely more comedic and I don’t think it should be the second story, so that’s an issue. It is bleak though, which I’m normally down for as well. I think this should probably be moved into the middle.

Something to Tide you Over is quite freaky if I’m honest. I really like how villainous that Richard is and what he is doing to this cheating couple. The plan he comes up with is quite terrifying. The look of what Harry and Becky later in it are also really good. This one has a similar feel to Father’s Day though so that kind of is a slight issue. I do think a lot of these though are really revenge tales. It makes sense to not have these two back to back.

Probably my favorite of the shorts is normally The Crate. I can see where people think it is too long, which it is the longest of all of the ones here. This creature looks great and I love the nod to John Carpenter. I like the practical effects and what it does to those that get too close. I think Henry is an interesting character to take what Wilma does to him, but then finally finding a way to get his revenge. The ending of this also has some interesting implications as well.

The last segment is really good as well in They’re Creeping up on You. I’m terrified of cockroaches so I feel dirty just watching this one. Mr. Pratt is such a villain that I don’t feel bad what happens to him. It is interesting that he’s such a germophobe and that his apartment isn’t working out like he wants it too. It is wild that all of the cockroaches here were real as well. This one still makes me feel uncomfortable.

The last time I saw this, I wasn’t the biggest fan of the soundtrack. That is not the case anymore and it is interesting to see that John Harrison did it. He also did Day of the Dead, which I’m a big fan of. I’ve actually come around to the soundtrack here and think that it fits the scenes well. It also helps with building the atmosphere and the different things they need for it to do with the feel.

With that said though, I still really enjoy this anthology film. I’m a huge Romero and King fan, so seeing these two bring this to life is great. I do really like the EC comic style stories with the comic feel to mesh this all together. The wrap around is really good as well. I think that the acting is great across the board, even if some of it can be over the top. Effects are great, which I come to expect when I see Tom Savini’s name. Soundtrack also fits for what was needed and helps to build the atmosphere. There isn’t a bad segment here as I even like the one that I rate the lowest. If you’ve never seen this, even if you’re not a horror fan, I would recommend it as it definitely is a fun movie. I find this to be really good and one my favorite anthology horror film.