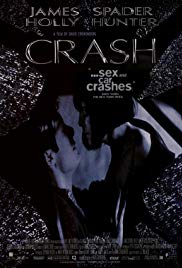 This is one of the David Cronenberg films I haven’t seen yet and that it came out after his heyday in horror. You don’t hear a lot about this one, but it was on my list of horror films to check out. Having seen it, it doesn’t necessarily classify as a horror film, but it is dark enough that I can see the reason to include it here. The synopsis is after getting into a serious car accident, a TV director discovers an underground sub-culture of scarred, omnisexual car-crash victims who use car accidents and the raw sexual energy they produce to try to rejuvenate his sex life with his wife.

We start with a woman in a hanger. She is Catherine Ballard (Deborah Kara Unger). A man is with her and he puts his hand up her skirt. The two of them make love. It then shifts to a set where it looks like they’re filming a car crash test footage. They’re looking for the director, but he’s no where to be found. We end up seeing that he’s the camera room with the cinematographer. He is James Ballard (James Spader). He’s married to Catherine, but we see later that they have kind of an open marriage where they tell each other about their sexual encounters while also making love to each other.

Things all change when James gets in a horrific car accident. He isn’t paying attention to the road and veers off into the other lane. He collides with Helen Remington (Holly Hunter) and her husband. The husband goes through the windshield into James’ car, killing him. She oddly flashes him one of her breasts while they’re sitting in the wreckage, waiting for help.

James has to recover in the hospital with a large brace on his left leg. Catherine visits him there and it turns out, Helen is there as well. The two of them meet in the hallway along with Vaughan (Elias Koteas). He used to do work at the hospital, but is now obsessed with car accidents. James and Helen spark up a fling that takes them to a performance Vaughan is putting on with two stunt drivers reenacting James Deen’s fatal accident. It actually ends in a real car accident.

The two of them descend into this group that also includes Gabrielle (Rosanna Arquette), who has some large scars from her own accident and she has to walk with a full body brace. James tries to pull Catherine into it as well, but it becomes darker the more the deeper they get into this interesting fetish.

Now coming into this, I expected more of writer/director David Cronenberg was known for, which was body horror. We do get some of that here. I normally hold off talking about effects, but I will cover that and get it out of the way. This film isn’t graphic in this department like The Fly or Videodrome. There are some interesting scars though on James, Gabrielle and Vaughan from previous accidents. They look quite real and painful if I’m honest. The film is also shot very well, including making these car accidents look realistic.

What caught me off-guard though was when I went to start this film and it asked me if I wanted the R rated or the NC-17 cut. I tend to enjoy the most graphic version of the film, so I watched the latter. The thing that I noticed early on is that James and Catherine are sexualized from the start. I don’t see an issue with their marriage set up if both parties agree. It is intriguing though that after James descends into the madness with this group, that we see it effecting Catherine. She’s interested at first. Once she gets a taste though, she’s not into it, but she seems to go along with what James wants which includes the ending. It does seem she both parties know there’s something wrong with their relationship.

This odd cult of people is into some really weird things. I’m not here to kink shame them by any stretch, but what I took from it is that their horrific car accidents made them feel alive. From then, they aren’t really into men or women, but just the pleasure. It is also interesting to see people interact with them who are ‘normal’. The highly sexualized nature intrigues them and definitely seduces. I took from it that the need to feel alive after they survived this trauma is what is driving them. It also drives them back to car accidents as well.

I’ll move next to the pacing of the film, which I thought was good. It doesn’t take long to get it into it and then when it did, I was interested in learning more about what was going on here. Seeing a couple like James and Catherine getting sucked into this was fitting, but despite their relationship, it is too much. It is a descent into madness of the sorts that’s shown differently for the two, but makes sense. I thought the ending was fitting for what we got here. This film really isn’t exciting per say. It really is more a character study of sorts.

What really carries this film is the acting. Spader I thought was really good, as he brings a sense of arrogance to the role. At first I didn’t like it, but we are shown his life and how it changes after the accident. Seeing the depravity that he needs was interesting to see play out. Hunter was solid as well. Her and James meeting is feeling a kinship from what they went through. The only thing would be to see her before the accident would have helped me to see if she was like James and Catherine or not. This actually might be Koteas best role I’ve seen him in. He is so crazy here that I thought it worked great for the movie. Shout outs to Unger and Arquette as well, they along with the rest of the cast. They rounded out the film for what was needed. We also get to see pretty much all of the women I named nude if that interests you.

Now with that said, this is an intriguing film for sure. It really feels like Cronenberg transitioning from his horror roots to the more arthouse films he does now. This is really a dark tale of desire and descending into depravity in the sense of what is accepted. Some could question if this is horror, I would say you would probably be right, but I can make a case for how this feels and what these people do could be considered that. It is paced in a way that intrigued me, but I wouldn’t say it is exciting. The ending was something that I really liked and worked for me. The acting is great across the board. There aren’t a lot in the way of effects, but the scars and car accidents do look quite real. The soundtrack of the film didn’t really stand out to me, but fit for what was needed. I will say that I don’t think this is a great film; it definitely explores some interesting things though. Can’t recommend this to everyone, but if you like more art films, I’d say give this a viewing.