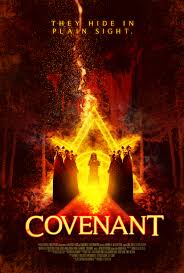 This was a film that I checked out for a couple of reasons. The first is that my goal for the year was to watch one hundred 2020 horror movie releases so I can give the most informed list at year end and for my podcast, Journey with a Cinephile: A Horror Movie Podcast, I like to review at least 1 release from the year as well. I came in blind, having seen two films with similar titles in the past. The synopsis here is after receiving word of his estranged mother’s untimely passing, a reluctant former army lieutenant must travel to a secluded town in the Pacific Northwest to unlock the mystery surrounding her suspicious death.

We start this film off back in 1984. We have Sarah (Paige Falardeau) and her husband is part of a ritual. She changes her mind about wanting to participant so she flees. A man pulls up and to help her. What he sees terrifies him so he drives off with Sarah. Back in the clearing, we see that the husband agrees with her and that an entity named Nefarion (Steve Kasan) arrives. He kills the man.

The movie then shifts to present day. Ian Parker (Nick Smyth) is returning to the town that he was born in. His mother has passed away and he needs to settle his affairs. Through a conversation on the phone, it is revealed that he is married and has child named Clay (Simon De Cicco). He messed up and the mother doesn’t want him to see his child, but Ian fights back that she cannot do this. They decide they’ll work something out.

Ian stops at a coffee shop where he has a weird interaction with the woman working the counter. As he tries to leave, he meets the Sheriff Malloy (Peter Valdron). They have a less than pleasant interaction and Ian isn’t the nicest person. Sheriff Malloy gives his condolences and asks Ian to hang around while they investigate his mother’s death as it had some mysterious circumstances.

He then heads up to the cabin where his mother lived. She left him a cassette tape that tells him why she did what she did and that there is a group of people after her. Ian doesn’t really buy into this and we get an odd scene where he stops to check the map. He notices a jogger girl, Jessica Chin King, who he had an odd interaction with at the coffee shop. She doesn’t answer him when he calls out followed by her scaring him. She disappears though, making Ian question if it really happened or the medication he’s taking making him hallucinate.

There are weird forces at play and things are happening around Ian. We see the specters of two little girls. Ian is supposed to meet with a Malcolm, but he’s no where to be found. Sheriff Malloy checks on him periodically. Ian’s world gets turned upside when he meets Jayde (Margaryta Soldatova) who was trained in Rome by the Pope and his guards to fight demons. She tells him what they have to do if they want to save his life as well as his son’s life. Ian isn’t buying it, but when they’re attacked, he has no other choice.

There’s where I’m going to leave my recap. As this movie was going on, I was thinking that at first it is pretty low budget, but I don’t like to just trash movies like that. The other thing is that I love films that involve cults, so that aspect was working in its favor for me. To be honest, this film really does go pretty in-depth with the mythology they created for the screenplay. I give a lot of credit there actually, as it felt like they cared what they were doing and really put the effort in to flesh things out. We have a group called The Six who are trying to bring about this demonic entity of Nefarion. There’s also something that is trying to derail them called The Temptress. That aspect of this really did intrigue me.

The problem that I run into with this movie is that it is kind of boring unfortunately. This is for a variety of reasons for me. Part of it is the fact that we’re following Ian and Jayde as they walk through the woods for most of it. They do interact with things, but it is widely inconsistent. One minute they say that if you do this, then this cannot happen, but then it does. They set up rules and do not follow them. These plot-holes take me out of it and I’m sure they’re using the setting as it was cheap. It just didn’t hold my interest. This becomes problematic as we have a short running time, which I like and the ending really worked for me as well. Another issue is what I’ll cover next, the acting.

Having time to reflect on this before writing, here’s what I’ve come up with. Smyth plays an insufferable character. I couldn’t stand him and couldn’t connect. I don’t think his performance was bad though, so this becomes problematic. With how it ends with his character, it makes sense. Since we’re following him though, I didn’t care what happened. Valdron was fine in his role. He didn’t really add much. Soldatova was quite attractive and I enjoyed seeing her. She was fine in her performance. I’d say that the rest of the cast was mediocre. It just feels like many people with very little experience without a strong enough script to help them.

That will take me to the effects of this movie. They rely mostly on CGI and I’m assuming this is budgetary reasons. The problem though is that a majority of it that was used was bad, so much so where it took me out of the movie as well. Not all of it was though, as at times it was used subtly with certain things for enhancement. We get Nefarion appearing places, magic being used, gunshots and their wounds. This all was bad looking if I’m going to be honest. With the gun flashes looking fake, I could tell that at least one of the guns wasn’t real as well. A bright spot with the practical effects was the look of Nefarion though. I will give credit there.

Now with that said, this movie was a bit of a let down for me as it hooked me with the initial concept. The problem though was just some inconsistencies with the rules that they’re trying to establish. Due to this, I lost interest and it is a shame with how this ends though. The soundtrack to the movie fit for what was needed, nothing special there. The acting really didn’t help much and the script isn’t really there to help them unfortunately. I’d have to say that this is just below average for me. A few tweaks here and there and it would have put it above the average line. With how it is though, it just wasn’t there.