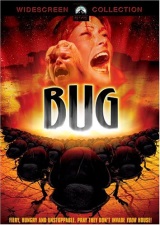 This film starts with a woman being dropped off at a church by her husband. The woman goes inside and she is played by Joanna Miles. Her husband is a local scientist and also teaches at the university, he is played by Bradford Dillman. Miles sits with a man that she has known for some time, he is played by Frederic Downs. An earthquake hits. They flee outside and Downs’ son shows up, telling them that the earthquake has ripped across their field.

They head toward it and Downs’ daughter is having a breakdown, thinking that he died at the church. She is played by Jamie Smith-Jackson and she is there with her brother, played by Jim Poyner. They see their truck coming, but before it reaches them, it overheats. It then blows up, killing the son and Downs.

Smith-Jackson is seeing Richard Gilliland, who is a student at the university. He comes across some weird cockroach like creatures that are in the field and by where the fault line is. He watches as they start a fire, burning him and killing a cat.

Gilliland seeks his former teacher, played by Dillman. He tries to tell him what these insects did, but Dillman doesn’t believe it. He changes that when he actually sees what they can do. He then takes a few specimens to get checked out. He works with his best friend and co-worker, played by Alan Fudge. Their wives are also best friends.

Dillman learns that these bugs have hitched a ride with him. He has found a way to get them into jars, but misses one of them. With Fudge, they also learn that these insects do not have eyes, are built for speed, but whatever reason, they barely move. They can start fires with a second set of antennas.

Dillman loses it when he wife is killed by one of these bugs and he decides to go into full blown researching them. His research takes a turn though he discovers they act differently when you can pressurize the air around them like it was deep underground. He also introduces a normal cockroach to see if he can get it to mate.

What will become of his research? What is the point of it? Will it solve anything or make things much worse?

This is another film that I hadn’t heard a lot about, but it was on a list of films to see. I have to say that the story had me hooked when Dillman goes off the deep-end and going all in on his research. I guess my problem with it though is that it doesn’t make sense. He figures out how to kill them, which is what I thought the original goal was. He also discovers that they will die off regardless due to the difference in pressure. You’d think that would be the end of it, almost even as a revenge for his wife. With that said though, I did find it interesting what the cockroaches do after he secludes himself and researches. The aftermath of that doesn’t make a lot of sense though either and the ending did not as well. I don’t get how it would play out that way or why they would want to. It does seem to end a little bit too convenient in this way.

The acting I felt was decent. No one really stood out to me, but no one was overly bad. I do feel that the writing of the film had a little to do with that, because we really got introduced to many of the characters and we don’t get a lot to connect with that. I think in part was due to the experiments takes up a large portion of the running time. Dillman I did feel bad for, losing his wife as he did and I understand why he’d lose grip with reality. Not sure I believe he’d end up doing what he did though because of it. It was also good to see Patty McCormack as an adult in this film. She was in film The Bad Seed, which I really enjoyed. McCormack has such a natural beauty that I’m glad she was in this film.

This film came out in 1975, so they used only practical effects, which I was a big fan of. There were live cockroaches used, so those looked great. They did freak me out, so I’ll give the film a boost there. Even the lighting up as they start fires looked good to me. The editing didn’t really stand out to me, except when they were writing messages on the walls. If you see the film, you will know what I mean. Then the soundtrack had an electronic sound when the bugs were on screen. That helped to make the film seem even creepier. Other than that, the scenes had no sound which can be effective. For this film, it didn’t really alter the scenes except when the soundtrack for the bugs was more noticeable.

Now with that said this film I’m kind of torn on. I personally enjoyed it, but felt it was slightly above average. I like the concept of an earthquake happening and it opening up a cavern for a possible creature like in this film to escape. I didn’t find the reason for Dillman’s character to do what he did halfway through and I feel the ending wasn’t great. The acting in the film was decent, but there wasn’t much there either. The use of real cockroaches and practical effects I was a fan of. There wasn’t a lot in the way of editing, but the soundtrack for the scenes with the cockroaches was good. I would say if this sounds interesting, give it a chance to see how you feel about it. I personally found the film interesting, but it had some flaws for me.