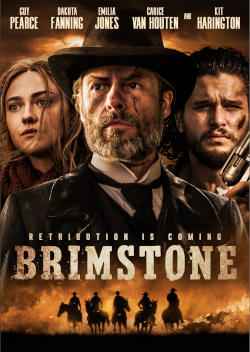 This is a movie that I heard about when I first got into horror movie podcasts. It is one that was debated whether it was horror or not, but most everyone liked this regardless of where they fell on that. I put it on a list of movies to see, but just hadn’t gotten around until it popped up on the Podcast Under the Stairs’ Summer Series list for 2016. That helped me move it up my list. The synopsis for this movie is from the moment the new reverend climbs the pulpit, Liz (Dakota Fanning) knows she and her family are in great danger.

This movie is broken up into four different chapters. For the first one, it is titled Revelations. We are following Liz. She does not have a tongue, so she needs to use sign language. With her daughter of Sam (Ivy George), she is what I take to be a midwife. Liz is married to Eli (William Houston). He has son of Matthew (Jack Hollington) and doesn’t care much for his stepmother.

As the synopsis states, things all change when they go to church and there is a new reverend, Guy Pearce. After the sermon ends, Eli introduces the family to him. Liz isn’t there though. She does have to go back into the church when a local woman goes into labor. This becomes an interesting event in that she cannot save both Abigail (Charlotte Croft) and her baby. She asks the mother, who holds Liz to what she told Abigail’s husband Nathan (Bill Tangradi), that it would be fine. Liz makes an extremely difficult decision that will have major implications later and this family blames her for it. While this is happening, The Reverend is watching over her.

When Liz and her family return home, she tells her husband that they need to go. He doesn’t understand why and believes in the reverend. That night, Nathan comes to their home for vengeance. The Reverend calms him down. We think it is because Liz made the right decision. There is a much more sinister reason. The next two chapters fill in the truth of who Liz is and how she relates to this reverend. Our final chapter is the showdown and the resolution of her story.

That is where I’m going to leave my recap as I think that fleshes out the synopsis enough. Where I want to start is something I’ve heard people talking about regarding this movie as to whether this is horror or not. For me, it is. At the heart of it, we are getting a western. We are seeing how difficult life was for these people. There was lawlessness as the land is still wild. The events of chapter 2 are interesting as that town has its own set of laws it feels like. I’m assuming they weren’t states so that would make sense. Life is as I said is tough in the west but being a woman would be even worse. Childbirth can be hard in a modern hospital. Taking that away and trying to do it like they are here would be terrifying. This isn’t what makes it a horror movie. What does is the character of The Reverend.

Now I’ll be honest, at the time of writing this I’m not all that versed in western movies. I’ve seen some of the major ones and some of the lesser John Wayne movies with my father who loves them, but I’m no expert. I’ve heard that this movie follows a similar vein to western films that border on being horror or having supernatural elements with this character of The Reverend. During the first chapter, he’s menacing. In chapter two, he dies or at least we think he does. It is a chance he survives though. I’ve seen another movie where that is the case actually and I believe that one was is based in truth of a real person. I take it he died though. Chapter three is giving his back-story and I’ll be honest, it made me hate him even more. I believe that he’s a demon or that he has come back from hell for his vengeance. It can be read that he’s just a psychopath who can take some of the damage he’s enduring and survive, so it is how you read it. Regardless, Pearce does a great job in this role. He is menacing and terrifying, which is what we need.

Then with that out of the way, I’ll shift over to our star of Fanning as Liz. She is a mute. She doesn’t have a tongue. When we first meet her, she seems like a normal member of society. As we go into the past, we learn more about her and she’s endured a lot to be the wife of Eli and have this family. It made me feel even worse as to what she must continue to take on with how rough her early life was. Going along with this, I want to credit here Emilia Jones who is playing the role of Joanna. She is faced with some tough things that affect her character. Both are quite amazing to be honest. I’m glad to see that Fanning, who was a child star, continues to show why she is a good actress. I like the tough roles she has taken on in her career. Jones is someone that does show promise in my eyes.

That should be enough for the story, so I’ll go to the rest of the supporting cast. It is interesting to see Carice van Houten and Kit Harington in this movie, as I know both from ‘Game of Thrones’.  Van Houten is interesting as Anna, the mother of Joanna and wife to The Reverend. I feel horrible for her character and what she endured. It is interesting though to see how this alters the life of Joanna. Harington is Samuel and although his role isn’t big, he effects this young woman’s life as well. We have Paul Anderson as Frank who is solid. I thought Houston, Croft, George, Tangradi, Hollington and Jack Roth are all solid as well. They all play different parts in getting our characters to where they need to end up.

Finally, I’ll go into the effects, cinematography and the soundtrack. For the former, they go brutal with them and they look to be done practical. I was impressed there. It does also feel like we are seeing these characters living in the old west. I’ll give credit to the cinematography there as well. We get great establishing shots that are beautiful. The bleakness we can feel at times is helped by this as well. The soundtrack didn’t necessarily stand out. It does work still and fits for what was needed. I did think that the sound design, especially when we can hear The Reverend, but not see him is creepy at times. That reminded me of Night of the Hunter now that I’m thinking about it and it is effective.

So then in conclusion here, this movie is one that I’m glad I can say I’ve finally seen. We are getting an interesting look at living in the old west and how hard it was. Some might not consider this to be horror, but there are dark enough elements that it should be considered at the least adjacent. The Reverend is a terrifying character to which I’ll give credit to Pearce for. Fanning and Jones play characters that go through traumatic things. The supporting cast helps push them to where they go. The effects are good and look realistic. The cinematography is great and the soundtrack works for what is needed. I would say that this is a good movie, almost great. I’m interested in checking this out again now that I’ve seen it to see where I go with a second viewing.