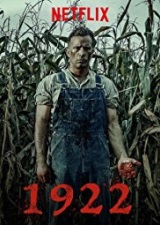 This film begins with a man in the city entering a hotel room. This man is Wilfred James (Thomas Jane). He goes to a wall and listens for a second. He then takes a seat at a desk, starting to write a letter. From it, we hear his voice-over narration and we get this throughout the film. He starts to tell the story of what happened to him and what he did in the year 1922. The official synopsis is a simple yet proud farmer in the year 1922 conspires to murder his wife for financial gain, convincing his teenage son to participate.

This is yet another Stephen King adaption that came out in the year 2017. This one also came to Netflix and it was much quieter than Gerald’s Game. I have read the novella that is based on, but I don’t remember much of it unfortunately. I do have to say that I plan to reread it now after seeing this. I really enjoyed this story. It is a haunting tale of wanting something that isn’t yours and committing a horrible act to get it. It is just terrible to think that he would have his son help him to kill his wife and his son’s mother. Despite what he did, I felt bad for him, because everything falls apart. It is due in part to guilt, but a curse is also placed on him for his act. It is similar to tell-tale heart in this respect. A big difference from that story that no matter what he does to get away, it follows him. I also really enjoyed how the film ended as well.

The acting was really good in this film. For some reason Jane gets a bad rap for his acting, but I thought he was really good in this one. I believe his accent that he could be from the Midwest. He also comes off as a simple farmer, thinking that just murdering his wife could solve his problems. Seeing him deal with everything came off very real. I also want to give credit to Dylan Schmid. His portrayal of Henry James was solid. He plays the brooding teen well and looks like he really dealing with the guilt he has. Molly Parker was also very solid as Arlette James. She gets murder pretty early on, but her specter makes a lot of appearances and I thought she played that well. The rest of the cast rounded out the film well in my opinion.

The effects in this film were kind of hit or miss for me. There was some CGI and I could tell. It didn’t always bother me, there were just moments that it did. There just were some moments with the rats that didn’t work for me. The practical effects were good, like the killing of Arlette though.

The editing of the film could have been tightened up a little bit in my opinion as well. The film kind of meanders near the end, which doesn’t ruin the film, but it lost a little of its tension to me. I just think it runs a little long.

The score of the film was really good though. The use of music in one scene was creepy. Others it helps to build more tension which was good.

Now with that said, I would recommend this film. It is definitely a haunting tale of when a plan of murder backfires. The guilt of what they of their crime and the ghost of the woman come back to extract revenge on them. The concept is really good. I thought the ending was as well. The acting was very solid across the board with Jane, Scmid and Parker doing an excellent job. The effects were hit or miss for me. The editing could have been tightened up. The score was another bright spot. This is a period piece so keep that in mind. I definitely think it is worth a viewing, especially if you’re a Stephen King fan. This is a good film to view.