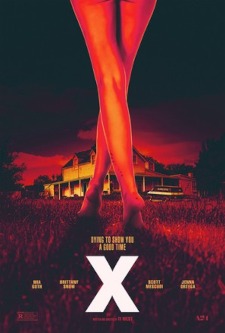 This was a movie that when I learned about it, I was excited. I try to temper my expectations in cases like this to not be let down. Ti West is a writer/director who has movies that I enjoy, so that added to it. From the bit of the trailer I saw, this had my attention. Jaime and I went to see this at the Gateway Film Center during opening weekend. I’ve now given it a second viewing ahead of making my top horror films of 2022 list.

Synopsis: in 1979, a group of young filmmakers set out to make an adult film in rural Texas, but when their reclusive, elderly hosts catch them in the act, the cast find themselves fighting for their lives.

Now the synopsis is a bit off, but that is the gist of the movie. We start by seeing the aftermath of something. Sheriff Dentler (James Gaylyn) arrives and he’s joined by deputies and other police officers. Whatever happened here was a bloodbath. The movie then shifts 24 hours before.

We then meet Maxine (Mia Goth). She is in a dressing room and snorting cocaine. She is joined by her boyfriend, Wayne (Martin Henderson), who is also her boss. From what I’m gathering, Maxine is a stripper of sorts. She works with Bobby-Lynne (Brittany Snow). As the premise said, they’re going off to rural Texas to make an adult film. Wayne is the executive producer. The director and cinematographer is RJ (Owen Campbell). He also wrote the screenplay. Also joining them is his girlfriend, Lorraine (Jenna Ortega), who is working as the boom microphone operator as well as his production assistant. The male star of this movie is Jackson (Kid Cudi).

The movie does well in establishing that during this time in in Texas, things are hard. To save money, they’re renting a boarding house from Howard (Stephen Ure). It is a long drive to get there. They are also in a deeply religious area. We get this from a gas station they stop off at where the clerk is watching a televangelist on television. This minister is Simon Prast. I should also point out that Howard watches this same preacher at home.

Just a bit more background about our group, Maxine wants to be a star and will do whatever she can to get there. Bobby-Lynne understands her place and doesn’t have issues using her body to get what she wants. Wayne wants to make money and I like that he even references Debbie Does Dallas as his inspiration for what he is doing. RJ wants to be a real filmmaker and he sees this as his first chance.

When they arrive at the farm, they’re ‘greeted’ by Howard. He doesn’t seem to remember their agreement and he’s not nice. There is an uneasy understanding between him and Wayne. It doesn’t help that Wayne is a smooth talker. Howard wouldn’t approve of what they’re doing either. Maxine notices someone looking down at them from a window. This turns out to be Howard’s wife, Pearl.

Our group goes about shooting their movie, but things take a dark turn as our hosts are scarier than the group originally thought.

Now that seems like enough of fleshing out the synopsis and introducing our characters a bit more. Where I want to start is that I believe this movie does a great job at its set up. Jaime and I were talking after the movie ended and I said that West is known for doing slow-burns. She didn’t think this movie was slow from the start. I can agree with her there, but the horror elements don’t start until I’d say past the halfway point. She pointed out though, we get the making of this adult film that keeps your interest until then. I agree there. I’d even go farther to say that dread starts the moment this group gets into the rural part of Texas. They’re from Houston if memory serves. Where they go is closer to Louisiana as we are getting bayous. This movie does feel like it borrows a bit from The Texas Chain Saw Massacre or even Eaten Alive. I don’t mind the paying homage with the story elements. With this second watch, I noticed there are also ones to certain shots and how things are framed which I appreciate.

Where I’ll take this then is the social commentary here. Some people might groan at this, but it is done subtle. The major one we get is sexuality. Maxine and Bobby-Lynne both are comfortable with theirs. They don’t mind getting naked or having sex with someone they don’t have deeper feelings for. Wayne has even come to terms with it from life experiences. Both women have sex with Jackson on film. Maxine has an interesting backstory that doesn’t necessarily add a lot, but it is an interesting reveal. Knowing this coming in makes more sense with a recurring item. Now we are juxtaposing this with Lorraine. Her nickname in the movie is ‘Church Mouse’. She doesn’t talk a lot. She also stares at the other women and they think she is a prude. She does surprise everyone by also wanting to be in the movie after they’ve gotten started. This is interesting as it upsets RJ. This becomes the catalyst for the events of the night.

Sticking with the idea of sexuality, we have Pearl. She interacts with Maxine and we get some reveals to her character through pictures. I didn’t understand fully until things that happen later. This elderly couple harbors secrets and I found it to be interesting. I do find some of this problematic though, just due to their age and how things play out. It doesn’t ruin the movie though. This is also taking on the idea of sexuality and contrasting it to religion. It tends to make people more prudish, hence the nickname for Lorraine and things that are said by the televangelist. It makes sense for a reveal of a character for sure. Our group also knows that what they’re doing is wrong in not telling Howard. Wayne is taking advantage of him. It also builds tension with worry about him finding out. To finish out this idea on secrets, it is interesting that Howard watches this preacher on television, while also doing the things that he does and covering for his wife.

I don’t think there is more that I need to go into with the story, so I’ll take this to the acting. I thought it was good across the board. Goth is solid as our lead here. She is one that doesn’t do a lot, but I’m loving that she’s stuck to the horror genre for most of her young career so far. What works for her is that she is determined to be a star. There is also a past with her that worked. She just goes beyond her character as well. Ortega is good as our reserved woman in the group. I liked seeing Snow as the more sexualized lady. We do see her and Goth nude if you’re interested. Kid Cudi was good as Jackson. I liked Henderson as our greasy character. I was glad to see Campbell here as he’s an actor that has impressed me in everything that I’ve seen, this included. Ure and the rest of the cast rounded this out for what was needed as well.

That will then take me to the effects, cinematography and soundtrack. This movie becomes a slasher film with exploitation elements. I like that the kills are implementing different tools you’d find on a farm. That adds a good element. They are also brutal. From what I could tell they were practical. If not, they hid what they were doing well which worked for me. The cinematography is great. We get some beautiful shots and I also think it is edited masterfully. There is homage here as well with some shots to Texas Chainsaw which I thought were a good touch. The soundtrack is something else that I thought works well. We get songs from the era. There is also music that ramps up the tension and the atmosphere.

In conclusion, I’m glad that I saw this. We are getting an interesting period piece slasher film. There are elements that add commentary, which ticks boxes for me. The acting is good across the board. I thought the effects were as well and they go brutal. This movie looks beautiful and of the era. What they do with the soundtrack works as well. I’ll be honest that I have this up there as one of my favorite West films. I thought this was good after my first viewing and that is just cemented with giving it a rewatch. One of my favorites of the year, as well as in the slasher genre in general.