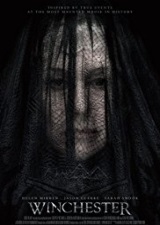 This film begins showing us the Winchester mansion back in 1906. We are informed that this is inspired by true events. We see the impressive, expanding house and a brief view of its owner as she walks the hall, with a black veil over her face, Helen Mirren. We then see a mother, Sarah Snook, and her son, Finn Scicluna-O’Prey. They are sharing a bed and Scicluna-O’Prey gets up in the middle of the night. He walks off. His mother then wakes up and goes looking for him. They end up at a staircase that goes to no where and his face changes for an instant.

We then cut to Jason Clarke. Currently he has three prostitutes in his house and he is a doctor who is on a sabbatical. We learn that his wife has passed away, she is Laura Brent. He is kind of a downward spiral from this. It should be pointed out that he also died during the incident and was brought back. He shows one of the women a magic trick. As he is seeing them out, Tyler Coppin, is at the door.

The two of them meet and we learn that Coppin is from the Winchester Repeating Rifle Company. He explains the situation of Mirren to Clarke. Since her husband and child have passed away, she saw a medium who is telling her to continue to build on her house. The company is worried and is seeking out the help of Clarke to diagnose Mirren unfit to run the company. Mirren has agreed to allow Clarke to stay in the mansion while he performs his assessment. He has quite the debt at the moment and agrees.

It should be pointed out that Clarke is addicted to one of his prescription drugs. Clarke is brought into the house and he meets one of the butlers, Eamon Farren. He is taken to a study where he waits for Snook. While he is there he notices the window is open. Papers blow off of a table by it. He then sees a cabinet as its doors shake. This intrigues him and he checks it out. This is his first taste of the oddity that is the house; it opens to the hallway where a maid was cleaning it. He is then joined by Snook.

She lays down the ground rules of the house. She checks to see if he has any guns and advises him that while staying in the house, he should lay off the alcohol. She believes that Mirren is with it and that her sense of smell is acute. He takes her words.

As Clarke prepares for dinner, we see him take a little bit more of the medicine he abuses and then gets spooked by his mirror moving and an entity. Did he really see it or was it the drugs making him hallucinate?

It is at dinner that he meets Scicluna-O’Prey as well as Mirren. She informs him that the reason she is doing everything that she does, because the guns that her company makes have killed so many. She is building the place to hold of its ghosts as repentance. She agrees to allow Clarke to do an assessment on her.

She adamant that she isn’t crazy and that there are ghosts in the house. Clarke doesn’t believe there is, but he does start to see odd things. That night he has to save Scicluna-O’Prey, as he has a bag over his head and tries to kill himself by jumping from the second story. He doesn’t remember any of it. It is then that Mirren wants everyone kept in their rooms unless she summons them.

Clarke finds a way out of his room and watches Mirren as she seems to be drawing a room while in a trance. He is spooked and flees back to his room. He starts to hear weird things from tubes in his room that are used for communication and he is drawn to the garden room. It is sealed though with wood and nails. He can’t get the head foreman, Angus Sampson, to even let him in.

Why are some of the rooms sealed? What is inside? Is this place really haunted or is Clarke seeing them due to the drugs? What will be his assessment during his time at the Winchester mansion?

I had seen previews for this film and I’ve been intrigued. Growing up, my mother was really into ghost stories; especially ones that she thought might be true. This is one of the ones that I’ve known from her. I do like that by basing this on true events, that they stuck as close to the true story as possible. Visually this film looks good. I will admit that the house when showing some exterior shots does look like a model to me. They did keep with making the house look inside as crazy as the images show. The story that the house was built to accommodate all the ghosts killed by the rifle is what she really believed. They didn’t touch on the fact though that she slept in a different room every night as to keep the ghosts confused. I did like the twist of a certain character and Scicluna-O’Prey being susceptible. I did find the ending sequence to get a little bit cheesy unfortunately. I did really like that Clarke only sees things after taking his drugs and I wish they would have stuck with that longer as well.

I will say that the acting for this film was really good. Mirren is as solid as ever. Clarke is a guy that everything I see him in, I enjoyed. He does a solid job in this film as a broken doctor who needs to find himself. Snook was solid in her role and I like the turn that she makes in it. Scicluna-O’Prey was pretty good for being a child actor. He has some difficult things to do in the film and thought he did well with it. It was fun to see Sampson in this film as well.

Now this film tried to do a lot with CGI and it kind of hurt the film for me. It doesn’t look bad, but some of it just comes off as cheesy which I wasn’t a fan of. It also seemed to rely too heavily on jump scares, which I don’t like either. I think that using them is fine, but don’t use that as the main source for scares. The editing of the film I felt could have been tightened up. We get an image of Mirren early in the film, but we don’t actually get to meet her until almost 20 minutes or so in. It also lagged a bit during Clarke’s investigation. I normally love that part of film as story is what draws me in and I was bored unfortunately. The score really didn’t stand out to me either, but it also didn’t hurt the film.

Now with that said, this film is above average in my opinion. I thought there was potential to be much better, but it disappointed me. I loved the true aspects that were incorporated in; including during the climax half the house is destroyed. An earthquake really did happen that year and the house was damaged. I do feel that there were some aspects that could have been explored to make the story much better. I wasn’t a fan of the ending. The acting of the film was really good. The effects were all CGI and I was disappointed by that. The editing had some issues and the film could have been tighter. The score didn’t stand out to me. This is a slightly above average haunted house film in my opinion. It does play out much more like a supernatural drama.