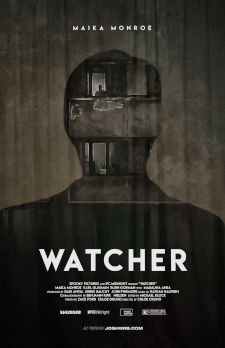 This is a movie that went on my radar because it played at Sundance. Seeing that Maika Monroe starred, that was another positive. I missed this when it came to the theaters as I couldn’t make the times work for my schedule. I ended up renting this on VOD. I also read the synopsis ahead of seeing it as well.

Synopsis: a young American woman moves with her husband to Bucharest and begins to suspect that a stranger who watches her from the apartment building across the street may be a local serial killer decapitating women.

We start with our couple in a taxi. The wife is Julia (Monroe) and her husband is Francis (Karl Glusman). His family is from Romania so he knows the language. Julia doesn’t though. We get a feel of this with the driver. He does teach her the word for beautiful or a variation of it.

Our couple moves into an apartment. They’re shown the place by the landlord. The overhead light isn’t working though. That night, Julia has trouble sleeping. She gets up and looks out the window. These are floor to ceiling, so they’re large. There is an apartment building across the courtyard and she thinks she sees someone looking out their window, back at her as the synopsis states.

Things take a dark turn when our duo is coming home and happen upon a crime scene. The next day Julia sees on television that it was for a murder of a young woman. The report is in Romanian and doesn’t have subtitles. Francis translates information to her, but it also seems that he is hiding something. It comes out when a co-worker comes to dinner with his wife. The woman was decapitated. The killer has been slitting their throats and went vicious.

Making matters worse, Julia is bored. She was an actor but gave it up. Francis came here for a promotion, so they’re stuck. In her boredom, she becomes obsessed with this man across the way. She believes he is following her as well. This man she suspects is named Weber (Burn Gorman). Francis doesn’t believe her and neither do the police. The logical explanation is that he just lives in the area. Is Julia descending into madness due to not knowing the language and no longer having a purpose or is she right about this man across the way?

That is where I’ll leave my recap as we are getting a simple story. It is also one that we’ve seen before. This movie is built more on the performance of Monroe and then Gorman as things go on. This is a character study of Julia and that is where I’ll start delving first. She is someone who doesn’t know who she is. I can relate to this as I didn’t know who I was after graduating college. It is interesting is that my wife, Jaime, also felt this way. Julia was an actor and decided to give it up. She moved to a new country with her husband. She doesn’t know the language so we are getting the fish out of water scenario. Julia does make a friend in Irina (Madalina Anea), but she has a life of her own. Complicating all this is the fact that Francis works long hours. Julia aimlessly goes about her days. Monroe does a great job in her performance. I did want to say that before moving to the next point.

A major theme for this movie is obsession. Julia doesn’t have something to occupy her, so she falls into worrying about this person watching her from across the street. It is a steady build. At first, I can see where Francis or even the police officer doesn’t believe her. She is acting erratic. As things go, there is something that happens around the halfway point that makes pushes you in one direction. A buddy of mine on social media, Mr. Venom, points out that he hates in movies when a spouse or significant other doesn’t believe what the other is saying. At first, I side with Francis as the evidence isn’t there. There is a point here though where I don’t like that he won’t even consider. Back to the story at hand though, I like that the movie makes us question. The problem that I have is that it doesn’t do anything new. I knew where this was going and it made things slow. My attention was waning as things went on where I wasn’t invested as much as I was in the beginning. I do think the idea of someone watching you from across the way is terrifying. I have a phobia of people looking in through my window.

The last bit here is I want to delve a bit into the character of Weber. Julia sees him around and thinks he’s following her. In turn, she follows him to spy. This is where I side with Francis. His explanation is that Weber lives in the area so it makes sense you would see him at a local store or other places. There is nothing off there. Gorman plays this well. There is a stoic nature he brings. He also has a distinct look. If anything, I would have liked more from him. The story doesn’t warrant it though since it is about Julia. His performance was good for what the movie needed.

Moving over to the acting, I’ve already said what I need to about Monroe and Gorman. Both are good for their characters. Glusman has an interesting role. In the beginning, I understand him. He got a job of a lifetime. His wife came with him. Due to how much he works, it causes the isolation that is messing with her. Plus, he doesn’t believe her. His performance is good, I just don’t like Francis. Aside from that, Gabriela Butuc, Anea, Cristina Deleanu and Daniel Nuta are all solid in support. I’d say that the acting is good across the board.

Final things to go into would fall under filmmaking. I’d say that the cinematography is one of the best parts here. There are great shots from the beginning. We get this cool pullback of the apartment through the big front window. It almost is putting us in the spot of the Watcher. There are others that build tension. We don’t get a lot in the way of the effects, but it also doesn’t need them. What we do get though looked practical and I was impressed there. The blood and aftereffects of an attack were solid. Other than that, I’d say the soundtrack was good for building the tension the scenes needed.

In conclusion, this movie has a good premise. The problem with that is that it is one we’ve seen before. This doesn’t do enough to set it apart so that made it a bit boring for me. What is good though are the performances from Monroe and Gorman. The rest of the cast round out what is needed. The cinematography is great. The soundtrack fits what this needed. For me though, I did want a bit more. I don’t love this. It is still solid in my opinion though. I would say that this is above average.