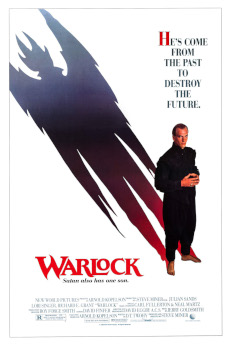 This is a movie that I feel like I saw the trailer on different VHS tapes. I saw the sequel before getting around this original one which happened a lot back then. This being pre-internet, of course. What I will say as well is that whenever I think of the actor Julian Sands, this is the first movie that pops up. I think he fits the role well, but I’ll get back to that later. I am watching this for the first time with a critical eye thanks to the Podcast Under the Stairs’ Movie Club Challenge.

Synopsis: a warlock flees from the 17th to the 20th century with a witch-hunter in hot pursuit.

We start back in the late 1600s. The movie gives us a brief look at life during the witch-hunt days of Massachusetts. A group of magistrates, with Ian Abercrombie playing one of them, wants a warlock to confess his crimes. He is chained as well as being bound with this thumbs to his toes. The warlock is Julian Sands. He is quite cheeky with his responses. Following this group is Redferne (Richard E. Grant) who I took as a witch hunter. A storm rolls in and it is the warlock doing a spell. He disappears.

The movie then shifts to present day. We are in a house in Los Angeles that belongs to Chas (Kevin O’Brien). He rents a room to Kassandra (Lori Singer). They hear a loud crash and find the warlock knocked out on the floor. They help him into a room to rest. This proves to be a bad idea. He kills Chas. The warlock goes to see a channeler, played by Mary Woronov. She communicates with a demon who tells the warlock to find the pages of a grand grimoire. With it, he will become the son of Satan on Earth. He takes her eyes in the process. This leads him back to Chas’ place. Hiding inside of an antique table are some of the pages of this tomb, he removes them. Redferne also shows up and Kassandra doesn’t know who to trust.

She soon realizes that Redferne is there to help. The warlock casted a spell on her that makes her age 20 years each day. She teams up with Redferne to find the warlock before it is too late. They also need to stop him from finding the rest of the pages, which have been scattered across the United States. It is a race against the clock and the ever growing magical powers of our evil wizard.

That should be enough to recap the story and introduce our characters. Where I’ll start is what I brought up earlier. I think that Sands is perfect as this villain. His accent makes it feel that he’s from this prior era. Going along with this, I think that it adds a bit of arrogance to the role that fits. Sands is supposed to be a powerful warlock, who I take to be a male witch. That is something else that I believe. I like the idea that he’s in the present. There is a wish out of water narrative with both him and Redferne going into the future. The former acclimates better than the latter. Part of that though is the warlock will kill when needed and Redferne needs to fit in more. To confirm, I think that Sands is great in this role.

Where I’ll then shift to is the journey in this movie. I like that the warlock is after these pages to become the son of Satan. He has the eyes of the channeler to help him find them. This is a simple premise to find pages of a book or a certain item to make our villain more powerful. I like these narratives as they remind me of my childhood. This is an adventure or road movie since Redferne with Kassandra is after him. They’re driving where the warlock gets the ability to fly. This all ends back up in Boston for the showdown which I liked. This movie was fun with all this for me.

The last bit for the story that I wanted to bring up is superstitions. Redferne relays these to Kassandra and I love it. One that stood out is when they go to the Midwest of the United States. They see a hex mark on a barn. This was put there by a Mennonite, played by Richard Kuss. He also believes in them. He noticed that cream was going bad over night and that their horse was sweating during the morning. This means that they’re bewitched. There’s also the ritual that is done to make it so the warlock can fly. That involves a little boy who isn’t baptized and helps make the movie mean-spirited, which I love. Now I don’t believe in things like this, but I love the idea to deepen the concept.

Shifting away then, I’ll go over to the acting. I’ve already said how much I like Sands so that is where I’ll leave that. Singer is solid as Kassandra. What I like about her is how quirky she is. Her character adds comedy which worked. She is also terrified, which I can’t blame her so that helps as well. Grant is great as the adversary to the warlock. They are the counterpoints of good and evil. Other than that, I’d say the rest of the cast was solid. I did want to give special credit to Kuss as the Mennonite, Abercrombie as a magistrate and Brandon Call as the little boy. I knew him from the television show ‘Step by Step’.

All that is left is the filmmaking. To go positive first, I think that this is shot well. It felt like we started in the past. I think the costumes for Redferne and the warlock are good. They feel like they’re from the past. There is an elephant in the room though. The early CGI effects here aren’t great. There are some that don’t hold up at all. Not all the effects are bad though. We get decent practical ones. It is just with things like flying and some of the magical powers that the warlock uses that don’t look good. Other than that, I thought the soundtrack fit for what was needed. It didn’t necessarily stand out or hurt the overall product for me.

In conclusion, I know that this is one that not everyone likes. This has an interesting story that is incorporating a male witch coming from the past to the future. There are plot holes, but nothing that ruins it. I like incorporating superstitions into this as that adds a layer for me. I think that the acting is good. There are issues with the effects, but what is done practical works. The soundtrack and cinematography are solid as well. Not a great movie, but I do have fun with this one.