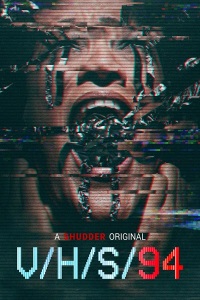 This is a sequel that I didn’t realize they were doing until it popped up on an October movie challenge that I was participating in. I didn’t get around to seeing then, but I knew I would check it out. I decided to go ahead and pair this up as a Featured Review on Journey with a Cinephile: A Horror Movie Podcast. What I will say is that I enjoyed the original and the sequel, but the last one was a letdown. The synopsis here is a police S.W.A.T team investigates about a mysterious VHS tape and discovers a sinister cult that has pre-recorded material which uncovers a nightmarish conspiracy.

For this movie, we are starting with the story of ‘Holy Hell’ which will serve as our wraparound story. We have this S.W.A.T. team that is made up of Petro (Kimmy Choi), Nash (Nicolette Pearse), Sprayberry (Thomas Mitchell), Spivey (Rodrigo Fernandez-Stoll), Oursler (Dax Ravina), Tom (William Jordan) and Slater (Dru Viergever). There’s also a cameraman, Gary (Kevin P. Gabel). They believe there is a drug ring inside of this warehouse. They’re going in to break it up. We will come back to this story a few times, but things aren’t what they were expecting inside. They’re bracing for a Waco style standoff and it is much more of a nightmare. Not everyone is who they seem and the tapes around this place might harbor a dark secret.

The first story that we go into is ‘Storm Drain”. Holly Marciano (Anna Hopkins) is a reporter that goes into the sewers with Jeff (Christian Potenza), who is her cameraman. They’re following a story about people seeing a half-rat, half-man creature called, of course, Ratman. Their producer wants them to go into the sewers, but at first they’re against this. They see an odd guy staring at them so they go a bit deeper into the entrance to film their story. They hear something and decide to go farther. They discover what they were looking for and much more.

We get a commercial here before going to 'The Empty Wake’. This has Hayley (Kyal Legend), an employee at this funeral home, running a wake while her bosses leave for the night. Only one person shows up and creepy things happen. There is a storm outside that is getting worse, causing issues with the lights. Hayley decides to call her friend to learn about the person who died. Things take a dark turn as the power goes out.

The next story is ‘The Subject’. This has a scientist, Budi Ross, who tries to combine humans with technology. When he thinks he has succeeded, an S.W.A.T. busts into his laboratory and mayhem ensues from there.

Then our last story is ‘Terror’. We are following a religious based militia. They are a group of guys who have weapons and are training to attack a government building like in Oklahoma City. What they really are is a terrorist group. They’re led by Greg (Christian Lloyd) and they’re holding a man prisoner, Brendan McMurtry-Howlett. We see as they execute him. As they prepare to attack a federal building and they’re buying an arsenal from a familiar face. This prisoner plays a bigger part of their plan. There is a snag when they decide to celebrate ahead of their mission and this prisoner’s dark secret gets fully revealed.

That should recap the stories that we have here enough. What I will say is that this is a solid anthology film. We have an interesting group of stories here where none of them were bad for me. The first one is intriguing because it takes place in the city I reside in Columbus, Ohio and explores the urban legend of the Raatma. I don’t love where they take it though. ‘The Empty Wake’ is an interesting story with some terrifying realism there. ‘The Subject’ is cheesy fun and deals a bit with body horror in the vein of Tetsuo. I do think that the names are flipped for ‘Holy Hell’ and ‘Terror’. I did enjoy ‘Terror’ and what they did there. It is mocking militias and shows how bumbling they are. It feels close to how many of them are. ‘Holy Hell’ is interesting, but I think it is lacking a bit. I want to know more. What I will say is that there are a few of these that I would be fine if they fleshed out a feature as there are some interesting ideas here.

Since these are all shorts and not a lot to the stories, I’ll move this over to the acting next. I’m not going to break down everyone as we have a lot of people involved. Hopkins was good as Holly. I rather enjoyed where her character ended up. Legend is someone else that I felt the same for. She has to do a lot by herself or talking to someone over the phone until things get crazy at the climax of her story. She did a good job there. I liked Ross as the mad scientist. Capt. Hassan (Donny Alamsyah) was insane so it makes an interesting dichotomy when his S.W.A.T. team busts in. Jono (Juan Bione Subiantoro) is a member of that team who has a heart and doesn’t necessarily take orders blindly. That adds an interesting element. The guys play their roles well in ‘Terror’ and the same for ‘Holy Hell’. No one was bad, but no one was great either. Being this is all found footage, I think that works. It adds an element of realism to these wild stories.

I’ll go then to the effects, cinematography and soundtrack. As for the effects, this is interesting to grade a movie on when you have multiple shorts done by different people. There is some CGI here that works well when it is kept in the shadows. I’ll give credit here to ‘Storm Drain’, ‘The Empty Wake’, ‘Terror’ and ‘Holy Hell’. I could tell it was CGI most of the time, but it was only ‘The Subject’ where I had some issues with it really. It doesn’t ruin the movie. I’d say though across the board that the cinematography was good. Each director has their own style that comes through. As for the soundtrack, it doesn’t necessarily stand out, but it fits. Once again, had no issues there for what it was doing as the music seemed to be all diagetic and adding to the realism.

So then in conclusion here, this is a solid anthology. None of the stories are great to me, but what I will give credit here is that none of them are bad to me either. If I have to choose, I’d probably give it to ‘Terror’ or ‘The Empty Wake’ as my favorite. The acting is good across the board. The effects are as well, but there were some issues with the CGI for me. Cinematography is good though and I’d say that the soundtrack works as well. They do some good things with the sound design that I enjoyed. Overall I’d say this is above average and just missing out on being good.