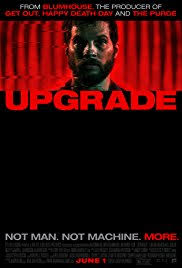 This was a film that sparked my interest but wasn’t sure how good it would be or if this film was horror or not. I saw that it is listed that way on the Internet Movie Database, so I decided to check it out. That first viewing was at the Gateway Film Center. I’ve now given a second viewing as part of the Summer Series for the Podcast Under the Stairs. The official synopsis is set in the near-future, technology controls nearly all aspects of life. But when Grey (Logan Marshall-Green), a self-identified technophobe, has his world turned upside down, his only hope for revenge is an experimental computer chip implant called STEM.

Now this was a film that I really like the concept of. I feel like as a people we are a slave to our technology and it both scares as well as intrigues me. I catch myself being on my phone a lot. There is so much that can be done from it. Being afraid of this is Grey Trace. He works with his hands on cars and doesn’t like to use the technology that is around him. His wife is Asha (Melanie Vallejo) who is quite the opposite; she works with a tech company.

The two of them experience tragedy when Asha’s car which has an auto drive function gets taken over and they’re taken to a rough area. We learn later that Grey grew up in this area. They crash and they’re removed from their car by a nefarious group and then attacked. Asha is killed and Grey is left paralyzed. He gives up on life. A computer genius, Eron (Harrison Gilbertson), offers him a state-of-the-art computer that attaches to the brain stem. The two met when Grey restored a car for him. It would allow him to walk again. I really liked this, because it throws Grey off when the computer starts talking and wants to help him get revenge. STEM voiced by Simon Maiden.

There is an added dimension that there are drones that check for crime. The detective in charge of his case is Cortez (Betty Gabriel). She is like Grey in that she’s not the biggest fan of technology either. It raises the stakes that she is trying to solve the crime, but still being handcuffed by the law. When he starts down his path, she must try to stop him. It isn’t even necessarily that she doesn’t want justice, but she wants it done the right way and worried that something bad could happen to him with the group he is dealing with.

I like the revenge aspect of this film. It is something we can relate to, but this film takes it to another level. The computer makes him into a killing machine that can fight with great skill. The investigation is interesting and I think that is where the editing of the film comes in. It builds tension as more and more of the story is revealed. It is enjoyable him piecing things together and breaking away from Eron. I like how the film ends, even though some of the aspect is a little bit obvious. I didn’t remember the full reveal, but I said it early into rewatching this and I was right. The final sequence though is great and exactly how I like films to end.

Next part of the story I want to delve into is technology. The first sequence that we get introduced into this world is through Grey. It feels like this is taking place in our modern time. We then get to see that Asha comes home in a car that drives itself. When we see the city, it is high-tech. Eron talks about this computer he is creating that will change the world. There are police drones that are watching for crime. There are computer databases that are used in solving crime. We also get to see this group that are known as ‘upgrades’. They have wires and biomechanical things inserted into their bodies. This makes for some cool things that play out here.

Then the last thing to delve into here using idea of technology and how it can take over. I explored this a bit earlier. Technology is a blessing and a curse. It allows us to do so much at our fingertips. This movie is also dealing with the idea that technology could take over if we allow it. Grey is leery of this. This isn’t a new concept here. Terminator is like this or something like Pulse. Where this movie goes is something that I liked quite a bit. The ending is quite bleak as well which I’m always a fan of.

From there I must go to the acting. Marshall-Green is great as the lead. He plays such an interesting character in a world that is built around him. I felt horrible for him and seeing him giving up on life was depressing. I did find myself getting excited when he is getting his revenge, even though he is committing crimes in doing so. It is one of those things that you think about what you’d do if you were in that position. I must give credit here to him as well as he acts robotic when STEM is in charge. That is a subtle thing that works and fits the character. I thought Vallejo was cute and her character was good. They also bring her back for flashbacks and other things to build the story. Gilbertson is good as the computer genius. He comes off as very timid and awkward, which is fitting for the character. Gabriel was also very solid as the detective. I also found the villains to be good in their performances as well. I like that we don’t get a great look at their faces so as Grey is encountering them, we learn more. The rest of the cast rounded out the film well.

The effects of the film are good. They are brutal, which I wasn’t expecting that first time coming in. The blood has a good look and effects for the gore looked to be practical. The use of technology was also good. I loved how the action sequences are filmed. They’re not traditional and done with some solid effects. I thought this was a strong part of the film.

The sound of the design was also something that was nice. It fit the scenes for what they were going for and it helped build the tension. The score does have a techno feel to it which keeps with the theme of the film and the world that it is set in. I also like that Grey can hear STEM talking, but no one else can. It makes him seem like he has mental issues. That worked for the movie needed.

Now with that said, I enjoyed this film. I wouldn’t really consider this to be a true horror film, as it is more of a sci-fi thriller with some horror elements to it. It is made by Blumhouse and is the directorial debut for Leigh Whannell who also wrote the film. I thought the film has a solid concept and the execution is good for the most part as well. I like the ending even though some parts of it are obvious. The editing of this is good in building to tension to that climax. I thought the acting was also good across the board; I didn’t really have any issues there. The effects were also solid and the sound design of the film helped for what they were going for. I don’t think this film is for everyone, but I love the issues they bring up with technology and the dangers of it. I would recommend seeing this film as it is just fun with a good story about it.