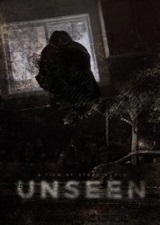 This film begins with a man talking to a picture and holding something up to it. He is played by Steve Merlo who is also the writer and director of the film. He calls the picture Jenny and we see him go into the kitchen. There is something not quite right with him.

We then shift to a park where a young woman is sitting by a tree and is writing in a journal. She is played by Shalyn Lisson-Smith. Merlo stalks around the tree, calling this woman Jenny. She looks and he grows around to the other side. She panics as she is attacked.

The film then shifts to a café where a couple is on a date, they are played by Darah Kotanko and Clancy Maguire. They are at the end of it and went well. Kotanko reveals that she has been leery about going out as her last boyfriend was crazy. Maguire seems like a nice guy and that they have hit it off. She does tell him that she still needs to take it slow.

While they are sitting there, we through the eyes of Merlo as he stands up and we shift to see him walk past the table of the couple in the glass behind them. Kotanko stays in the café to read when Maguire leaves. They exchange numbers before he leaves.

Merlo is waiting outside though. Is Kotanko his ex-girlfriend? Is he the crazy ex she is referring to? What will happen to Maguire? What about Kotanko? Is she safe?

I have to say that I was given the opportunity to watch this film before it was released by the director. The first thing I really liked about this film was that we do not see Merlo as the killer. We only get glimpses to see that he is bigger than his victims. That is a technique that was done well by films like Halloween or Friday the 13th. I believe that less is more which works well for this film. I also enjoyed the ambiguity of the film, is Merlo Kotanko’s ex-boyfriend? The picture at the beginning does look similar to Kotanko as well as Lisson-Smith. I also have encountered shorts that are independent that lack crisp sound and final product, but this film has both which was much appreciated as well.

One of the biggest issues I have with this film is that if left me wanting more which was good. I have my questions that are left unanswered and as someone who appreciates the story, I would like to see this extended to maybe answer some of them. Now when saying this, I don’t expect the filmmaker to answer them if it is going to ruin the film, that some horror films tend to run into. Not everything does need to be explained. I did find it a little risky if Merlo was Kotanko’s ex that he would walk right past the table like he did, but if he isn’t, then this is a moot point. I was also slightly confused at the end as well, was Merlo locked in the room upstairs or was he back at his place?

Now with that said, I was impressed by this short film. The acting was good for being a lower budget production. I liked the suspense that is built by not seeing Merlo and him stalking his victims. This film does leave some questions that are unanswered, but it made me want more which is a good thing. The video and sound were crisp which was nice. I would definitely recommend giving this short film a viewing.