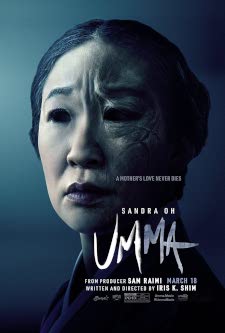 This is a movie that caught my attention thanks to trailers at the Gateway Film Center. I’ve been using them for 2022 to see what movies are coming to their location for this year. Once I realize it is horror, I tend to focus on something else to not spoil the movie. This one also caught the attention of Jaime and we saw it together during opening weekend. I’ve now given it a second viewing to see where I sat with it.

Synopsis: Amanda (Sandra Oh) and her daughter live a quiet life on an American farm, but when the remains of her estranged mother arrive from Korea, Amanda becomes haunted by the fear of turning into her own mother.

We start with hearing dialogue that is voiced over. It is a daughter talking to her mother. From what we are hearing, the daughter is being punished and the mother is harsh. It then shifts to Amanda as she takes a lamp into the basement of her house. She then shuts off the power.

The movie then shifts into the future. I believe around 16 years or so. Amanda has a daughter of Chris (Fivel Stewart). They live in isolation on their farm. From newspapers we learn that they have a successful honey business. They raise their own bees. They also live off the grid. Amanda is also convinced that she has a disease that causes her to not be around electricity. She is terrified of thunderstorms as well.

To make a living, Amanda also does the accounting for a local store that is run by Danny (Dermot Mulroney). He brings out supplies that she needs as payment. He also sells the honey that this farm makes. He reveals to her that someone online has been advertising her product and they cannot keep up with the orders. She comes up with the plan that they’ll expand and in turn, need more hives.

This isn’t necessarily the life that Chris wants to lead. She longs to have friends. When she goes to the store, she meets Danny’s niece by the name of River (Odeya Rush). The two become friends of sorts. Danny has also done some things to help Chris get out into the world. This was done behind the back of Amanda.

During Chris’ trip to the store, she encounters a man who speaks Korean. She cannot understand him, which annoys this man. It turns out that he is her great uncle. He changes their lives by bringing to Amanda the remains of her mother. They were estranged and from the events in the beginning, there seemed to be a history of abuse. Amanda changed her name and shunned her culture. The issues she had with her mother were unresolved. She needs to deal with them as she comes to terms with her own daughter leaving her. Amanda’s mother has deep seeded hatred that is manifesting itself and changing the lives of her family.

That is where I will stop with fleshing out the synopsis as well as giving a bit more background information to the characters. Now what I will say, there isn’t a lot to the story of this movie. We are seeing more of characters study here. What I did find interesting is that we’re exploring familial generations. Going along with this idea, this film is introducing those that don’t know about Korean lore with their religion. I would be included here and it was something I appreciated. This also feels like a personal story as well.

Where I will start then will be with our lead, Amanda. From the beginning, we know that she was abused by her mother. We see that she fears a specific lamp. She also has a fear of electricity. I figured that played in with the torture her mother did to her. We are seeing that Amanda has developed a psychosis by never coming to terms with it. Later in the movie, Chris confronts Danny about what he knows. He confirms that he knew about her disease and unresolved issues. He tried to get Amanda to talk to someone, but she refused. This is an interesting commentary on mental health and how we’re afraid to get the help we need. It is still looked down on and taboo. I’m thinking here we might also be getting that people from Asian societies are stricter as well.

Before moving from this, we get an interesting scene late in the movie where Amanda is confronting her mother. Her mother is portrayed by MeeWha Alana Lee. I like that Amanda confirms what this older woman went through and it humanizes her. The whole movie we are just hearing the horrible things she said and as we go, did to her daughter. I think this is a solid move when dealing with a vengeful spirit like we are here. Many times, especially in film, we are seeing how bad a character is without getting to see there was good there. I like what this movie does.

Next should be the relationship between Amanda and Chris. Since Amanda had such a rough upbringing, she has hidden her daughter from learning the ways that she did in Korea. This is an interesting look at assimilation into the United States. Amanda had a bad experience with her Korean roots. Chris then knows nothing of them. She is completely American. Going along with this though, Amanda is abusing her in a different way by hiding her away. There is a fine line here though. I don’t want to tell Amanda how to parent. I can see though that by isolating her daughter, she is stunting her growth. Despite what Amanda wanted to do, she has gone the other extreme to protect her daughter and in turn, is acting like her own mother.

The last bit about the story would then be the supernatural elements. Like many movies, there is a way to look at this as nothing is truly happening. I lean toward there is so that is where I’ll go first. From the moment this suitcase gets dropped off, Amanda believes she is seeing her mother. I think they do well here with building the atmosphere. It is creepy and I love that is playing with things being in the background. The camera is focusing on something, but the frame is being fully utilized. I give credit here as well to the cinematography. The other way to see is that having Amanda’s uncle show up has forced her to remember things and she is descending into madness from depression and guilt. It could be seen this way as it is Amanda experiencing it. Chris only does through Amanda and when she is acting different. Either way you look at this explains the movie. I think that she is feeling these real things, but also being haunted.

Where I’ll go then is the acting. I think that Oh is great here as the mother. She plays it so well. At one minute she is a loving mother who is a bit overbearing. She quickly shifts to being more like her mother so having that duality within her works. I thought that Stewart was fine. She does play her character a bit awkward at times, but I think that is on purpose. She is isolated and lacking life experiences. It adds a layer to her character for sure. Lee is solid as the ‘villain’. Mulroney, Rush, Yi and the rest of the cast rounded this out for what was needed as well.

The last things to go into would be the effects and soundtrack. For the former, we don’t get a lot of them. We also don’t need them either. I’m guessing what they did was CGI. I thought it looked good. There are times it is out of focus, which helps. Some are done with perspective of the character as well which creeps me out. What they do here is effective, once again credit to the cinematography as well. The soundtrack gets a lot of credit here. It builds the atmosphere that is needed. I also thought the voice-overs help give backstory which I’ll give credit to as well.

In conclusion, this movie was solid. It has a good set up that pulled me in. I like the commentary that we are getting here about parenting and the effects it has on children. There is also the fear of becoming your parent. The acting is good. It helps bring the characters to life. I like what they do with building the atmosphere. If I do have an issue, I think the movie loses steam as it goes. What they built in the beginning, didn’t have a payoff that I necessarily wanted in the end. I think part of this is again that it is a personal story. This movie is still one that I enjoyed. To me, it is an above average movie that just misses out on being good to me.