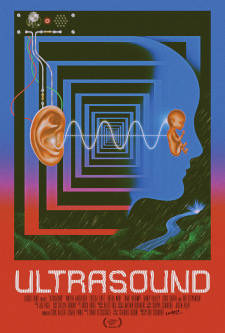 This is a movie that caught interest when I was at the Gateway Film Center. It looked intriguing, so I stopped watching the trailer. I almost didn’t go see this movie as everything I was seeing pointed to this not being a horror movie. What was the deciding factor is people in the community I respect are including it in their genre watches. This is something that I’ll come back to.

Synopsis: after his car breaks down, Glen (Vincent Kartheiser) spends one hell of an odd night with a married couple, setting into motion a chain of events that alter their lives plus those of random strangers.

We start this movie on a rainy night. Someone is in a car and drive over a strip of nails. This person is Glen. He sees a nearby house and goes to it for help. He is greeted at the door by Art (Bob Stephenson). Art invites him in and offers him a drink while he dries off. Glen then meets his wife, Cyndi (Chelsea Lopez). The two seem to be in a loveless marriage but staying together. Glen inquiries about nearby garages, but the closest one isn’t open until the morning. Art asks him to stay the night and offers to take him in the morning. It takes a turn when Art wants him to stay the night in his wife’s bed.

It then gets even weirder from here. Glen is at home when Art shows up. He somewhat forces himself inside to reveal that Cyndi is pregnant and that it is Glen’s. He isn’t sure how that is possible but agrees to see her. He gets a text message telling him to ditch Art and she’ll come over. She decides to stay with Glen.

Going along with this, Shannon (Breeda Wool) is working with Dr. Conners (Tunde Adebimpe). They are reciting lines that Cyndi and Glen said to each other. Both are being kept in this building as some sort of experiment. There is also Art who is working George (Tony Evangelista). He is a senator seeking re-election. It appears he’s running on family values, but he has a secret girlfriend by the name of Katie (Rainey Qualley).

There is much more going on here and the reality of how everyone is connected is interesting. I’m not going to go farther as that would go into spoilers. What I will say that is that I don’t necessarily think this is horror, but we do get some elements here. This is much more of science fiction with elements of drama and even thriller. How these elements fit in together worked. The first thing I’ll delve deeper into would be reality and how we perceive it. There are things from the beginning that if you’re paying attention, make sense as things get revealed. I found that to be quite clever. This is a movie that needs a second watch now that I know what they’re doing to see what I missed as well. Having done so, what I will say is that I didn’t see cheats. If anything, I’d say I have a deeper appreciation here with how deep this goes and the implications.

Going along with this idea, we have Glen coming to the house of Cyndi and Art. From what we are given in the beginning, these two are married. He was her high school English teacher, they got married when she was young and it is now loveless. That might not actually be the case though. We also see Art working with George and in turn, Katie. Like what this movie is doing with us, what is revealed is messing with minds. We see something and then it will change. It makes you question if what you saw was real or not. I think the movie does well in explaining it without going too far and ruining things. There is still an illusion by the end and allowing us as the viewer to interpret. Even the title of the movie, how ultrasounds play in with the story and how it is used was interesting to me. Something else to add, what they do with timeframes is also an intriguing piece as well.

Then the other part is Shannon, Dr. Conners and the rest of his team. We see them interacting with Glen and Cyndi. This is what confused me the most, but with the explanation there, it is the missing piece. What they’re doing with the two is an experiment of sorts. There is the shady government angle that comes into play here and with George, but I’ll be honest, it is done subtle. I can appreciate that for sure. What they’re doing with Glen and Cyndi also plays in with reality and not being sure what is real as well. To close out my ideas on the story, I was impressed how they could edit this together and it to make sense.

For a movie like to this to work, the acting needed to be good. I’d say that it fits. Kartheiser and Lopez are both solid. They play their characters of Glen and Cyndi well. We aren’t sure who they truly are and we see a couple of variations. I thought they were good, especially at reveals. I feel horrible for them to be honest. I could also throw in Qualley on a smaller basis. Wool is solid as someone that sees what they’re doing is wrong and wants to help. I like Adebimpe and Stephenson as mirrors of each other. One is doing a more scientific look where the other is using it to make money. I would say though, even in the end, Dr. Conners is as well with the funders that come see his experiment. Aside from that, I’d say the rest of the cast rounded this out for what was needed.

The last things to cover would be the filmmaking. For the cinematography, this is shot well. I’ve already gave credit to the editing, but I think working in tandem with the framing and the use of soft focus. It makes you question what you’re seeing and that is what the movie is going for. We don’t get a lot in the way of effects. It helps to make you question things so it worked there. The soundtrack is solid as well. We get to hear these tones, which are affecting our characters. That fit what the movie needed as well. I’d also say that the soundtrack made my anxiety go up and gives it the feel of being in the horror genre.

In conclusion, this was a movie I was debating to see in the theater. I didn’t know if this was going to be horror or not. I’m not fully convinced that it is, but it has elements that would make it adjacent. We aren’t sure what is real in the reality we are in and neither do our characters. They’re being manipulated which is scary. The soundtrack helps that feel as well. I’d say that the acting was good. The cinematography and editing help for this to work. I would also say the soundtrack helps as well. I would have to say this is an above average movie that is coming up just short of being good. Having now given it a revisit, my rating is spot on where I was the first time around. It is worth a watch, but not necessarily as a horror film. This is much more genre for sure.