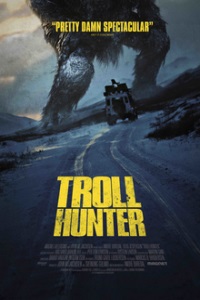 This was a movie that I’ll be honest, I had never heard of until my sister randomly introduced me to it. I feel like I saw the case at Family Video and from the title, I figured that this would be cheesy. I knew that many people are pretty high on this movie when I got into podcasts so I made sure it was one that I added to a list of films to see. My first viewing was I knew it had a snowy element for winter on Journey with a Cinephile: A Horror Movie Podcast. I’m now giving it a second viewing as part of the Summer Challenge Series for the 2010s over on The Podcast Under the Stairs. The synopsis here is a group of students investigate a series of mysterious bear killings, but learns that there are much more dangerous things going on. They start to follow a mysterious hunter, learning what he actually hunts.

We start this movie off with some text that the footage we’re about to see was received as an anonymous package on 10/13/07. They don’t know the validity of what they’re about to show us or who sent it, but it is 280+ minutes of footage on 2 disks full of footage. It has been compiled together chronologically.

It starts off introducing us to some Volda college students who are out to make a documentary. They are following this mysterious hunter named Hans (Otto Jespersen). Bear hunting in Norway is quite regulated so all of the hunters know each other. Hans is believed to be a poacher. The crew is made up of Thomas (Glenn Erland Tosterud) who does the on camera interviewing. Johanna (Johanna Mørck) does the sound while Kalle (Tomas Alf Larsen) is holding the camera. They track down Hans to ask him some questions where he ignores them and asks them to go away.

They continue to follow him and this annoys Hans, who tells them to stop. Things all take a turn when they follow him to a restricted place. There’s a gate that has a sign for a blasting zone. They go in despite what it says and get a glimpse of what Hans is really hunting, trolls. They don’t necessarily believe what they see, but Hans allows them to follow as long as they do everything that he says. He is also adamant that none of them be Christians either.

The deeper they go into this, the more it annoys the government officials who are secretly a part of TSS, the Troll Security Service. They don’t want the knowledge of this filmed. Hans is concerned about why the trolls are leaving their area and this brings them to one of the oldest and biggest of them all.

That’s where I’m going to leave my recap for this movie. To delve a bit more into it, this is a found-footage film that also falls into the mockumentary. I knew that coming in, but the opening text of this movie really reiterates that as well. There are also some texts at the end to reinforce it. With how the subject mattered is handled, I can appreciate this even more after this second viewing. Something else I should bring up here is that we are getting really good writing. There are things that are subtle introduced through conversations or over the radio that factor in later. I’m a sucker for that.

To really get into this though, I love the idea that the director/writer André Øvredal is using here. We all grew up hearing fairy tales talking about trolls. This movie gives us a very serious look at them as a creature. Hans doesn’t have much in the sense of humor department so when Thomas, Johanna or Kalle make a joke, he responds very sternly. The jokes from them really end though when they see the truth. I also love the care that was put into making these trolls as real as possible. Hans relays information about them being like animals. There are aspects taken from stories that are incorporated in as well which worked for me. The bit with the veterinarian to help explain even more of what kills them was also a good touch as well, adding an element of science.

There is also the cover-up aspect to this story. The social commentary there is that the government knows about this, but isn’t sharing it with the general public. We see that the angle with a bear is part of that. I like to see how deep this goes. I’ve talked with friends where we all think, to different extents, that there are probably things that the government knows similar to this that they don’t share with the general public to avoid panic. Do I believe there are mythical creatures running around out there? More than likely than no, there isn’t, but I do believe that if there was, I could see a secret group like this handling it. It just has a sense of realism that cover stories would be made up where logical explanations fall a bit short. It does make me wonder when a ‘tornado’ or ‘natural event’ that is a bit too convenient without real proof could actually be something else. It is also hard to believe this would be real so that adds an element on top of it.

Since I’ve bringing it up a lot, I’ll go do the effects and cinematography. The trolls are CGI. It would be difficult to not have them done that way. For the most part though, I’m on board. Being that this is found-footage, the camera is shaky at times so it makes it harder to pick apart and that is to its advantage. They also do a really good job here of bringing what we would think trolls would like as well. I can be forgiving of them being a bit over the top for that reason. Hans even explains things at times that make sense. As for the cinematography, this really feels like the Norwegian version of Cloverfield, which I also enjoyed. This works better being that we’re following a legit documentary crew so they’re trying to record all of this for a logical reason.

Really the last thing to go into would be the acting. I really like Jespersen and how he plays his role of Hans. He is this no non-sense hunter that doesn’t have much in the way of humor. He is really good at what he does, but he’s getting old. This is wearing on him. I can buy that he’d have a change of heart to allow this crew to film what he’s doing. Tosterud is solid as the mostly on-camera person of their group. I like what happens to him as this goes on since he gets attacked the first night by a troll. Mørck, Larsen and Urmila Berg-Domaas who joins later as Malica are all solid as well. I also really like Hans Morten Hansen as Finn Haugen. He really fits this government role that he plays. The rest of the cast just feel like normal people, which I want for my found footage movie.

So now with that said, I’m glad that I finally saw this movie. It takes a subject matter that if it wasn’t handled with care could become really cheesy. They take such a realistic and scientific approach that it works for me. The acting feels real enough and the effects aren’t great, but I think that they work in what they needed. Being that this is found footage, this really helps as well. I don’t really recall a soundtrack. It is mostly just the ambient noise helps with that realism. The roars of these creatures are great and creepy as well. For my rating here, I would say that this is a good movie and one that I would recommend to found footage fans for sure. There is a bit of shaky camera, so if that’s an issue I would avoid this. The other thing is that it is in Norwegian, so I had to watch with subtitles. If that bothers you, then I would say to skip it as well.