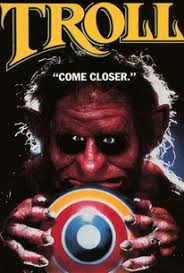 This was a film that I remember my father buying for my sister and I when we were kids. We would watch this all of the time as it was not too scary and just kind of fun. It is interesting seeing now that I’m an adult knowing that this is an Empire pictures film since this would turn into Full Moon, which is a company I would watch a lot of movies from growing up. The synopsis here is a wicked troll king takes over a San Francisco apartment complex to unleash his horde of creatures.

I should state that the synopsis for this film that was listed on the Internet Movie Database was wrong so I kind of altered it a bit. We do have a family that moves into an apartment complex. The father is Harry Potter Sr. (Michael Moriarty). He has a son Harry Jr. (Noah Hathaway), his wife Anne (Shelley Hack) and Wendy Anne (Jenny Beck). Harry Jr. is told to look after his sister while they unpack. She goes into the basement where she is attacked by a troll. His name is Torok (Phil Fondacaro). We see that he disguises himself as Wendy.

From this moment on, Wendy acts differently and the family notices it. She takes the bag of burgers that Harry Sr. brought home and pulls the fire alarm. It is through this that we get to meet the neighbors in this building. There is Peter Dickinson (Sonny Bono) who is a swinger, Jeanette Cooper (Julia Louis-Dreyfus) along with her boyfriend William Daniels (Brad Hall), Barry ‘Duke’ Tabor (Gary Sandy) who is the super and a strange old woman named Eunice St. Clair (June Lockhart).

Harry Jr. knows something is wrong and seeks solace with Eunice who is hiding a secret from him. We see that she could actually be a witch. Torok goes around the other apartments and stabs them with a needle on a ring that he has. This changes them into a kind of pod that opens up to another world. As he takes over each apartment, he seems to get more powerful. Harry Jr. thinks his sister has become a pod person from Mars, but Eunice lets him in on what is really going on here. Can they stop it before it is too late?

I’ll come out and say it, which could actually be more that I just have nostalgia for this one, but it is fun. I really like the idea of this supernatural thing happening in an apartment building. Eunice explains why, which the day the Potters moved in was a kind of witches’ Sabbath and Torok was able to get free. Going even farther though, this is from the 80’s, but I know that I rarely meet my neighbors so something like this could happen. Going even farther, Torok takes the disguise as a little girl which disarms those around him.

I do have to point out that this came out in 1986 and the main character’s name is Harry Potter. He is dealing with magic and creatures that would find in that world. It’s crazy to come out that much before the famous Harry Potter series and makes me wonder if J.K. Rowling might have seen this at one point or not. There is also a painting here of director John Carl Beuchler as well as Anne Lockheart, because I’ve seen it used in other movies actually.

As you can tell though, there’s not really a whole lot to the movie. There is quite a bit of filler in it and it really only runs about 86 minutes. I won’t say that it ever gets boring though. When you have an actor like Moriarty, his dance scene to Summertime Blues is funny, especially when it is preventing Anne from doing the dishes. I do think that it moves along at a good pace where I never got bored. The ending is a bit rushed and I don’t really necessarily like how it plays out. This is really more of a just a fun film actually. It doesn’t necessarily build tension though and the comedy we get here kind of hurts as well. It would have been interesting to see this played more for scares for sure instead of the dark fairy tale.

I’ve started to move into this, but the acting is fine. Moriarty is interesting in his comedic role as the father here. He makes some wisecracks that I love if I’m honest. He had me literally laughing. I like Hack as well. She is quite attractive as the mother and has a great smile. There’s not a lot of depth to either of them aside from some comedy. I will say that does hurt the film a bit. Hathaway I thought was good. It is interesting that he knows something is going on, especially since he’s into monster movies. I don’t necessarily know if I buy in that Eunice would befriend him like she did, but it doesn’t hurt the movie. I do think they should have established more of a normal Beck before she gets taken over, but I think she plays the weird kid well. I do like Lockhart, which is funny that near the end there’s a scene where she becomes younger and played by her daughter Anne, who is quite attractive. Fondacaro gets to play the creature, which he was good, but also Malcolm Mallory, a tenet who is an English professor. There are good cameos by Bono, Louis-Dreyfus, Sandy, Charles Band and Albert Band.

Next I want to shift to the effects of the film, which is interesting that this is directed by Beuchler. He also worked with the effects here, which he is really good at. This movie feels kind of like another Full Moon film, Ghoulies, as some of the creatures look like them. I wouldn’t be surprised if they were re-used. I do like the practical look as I can tell most of them are puppets. That is a non-issue actually. There are some computer effects that are pretty solid as well. Overall I think the effects work for what they needed. The film is shot pretty well also.

The last thing to cover was the soundtrack, which was done by Richard Band. I’m a low key fan of him so I like what he did here. It does kind of sound like other things he’s done in the past, but I don’t mind that. There is a theme that is used throughout, my sister and I loved the part where all of the creatures are ‘singing’ along with it. I thought the music fit for what was needed and help to move things along.

Now with that said, this film isn’t great. I do still have a lot of fun with it and I think part of that could be nostalgia. It does have an interesting story of us not really knowing what is going on with those around us behind closed doors, but I also like the idea of a supernatural thing happening where a troll is trying to take over the world. I do think the pacing is hurt a bit by downplaying it more for kids and the comedy taking the edge off the horror. It still moves along and never gets boring. I’d say the acting is pretty solid with some funny cameos. The effects are really good if I’m honest and I think its shot well. I also think the soundtrack really works for what is needed. I again will re-iterate this isn’t good, but I do find it to be above average. If you didn’t grow up with it, I can you see you not liking it, but I would recommend to horror fans to give it a viewing at least once, especially if you’re a fan of Full Moon.