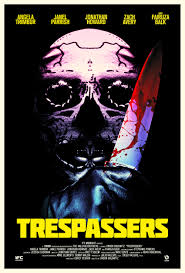 This was a film that I was intrigued by when I saw part of a trailer at my theater and saw this film was going to be playing soon. Seeing that Fairuza Balk was in it was part of it, so I decided to catch it on the last night that it was playing. I debated writing this review, as I wasn’t entirely sure that this was horror. I think that it has enough elements and the ending sequence is a big part of that. The synopsis is two dysfunctional couples rent a modern luxury desert home for the weekend hoping to sort out their messed-up lives. Things take a turn when a visitor shows up.

We start this film a couple that is taken out of a car in the desert. They’re both in their underwear and we see a man in a mask behind them, the mask with a skull on it. He then shoots both of them as it goes black.

There is then a couple that is at the door of a fancy house. They knock and are checking their phone to ensure they’re at the right place and time. The door is unlocked so they go inside. The couple is Sarah (Angela Trimbur) and Joseph (Zach Avery). They’re married, but Sarah had a miscarriage and their relationship hasn’t recovered. The two of them explore the house which brings them to a dark room. Sarah reveals she hasn’t been in one since college and starts to develop the last picture, they don’t see it, but it is of the man in the mask we saw earlier. The picture doesn’t fully develop though.

A knock at the door draws their attention, which is Estelle (Janel Parrish) and her boyfriend Victor (Jonathan Howard). He is kind of a jerk, but Estelle and Sarah are friends from high school. They settle in and party, with Estelle and Victor going much harder. There’s a Polaroid camera there and Sarah takes picture with it. She goes off in the bathroom and attempts to get intimate with Joseph. It doesn’t go so well when she breaks down during it. He leaves and peeps on the other couple. Estelle notices he’s watching and there could be a history with Joseph here.

The weekend is starting off as planned and the problems follow them there. There is then a knock at the door and it is a Visitor (Balk). Joseph noticed a car at the bottom of the hill earlier and it turns out it was this woman’s. She wants to use the phone to call her babysitter as well as call a tow truck.

When Victor cannot kept his temper in check, a series of events start that involve the men we saw earlier as well as the police. There are drugs in the house among trying to hide what they did, can they survive the night?

This film is pretty intriguing in what it’s presenting to us. We have two broken couples, but there is actually history among them as well. An intriguing piece to this though is that it actually made me despise them and we aren’t necessarily supposed. Victor also brings up an interesting real world issue, it is close to the border of Mexico and I’m assuming there are cartel ties here. He makes the comment that criminals probably show up regularly, which almost makes it a propaganda film to building a wall to stop this. We never learn the status of the guys in the beginning, but that’s the sense I got from it.

I do like the emotional connection we do make here. Sarah is dealing with the miscarriage, so we connect with her. We want her to work through this and in the beginning we are pulling for her reconciling with her husband. An issue here though is we learn that Joseph was unfaithful. It does make it easier though when Sarah is breaking up her relationship though in a sense. Estelle is also in an abusive relationship with Victor, but an intriguing move is that he is needed to try to get the Visitor to leave.

Despite the emotional connection with these characters, I found the film to be boring. The idea the film is presenting isn’t really new. I found myself bored after the event that pushes them to make a decision to call the police and try to fix this the lawful way, or to cover it up. The stakes do get raised and there is a bit of a plot going on here, the problem I had though, who is in on this and who’s not. I also really only liked one character, so that doesn’t really help. I did like the strength she has to find though. The ending I thought was fitting and it does build tension at the climax.

I do have to give credit to the acting here though. I thought that Trimbur was good. I felt horrible for her when she reveals her past. I was also pulling for her to figure things out with Joseph. She ends up the only character that I was pulling for survive. She is also quite attractive and I’ve thought that since The Final Girls. I do think that this film does give us a bit of redemption for Howard. He was pretty despicable in decisions he made, but I do like he ends up being punished for it. Parrish I also found attractive and she does get sympathy from me. Victor treats her poorly and I’m not sure when she had her fling with Joseph, but it does kind of make sense. She is shitty for doing it to her friend. Howard is solid in making me hate him. I have to give credit there. It was nice to Balk in this film, even in such a small role. I also thought the thugs and police officers we see definitely rounded out the film for what was needed.

Something that was actually pretty solid was the effects. I do know we had some CGI there, but there was practical as well. It was mostly blood, but it was really there to enhance and I actually did mind it. When things start to get tense we get some effects and I thought it did work there. The film is also shot very well which definitely helps this film.

Now with that said, this film wasn’t great, but it did some good things. I like the concept of the film, but it is one that’s not new. It really doesn’t do anything all that new either, aside from possible using a political issue in our country. I do think that the acting though does help this film, but it was a bit boring for me. It does pick itself up at the climax to build tension to an ending that works. The effects were actually pretty good for a film I wasn’t expecting to rely on them. The soundtrack didn’t really stand out to me, but it did fit for what was needed. I’d actually say this film was above average, it just didn’t do enough to set itself apart for me.