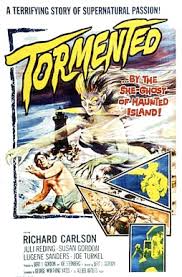 This was another film that I never heard of until I was going through Letterboxd for films that were from the year 1960. The name of the director I did recognize from somewhere, as I should also point out that he helped come up with the story as well, but wasn’t necessarily sure where. After looking through his filmography, it did click that he did a lot of lower budget stuff in the 1950’s and 60’s. This was one that was new to me though. The synopsis is a man lets a former flame fall to her death rather than let her interfere with his new relationship, but her ghost returns to disrupt his impending nuptials.

We start this movie off learning that we’re by the beach. It is actually taking place on an island. There is the most famous jazz pianist of Tom Stewart (Richard Carlson) and he’s to be married to Meg Hubbard (Lugene Sanders). This has upset Vi Mason (Juli Reding). It appears that Tom and her were an item. He broke it off and now she wants him back. Vi thinks she is better for him than the younger and more naïve Meg that Tom is slated to marry. He wants to be with Meg. It is hinted at that Vi will mess things up by blackmailing him. They meet in an old lighthouse. When Vi leans against a railing, it gives out and she is hanging on. Tom has to choose between saving her or just letting her fall. He does nothing and she falls to her death.

He now thinks he’s clear from her. That isn’t the case though. He finds her watch on the beach and throws it out into the water. That’s not the last he will see of it. He is then haunted by her image, smelling her perfume and even thinks that he sees her footprints on the sand following him and Meg. The problem is that aside from smelling the perfume, no one else notices any of these things.

Meg’s younger sister of Sandy (Susan Gordon) is also quite fond of Tom. She is a child, but they spend a lot of time together. Also on the island is a Mrs. Ellis (Lillian Adams). She is a blind woman and knows of the history on here. This includes a boy who went missing and died. There was a haunting or a lingering spirit of him that involved seaweed.

Tom seems to be descending into madness thinking that Vi is haunting him in his dreams and the real world. He also has to worry about Nick (Joe Turkel), the boat captain who brought Vi to the island. He wants the fare that she owed up, but when he learns about Tom and who he is marrying, that raises the stakes a bit more. The pressure and stress Tom is dealing with keeps getting worse and worse until it comes to a head, but is everything he is dealing with real or stress causing him to experience things?

I feel that recap there expands on the synopsis without going too heavy into spoilers. Now I’ve said that I wasn’t really too sure to what I was getting into it, but when I was looking this movie up, I kept seeing it referred to as a ‘schlock classic’. This seems to be mostly more to the type of films that Gordon did, but this was also covered on Mystery Science Theater 3000. I’m assuming part of that is due to this falling into public domain. I could be wrong there as I haven’t confirmed this.

One of the first things that struck me was that it felt quite a bit like Edgar Allan Poe’s ‘The Tell-Tale Heart’. Tom is haunted by Vi, but we don’t know if he really is or not. There are the footprints in the sand. He sees them, but they’re washed away before Meg does. There is a scene where Tom puts the wedding ring on Sandy’s finger and she states he didn’t. Tom sees Vi’s hand, but the younger girl doesn’t. The ring does go missing. I figured this was the stress of what he did getting to him and feeling guilty.

There are things which make me question this stance as well. Mrs. Ellis smells the perfume of Vi in the lighthouse. She can also hear her chuckling. This was a pretty cool scene that I wish they would have taken a bit farther though. This could be that Mrs. Ellis is a bit more in tune with the supernatural having lost her sight. This is something we see played with quite a bit so I can work with it. Something does happen with Meg’s wedding dress and then something at the end that makes me fall into the camp that Vi is driving Tom mad and it is supernatural as well as his conscious/stress playing on him.

This movie though is just lacking depth for me unfortunately. It is better written than many movies that work like this though. There are some interesting aspects introduced, but not really fleshed out. Tom is a musician and Meg’s father of Frank (Harry Fleer) isn’t happy they are to be married. Tom is successful, but Frank doesn’t respect him. Tom is presented as our hero, despite the bad thing that he did. I think it is supposed to make us sympathize with him when Nick is introduced, but to be honest, it doesn’t work for me. I did like that the story just keeps getting more and more complicated though for sure.

To move from this, I would say that the real hero here is Sandy. She sees the good in Tom, but she is witness to a turn of events. Then she is plagued with doing the right thing, because he won’t. Meg is also innocent in this aside from her loving Tom unconditionally. Vi has depth in the bit we get from her to start, but she is willing to blackmail him to get him back so there is a flaw in itself.

Since I’ve covered the characters themselves, I’ll move to the acting. I thought it was pretty solid to be honest. Carlson does really well in playing this character that did something bad and trying to cover it up. As I said, it is interesting that I think the movie is trying to place him as our hero, but he’s not. He takes a dark turn near the end. Gordon is solid as the little girl here. She is a bit annoying, but has a good heart. Sanders plays the naïve bride-to-be well. We don’t get much of Reding before she becomes a specter, but I think she does a great job at haunting Tom. Aside from that, Adams is fine. It is fun to see a young Turkel who I know as the bartender in The Shining. The rest of the cast is fine for what was needed.

The last thing that I would like to go over would be the effects. I think this is where they really get cheesy. Seeing Vi when she is translucent is fine. This is something we’ve seen in decades prior and it still works here. I don’t even mind the time we’re seeing just her hand. I do think that at times seeing her head is something that is a bit cheesy. I get what they’re going for, but I don’t think it is needed. There’s a gag with a picture, it would work just as fine to have her whole body in the frame. Really the only time that it makes sense is a scene where Tom tries to cover her head and takes him to run into Nick. The cinematography and the location are solid though. It does create a bit of isolation with that. Keeping with the theme of the haunting as well, the sound design there works for me.

So now with that said, this movie isn’t as bad as I was expecting. It is a different take on a story like ‘The Tell-Tale Heart’ where it is playing with the idea of is this happening in Tom’s head or not. I like that it pulls you in both directions until the end and I think that the acting of the stars really helps this as well. There are some aspects I do think could have been fleshed out a bit more to really work for me and some of the effects are a bit cheesy. Not as much as I was expecting though. I would rate this as just over average for me. It is in black and white, so keep that in mind, but I rather enjoyed this movie overall.