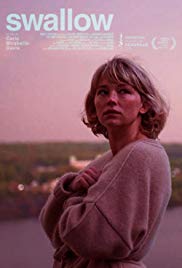 This was a film that kicked off the Nightmares Film Festival that I had the pleasure of attending. I really didn’t know a lot about this one, aside from that it had an interesting title. I did learn that this was the first screening that was outside of New York City, which is cool. The synopsis is Hunter (Haley Bennett), a newly pregnant housewife, finds herself increasingly compelled to consume dangerous objects. As her husband and his family tighten their control over her life, she must confront the dark secret behind her new obsession.

As the synopsis states, we get to meet our main character Hunter through some interesting interactions. Her husband is Richie (Austin Stowell) and he’s the youngest director at the firm that his father is in charge of. His father is Michael (David Rasche) and his mother being Katherine (Elizabeth Marvel). Hunter is not from the same class as them, so she feels out of place. There’s even an interesting interaction at a fancy dinner where she is meekly telling a story where Michael cuts her off. She is trying to impress Richie and his family as she doesn’t fit in.

She then starts to eat things. It starts with a marble and then progresses to things that are much more dangerous like thumbtacks and batteries. When her and husband go to an ultrasound, they notice the foreign items inside. She’s taken to emergency surgery to have them removed. This infuriates Richie, as Hunter doesn’t know why she’s doing this and he’s embarrassed. Hunter is upset with him when he shares what is happening with those he works with. She is then taken to therapy as well as having Luay (Laith Nakli), a nurse, to take care of her.

Through multiple sessions, some interesting information from her past is revealed. They also don’t realize that she is continuing to eat these items. She wants to keep Richie happy, but the more she tries, the more she descends into this madness that has taken her over.

Now I wanted to go a little bit vague on the recap here and just kind of outline the general idea. Part of this is being a festival film and also, I really want you to see this and experience the reveals. Something that I picked up on and I don’t really think it is a spoiler as it gets revealed pretty early on as well as through the interactions Hunter is having. She doesn’t feel that she in control of her life. Since she’s trying so hard to impress everyone, she doesn’t think of what makes her happy and she probably doesn’t even know. On top of that, Richie and his family are rich so they have a high standard there and they’re very judgmental.

I will warn you though, this film really will be decisive. What happens at the end is actually a hot button issue and many people are definitely against this. I actually liked where this went and is definitely empowering her as a woman. There’s also a sad reveal during an interaction with Erwin (Denis O’Hare) that made me tear up. This film does an excellent job at making you feel bad for Hunter, but also feeling hope for the future for her.

That will take me to the pacing of this, which I will admit is a bit slow. A lot of that is the type of film. We don’t really have a lot going on, but we do in the form of learning about this character and her troubles. This is really a character study of Hunter so we get introduced to her and her situation. It doesn’t really waste any time seeing her start eating objects and the effect it has on her. Once her family finds out, it really becomes her becoming a prisoner in her own life. As I said, I really like the character growth there and how this plays out in the end for sure.

This then will move us to the acting, which I would say the best performance by far is our star. Bennett is such a pretty woman and it looks like she has it all. It doesn’t take long to see that she is quite timid and seems like she’s put up with a lot in her life. I like to see her start to take back control to grow into what she becomes in the end. Stowell seems like the perfect husband, but we get glimpses that she’s really a jerk. That grows with the film. I thought Marvel and Rasche do well as the overbearing parents of Richie as well. They really portray that feel of being snobby. I thought we had some really good cameos from O’Hare as well as Luna Lauren Velez. I’m a big fan of O’Hare from his stint on American Horror Story. The rest of the cast is fine and round out the movie for what was needed.

Next would be the effects that are used in the film. To be honest, this isn’t a film like that and it doesn’t have a lot. We actually see Hunter put the items in her mouth, but things are then hidden. I think this is definitely a strategic move that works. We see that she actually collects the items from the toilet as well. I do have to give credit to make up as there’s a scene of her eating and seeing her as she is broken down. Plus the little bit of blood we get looked real as well. The film though is definitely shot very well and I have to say we get some interesting angles and use of color.

Now with that said, I actually really enjoyed this film and kicking off this festival with it really intrigued me for what is to come next. I think this is definitely an interesting character study of this woman that seems like she’s happy, but never dealt with past traumas until now. It is paced in a way where it kept things moving, but not a lot necessarily happens. I like how it ends and I think there’s some really good acting here. There weren’t a lot in the way of effects, but what we get was good. The soundtrack didn’t necessarily stand out. It doesn’t hurt the film though either. I found this to be a good movie for sure. I wouldn’t recommend it to everyone, but I think if you like types of films like this than you can definitely find some interesting things here.