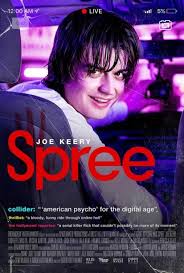 This is another of those films that I heard podcasters talking about on their shows and on social media. The poster that I saw for this intrigued me, so when I saw that it was streaming on Hulu; I figured that I would give it a viewing. The synopsis here is thirsty for a following, Kurt Kunkle (Joe Keery) is a rideshare driver who has a figured out a deadly plan to go viral.

The movie then starts us off to really get to know Kurt. He has his own blog that he is making content for of Kurt's World. He also believes himself to be an influencer, but the problem we learn is that he doesn't even break double digit interactions or viewers. To make matters worse, he is surrounding by the likes of his father is Kris (David Arquette), who is a DJ with some moderate success, and he was the former babysitter to Bobby (Joshua Ovalle) who has made it big in the grand scheme of social media. Kurt does what he can to leech off them in an attempt to build his own following.

That is when he comes up with #TheLesson. Kurt is a driver for a rideshare application named Spree. We watch as he outfits his car with a bunch of cameras that will allow him to film everything. He points out that driving for this is like building a brand. On this day though, he's going to do something a bit special.

Kurt has lost his grip with reality though. This first passenger for this is Frederick Pengler (Linas Phillips) who is a racist. We see that Kurt is 'woke', but I can agree with him here with what he says to Frederick. I can't necessarily agree when he kills him. The water bottles he has in the back have been laced with something and Frederick dies. The next is Andrea Archer (Jessalyn Gilsig) who pretty much ignores Kurt. The problem that he is running into is that his content is boring and it is really only Bobby watching. It doesn’t help he is mocking Kurt the whole way.

Things all take a bit of a turn when while driving Mario Papzian (John DeLuca), Kurt goes to pick up another passenger and it is Jessie Adams (Sasheer Zamata). She is a comedian with a solid following on social media. Mario keeps hitting on her, which she is annoyed by. Her way of getting him to stop is to film and put him on blast. Kurt on the other hand wants her to shout him out on her social media. She actually feels bad for him for how desperate he is. She understands though as that used to be her.

After dropping her off, Bobby breaks the news to Kurt that his content is boring and he doesn't buy what he claims to be doing. This causes Kurt to snap and go more extreme with what he's doing. The more reckless he becomes, the more viewers he gets. This high that he's running on now though is leading to his eventual fall since he can't keep up with what he's doing.

This is another movie, as I feel I've been seeing a few of these lately that doesn't have the deepest story. That is not to say that we don't have some interesting information to dig into with this one. At the core, this is a character study of Kurt. He so badly wants to be famous. What is interesting about him though is that he just doesn't have it. He's a bit awkward and the content he is putting out really isn't that much different. The problem that he has is that he's doing things that others have already done so no one really likes him. He does come up with an idea of going on a killing spree, hence the title. I also really like that the name of the rideshare app is Spree as well. I think that is creative.

The other important aspect to this movie is the idea of being internet famous and an influencer. I'll be honest, I really don't get it. I don't understand how all of these kids and teens out there are following these people religiously. I have a social media presence, but I don't put enough time and effort or do anything that different to get to be like we see with someone like Bobby or Jessie. This is something that is wrong with our world though and I honestly feel like it is detrimental. These people are being worshipped for no reason in my opinion. There is an interesting message from Jessie at a comedy club. We lose sight of what is really important and we don't actually experience the moment.

I don't know if this movie would work if the acting wasn't good. I don't think that anyone is putting in an award winning performance, I should say that. Keery is of course famous from Stranger Things. He does a great job in this movie as our lead. It is interesting how different this role is from the other, because here he is socially awkward and just doesn't get it. He does an excellent job with the role. Zamata is also really good as someone who has found their niche and see beyond it though now that she has gotten where Kurt wants to. Arquette, Mischa Barton and Lala Kent are all solid in their cameo roles. The rest of the cast also rounded this out for what was needed as well.

The next aspect to delve into would be that this is a found-footage movie. Kurt is recording everything with cameras mounted around his vehicle. We also get different things like phones that are recording different things or even body cams. The movie is edited together in such an interesting way in my opinion and the found footage aspect works. It makes sense why things would be recorded as they are with how obsessed Kurt is. The effects are also pretty subdued. They are done practically, which is always good. I think the bit of blood and gore we good works for me.

So now with that said, this is a pretty interesting watch with how society is today with social media. I think that it really brings out the danger and I mean we've seen some things that are fairly similar with those wanting their 30 seconds of fame. The found footage aspect of the movie really helps make this feel real and I think the acting does as well. Keery is really the star here and he plays his character so well. That isn't to say that Zamata and the rest aren't good, because that's not the case. The only thing I haven't brought up was the soundtrack, which fit for what was needed overall. With that out of the way, I'd say that is an above average movie and definitely worth a viewing.