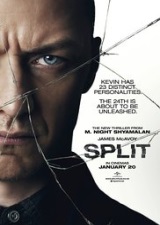 This film begins at a restaurant. We have two young women, played by Haley Lu Richardson and Jessica Sula, are standing with an older man. He is Richardson’s father and played by Neal Huff. They are looking across the room at another young woman. She is waiting on a ride and played by Anya Taylor-Joy. It is at this point that we learn she is a problem student who gets in trouble a lot and is only invited because she would have only been the only girl not invited from Richardson’s art class. She walks over to the three and states that she will just take the bus when Huff instead states he will take her home.

The three young women get into the car while he is packing things into the trunk. It is taking some time for him to get everything into it. Richardson and Sula are in the backseat watching a video while Taylor-Joy keeps looking in the rearview mirror. Finally a man gets into the front seat, but it isn’t Huff. The man is James McAvoy. Richardson in the backseat asks him if he is lost and he puts a mask on. He uses a spray on the two women to knock them out. Taylor-Joy tries the door and when it makes a noise, McAvoy does the same thing to her.

We then shift to the apartment/office of Betty Buckley. She has an e-mail from someone named Barry that they need an urgent meeting with her. This turns out to be McAvoy. He comes by with some sketches of new outfits he thinks he could send to designers to make money. Buckley does agree with him, but wants to know why it was so urgent. He tells her that everything is good though. She keeps asking him what he did and knows there is something up when he won’t tell her.

The women then wake up in a room. Richardson and Sula are sitting on a cot while Taylor-Joy has one to herself. There is a bathroom in the room that they are kept. There is one other door and it opens. McAvoy comes in. He decides that Sula will be the one that he takes and they all go crazy. Taylor-Joy whispers to urinate on herself. She is taken out of the room, but is returned quickly. She did as she was told by Taylor-Joy and she said that he wanted her to dance for him.

At this point, we get a flashback of Taylor-Joy when she was a little girl. The little girl is played by Izzie Coffey. We get throughout the film and it continues to tell her story. It will be pointed out that she has something that happened to her as a child that she has in common with McAvoy. Her father is played by Sebastian Arcelus and her uncle by Brad William Henke. They take her on a hunting trip out into the woods.

The next time we see McAvoy meeting with the women he is dressed in high heels and a skirt. He has multiple personalities. Another one that they have is a 9 year old boy named Hedgewick. The woman one is Patricia and the one that is commanding and in charge, is Dennis. Taylor-Joy tries to convince Hedgewick that Patricia is still mad at him for something he did and that they can help him if he will help them.

The women find that above the beds is an air vent, but there is drywall covering it. Richardson stands on the bed to uncover it and using her shoe while the other two hold the door from letting McAvoy get in. She gets into the vent before he can get in and comes out in another room. She tries to flee, but he is hot on her heels. He finds her in a locker. She is taken from it to a closet to be kept by herself.

Every night it seems that another personality contacts Buckley needing her help, but every time they go, Dennis takes over and will not tell her anything. Dennis poses as Barry, who used to be the one in charge and decided who spoke, but that has changed. There is fear of a 24 personality that is known as the Beast, but Buckley is out to prove that one doesn’t exist.

Can Buckley convince McAvoy that the Beast isn’t real? Or is the Beast really the most dominate and powerful personality? What happened to McAvoy to make him this way? Will the women get free? What happened in Taylor-Joy’s past that has her similar to him? Can she overcome this to survive as well?

I have to admit that I came into this one a little bit leery, because I had been a little bit disappointed in the films that M. Night Shyamalan has been releasing. I really wanted to see this one, because he has done some great ones in the past and also because I was excited to see if McAvoy could pull off this role. I have to say that I’m glad I did. McAvoy was absolutely amazing in his portrayal of someone with multiple personalities. Each different person seemed to have a different style and way of talking so I learned who the different characters were. I liked the story and idea of what is happening. I also enjoyed the back-story of Taylor-Joy and how is draws a parallel to what happened with McAvoy as well. I really liked Taylor-Joy in this film. Buckley did a solid job as his doctor, who knows something is wrong with McAvoy and wants to prove it. She also helps fill in some important details about his condition.

There were some things I questioned or had slight issue with. Last time I had heard anything, people that had multiple personalities either didn’t know they had multiple ones and if they did know, they were not able to speak to each other. This one he is able to. I would also want to know if there is any truth in that people with this disorder could really have one personality which could be diabetic when the others aren’t or if one could have twice the strength manifest in it when the other ones do not as well. Something I just am personally curious to help make the film richer to me.

Now with that said, I would recommend this film. This one has some great acting from McAvoy and the rest of the cast rounds it out as well. Shyamalan did a great job with this one and I’m glad to see him make a film like this to overcome the ones he’s come out with recently that struggled for me. It has an interesting concept and story that keep you hooked through out. His back-story and Taylor-Joy’s have a similar trauma which I liked as well. I would definitely give this one a viewing for the acting alone as I do not think you will be disappointed.