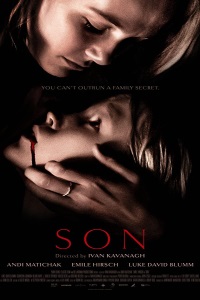 This is a movie that I heard about on a couple of podcasts that I follow. I’m pretty the guys on Exploding Heads Horror Movie Podcast checked it out as did Duncan from The Podcast Under the Stairs. From what information I heard, it ticked boxes for me so I added it to a list of movies to check out, which is why it is a Featured Review for Journey with a Cinephile: A Horror Movie Podcast. The synopsis here is when a young boy contracts a mysterious illness; his mother must decide how far she will go to protect him from terrifying forces in her past.

We start this off looking out of the windshield of a car that is going fast. What I like here is that we are hearing a minister reciting religious lines. It seems like it could be over the radio or the driver is thinking of pass sermons. Either way, this is setting the tone. We can also hear someone breathing that is panicked to add more. It turns out to be Laura (Andi Matichak). She orders a cup of coffee at a diner. Two men come in and sit at the booth behind her. Laura is not wearing shoes and her feet are dirty. This young woman is also pregnant. She flees back into the night, but doesn’t get far before she pulls over due to going into labor. She doesn’t seem to be excited as she has this baby.

The movie then shifts us into the future, but doesn’t necessarily state how far. Laura has established a life for her and her son of David (Luke David Blumm). We see that being a single mother is tough. She is a teacher of what looks to be kindergarten or pre-k. She has to rely on her neighbor of Susan (Erin Bradley Dangar) to watch him after school and while she attends night classes. Despite everything, their lives seem to be pretty good.

That is until that night. Everything seems to be fine until Laura hears noises like someone moving in the house. She thinks it is David, but when he doesn’t answer she goes to his room. She is shocked to find it filled with people. Before she realizes it, the door slams shut and she cannot open it. She goes for help before going back in to save her son.

Two detectives are assigned to the case, Paul (Emile Hirsch) and Steve (Cranston Johnson). The latter doesn’t believe there was anyone there. He thinks she was sleepwalking or imagined it. Paul on the other hand is willing to follow through. The problem here is that there is no evidence there was anyone else here.

Laura has another problem. David mysterious comes down an illness as the synopsis stated, but the doctors can’t figure out what is wrong. It comes with a bad rash, David is vomiting blood and convulsing. The doctors brace his young mother for the worst. That is when the boy gets mysteriously better. Paul is there for Laura and she takes a liking to him. She trusts him enough to reveal that she was a part of a cult growing up and she believes they have found her. Laura is faced with a difficult decision on what to do with her son that gets even darker the more that we learn about his condition as well as her past.

That is where I’m going to leave my recap for the movie as that gets you up to speed. A bit more background that I figure I should include here is that this takes place in the United States south. Laura was in Arkansas when she is fleeing in the beginning and the events with her son are starting in Mississippi. I bring this up because I love the idea of this cult being in the south. I have family from down that way and there is a lot of nothing aside from churches. I could see a cult like this existing.

This idea of the cult is something that really peaks my interest. I like that we are slowly given information to build on. I’m not the biggest fan that a lot of it is done through dreams. I can be forgiving here though. Steve as I stated earlier doesn’t believe Laura from the beginning where Paul is willing to entertain the idea. Laura tells him about the cult. When Paul relays it to Steve, he believes she is telling her version of it to get Paul to side with her. It seems more like pedophile ring. It is interesting that Laura is learning her class about post-traumatic stress disorder, so it is building the idea that she could just be the unreliable narrator and mental illness. I do love them playing with this idea.

Going from there, the movie is really pushing that you either believe Laura and there is a cult after her along something supernatural going on with David. The other is that it is all in her head. Both explanations for me work normally for movies, but I think that whichever you choose, you really need to build the right elements. For the most part, I think that we get that here. This movie doesn’t leave it ambiguous in the end. It does turn a bit clinched though, I do have say that. There is something I started to suspect so when it was confirmed, it didn’t shock me. It is something we have seen as far back as Rosemary’s Baby as well as countless other movies that fall into this sub-genre.

I don’t want you to think that I hated this though, as that is not the case. I was intrigued to see where they were going to go with all of this. There was something that caught my attention was that Laura is told she was a favorite of her father because she could chant the right way and was the only one who could conjure the demon. The person relaying this to her we can’t necessarily believe and there’s a former doctor that is stating that she believed in this cult that didn’t exist. What caught my ear though was Asteroth is one of the demons she is calling to. I’ve heard this demon’s name popping up a lot lately which helps my interest and enjoyment to see that since I’m bringing in prior knowledge.

Moving away from the story, I’ll go next to the acting. For me, Matichak was solid as this mother here. I did grapple a good stretch as her being too young. Looking at her real age, it lines up that she could have a child this age, especially since Laura was a member of a ‘pedophile’ ring. Seeing that cleared it up for me. Her performance worked. Hirsch is solid as this detective that is there for her. I like him doing more horror movies as I haven’t seen a bad performance from him yet. Blumm isn’t great as David, but I don’t have major issues. I would say the rest work in rounding this out for what was needed for me.

Next will be the effects. The biggest thing this movie does is the rashes on David when he gets sick. I’m assuming there are some practical effects there and some CGI. Overall it meshed well and I had no problems. The blood we get looks good. There is quite a bit to be honest. The after effect of some of the attacks didn’t look great. You could tell it was done with dummies. I can appreciate going a practical route here though. Aside from that, I do think the cinematography is well done and I didn’t really have any problems with this part of the movie.

Then finally I want to go briefly talk about the sound design and soundtrack. Now I’ve establish that I love movies with cults in it. This movie does well in that Laura can’t remember a lot of her past and for good reason. She is haunted in her dreams by the chanting the leader did. I like that we get this over top of things we are seeing in the movie. That adds a creepy factor for me. Aside from that, I think the soundtrack works for what was needed without necessarily standing out.

So then in conclusion here, we have an interesting idea of Laura, while pregnant, escaping this cult. She is never fully feels safe, but is giving a normal life for David. This isn’t a new concept though and I don’t necessarily think this movie does enough to really set itself apart. It is entertaining. We get good acting. The effects work as does the cinematography and the soundtrack fits. I will give another shout-out to the sound design here. For me, this is worth a viewing and I would say it is an above average for me.