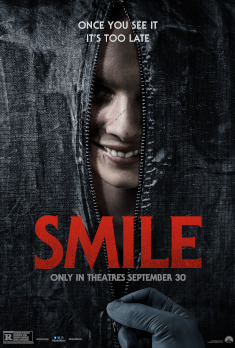 This was a movie that when I saw part of the trailer, I was intrigued. It was one that I missed opening weekend but made sure that I caught it at the Gateway Film Center before it left. I heard mostly positive things so that helped as well.

Synopsis: after seeing a bizarre, traumatic incident involving a patient, Dr. Rose Cotter (Sosie Bacon) starts experiencing frighting occurrences that she can’t explain. Rose must confront her troubling past to survive and escape her horrifying reality.

We start this off seeing a woman in bed. The camera pans to show us pills have fallen on the floor and this is mostly likely a suicide. It then shifts to show us a girl watching on. There’s a scream before we jump to the present. That girl was Rose. She is a doctor in the emergency room of a hospital. We will learn through her boss, Dr. Morgan Desai (Kal Penn), that she’s been working long hours. There is an incident with Carl Renken (Jack Sochet) who must be re-admitted. This isn’t his first time.

Rose is trying to go home when Laura Weaver (Caitlin Stasey) comes in. She saw a professor commit suicide and she’s been struggling since. Rose tries to ask her questions and shockingly, Laura is lucid. She explains that she is a Ph.D. student and that she isn’t crazy. She claims though to see something that looks like people but isn’t. Rose tries to make sense of this when the young woman kills herself.

This is something heavy to take home. She is shaken by it. Rose also thinks she sees something in her house that night. She is spooked when her fiancé comes home and she doesn’t hear him. His name is Trevor (Jessie T. Usher). He tries to help her. He also reminds her that they have dinner with her sister, Holly (Gillian Zinser) and her husband, Greg (Nick Arapoglou).

Things take a dark turn for Rose. She is exhausted from work. She is also carrying baggage from a traumatic event she just experienced and from her past. Weird things are happening to her. She has to figure out if they are really or is it the stress of all this catching up with her. This explores more into her past with her sister as well as a past boyfriend. He is a detective assigned to the suicide, Joel (Kyle Gallner). There seems to be a pattern here with the ‘curse’ that she believes she has inherited. This explores some dark subject matter to get to the bottom of this.

That is where I’ll leave my recap for this movie and introduction of the characters. Where I want to start is that this feels like an American take on the classic J-Horror haunting stories. If you look at this on the base level, this could be like the Ring, The Grudge or Pulse. Rose did something without even realizing it and is cursed. What makes this even more interesting to me though is the back-story that they set up for her where there could also be a logical explanation to everything as well.

With that set up, I want to explore the supernatural angle first. I like the approach the movie takes here. They are using different people who are dependable before descending into madness. What I mean is that we have Rose, who is a doctor. Laura was a Ph.D. student. The person before her was a college professor. These are all people that in normal sense, we would believe when they tell us things. It isn’t your typical schizophrenic patient to start. There is a history of mental illness with Rose though. Despite this, the logic for Rose to think there could be this entity haunting her feel real. I’d say most of the audience would believe as well. It is just the rational explanation for people around her to not.

Now to the other side. You could look at it how Trevor, Holly or even Joel at first. Curses aren’t real. Rose has trauma from her past that is unresolved. She’s been in therapy, but no longer. Seeing someone kill themselves in front of her could trigger her back into that mental state. Long hours at work and not sleeping can also contribute here as well. I don’t believe this is the case, but I love that there is this explanation here. It makes things much more impactful in my opinion.

To stick with this idea, I do have a bit of a negative here. I saw someone knock the film about the message that they’re trying to convey. I do agree with them to an extent. This movie is exploring mental illness. Rose works with patients like this and wants to help. A bit of this is with what happened to her mother. She is trying to compensate. Holly moved on. Rose truly hasn’t. I like how this movie looks at mental illness. It takes it seriously. The only character who isn’t is Rose herself. To explain this just a bit more, she cares about those around her and their mental state. She isn’t taking care of her own. How this movie ends didn’t work for me as well. I believe the entity is real. This ending goes bleak and I don’t know if it works as well as I would have liked. What is interesting is this contradicts what I want in my films and I acknowledge that.

Going along with that, I do feel that the ending they went with potentially sets them up for a sequel. I heard a podcast review on this ahead of me getting my thoughts down. They liked something that I did as well. We don’t know what this creature is. They compared it to It Follows in the sense that the only things they know are the facts of earlier cases. I love the idea that a person must commit suicide in front of someone else to continue it on. That is bleak in general. The only thing I’ll allude to for the ending is what I’ve already said. They could continue this if they want to. They will need to delve a bit more in the entity if they do. Personally, I’m fine if this stays as a one and done. This feels complete.

Where I’ll then go would be the acting. I thought that Bacon was good as our lead. This is pretty much a character study of her. We spend the duration with her and I thought she carried this. We get a bit brief glimpse, but we never see her normal. In the beginning, she is tired. I like that from there we follow as she tries to break this ‘curse’. Gallner is an actor I like and I thought he was solid here as Joel. Usher is an interesting role. He doesn’t seem to be great for Rose so I like where that goes. Robin Weigert is good in her limited role as a psychiatrist for our lead. The rest of the cast are good in pushing her to her she ends up as well. This includes Stasey, Penn, Rob Morgan, Zinser, Judy Reyes, Sochet and Arapoglou.

Where I’ll end this out will be with the filmmaking. What I thought was great was the cinematography. They do great things with setting up shots. This includes depth of focus, the use of shadows and hiding things in it. I was thoroughly impressed there. Going along with that, I’d even say that the effects used are good. There is CGI, but to be honest there were only a couple of times that I don’t think it looked good. If I do have a gripe though, this runs too long. It comes in at almost 2 hours. I think this could be trimmed to an hour and half to run tighter. The only other aspect would be the soundtrack. It is eerie and made me feel uncomfortable. It was used strategic. This used a good number of jump scares as well. I’ll be honest. I’m normally not a fan, but here I thought they were used effectively.

In conclusion, this is a solid movie. I came in not expecting this to be as good as it was since this is a more mainstream, but it has a mean streak to it. There are heavy subject matters explored and I think they do well there. The ending might drop the ball a bit in that respect. I like there being a potential curse or just our character finally hitting her breaking point. Bacon was solid. Everyone else pushes her to where she needs to end up. I thought the filmmaking here was good as well. The cinematography and soundtrack are great. There is a bit heavier with the CGI, but that wasn’t an issue for me. It does run too long though. Not enough to ruin it, but I felt the runtime. I thoroughly enjoyed this one to be honest.