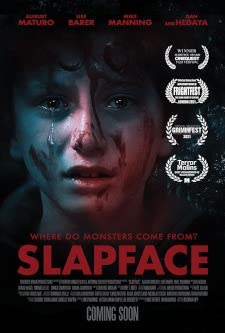 This is movie I knew about as it was the first 2022 horror release to Shudder. It went on a list of movies to check out as January is a tough month. I ended up having some that I rented on VOD or got the chance to see in the theater. What didn’t help was that not a lot of people were high on it. They liked it but didn’t seem to be a lot of love. The week I saw it, there wasn’t a horror movie in theater at that time so I gave it a go. The synopsis is a boy deals with the loss of his mother by creating a dangerous relationship with a monster rumored to live in the woods.

For this movie, we start with cold open. We have Lucas (August Maturo) and his older brother Tom (Mike Manning) playing a game. It is the title of the movie, Slapface. The game is simple. They take turns slapping each other as hard as they can. Later into this, Tom explains when challenged on this that it is something they do, it is special to them. It also helps them to focus on the present through pain. It isn’t healthy regardless.

During the credits there are images from medieval times of demons. What I like here is that some of the drawings focus on children being taken. We also get some newspaper headlines about an evil entity that lives in the woods around this small town. There is also another one telling of Lucas and Tom’s parents dying in a car accident. Their children were the only survivors.

The movie then goes about giving us backstory. Tom stepped up to take care of his brother so he wasn’t taken into the foster system. It is more than he can handle though and Lucas just roams around all day. Tom goes to work and then to the bar. We see he has a bit of a drinking problem. This most recent visit introduces him to Anna (Libe Barer) who comes home with him. It is also here that Tom speaks with Sheriff John Thurston (Dan Hedaya). It feels like he worries about them, but he’s given them too many chances.

Lucas on the other side of this goes to the library. He reads up on an entity that is supposed to live in the woods and be associated with an old, abandoned building. He is drawn to this building. It is here that he puts a picture of his mother, cuts his hand and asks for her back. Lucas also must deal with bullying from a set of twins, Donna (Bianca D’Ambrosio) and Rose (Chiara D’Ambrosio), and their friend Moriah (Mirabelle Lee). It turns out the latter has a crush on Lucas, but knows if she goes against the twins, they’ll bully her too.

Tom and Anna are ‘in love’ which annoys Lucas, thinking he’s losing his brother. Things are made worse when this entity from the woods might have latched on to Lucas. It doesn’t seem to want to hurt him but hurt those around that hurt him.

That is where I’m going to leave my recap as that fleshes out a bit more of what we are getting here without going into spoilers. Where I want to start with my breakdown would be with Lucas. He has a rough go of it. He lost his parents when he was young and now it is just him and his brother. He does have it better than some since his brother is old enough to be his guardian. The problem here is that Tom isn’t emotionally mature to take on this role. We can see it wearing on him and I think therefore Tom is an alcoholic. He is forced to give up his life to look after Lucas and he isn’t ready. This is an interesting look at young parenthood. Lucas is a good kid, but he doesn’t have the support that he needs. That is why this entity latches on to him, he accepts it to an extent.

Now I know that I said I was going to cover Lucas and described more of his brother there. I think that needs to be established. This movie is looking at abuse. Tom is part of that. This game they play of Slapface isn’t healthy. Tom is his brother, but he is also the guardian so we are getting a commentary here on child abuse. Tom as I said turns to alcohol to cope with his issues, so we are seeing a broken home. They are also orphans. Going along with this, Lucas is bullied by Donna and Rose. Moriah also joins in a bit, but she does care about Lucas. It also doesn’t help that the area they live looks to be middle to lower class. Where the brothers live is more in the country, so there is less opportunities to help. I’m not shocked that Lucas would allow this entity into his life as it is the only thing that is truly there for him in his eyes.

Where I’ll shift over to is this entity. I like the idea of what we are getting here. It seems to be a witch or a hag of sorts. It is played by Lukas Hassel, but strategically we don’t get a good look at it. We will only see part of it and I think the cinematography is good there to shoot it from a low angle like we are seeing it as Lucas would. This entity is quite tall as well. There might not actually be a creature though. There is a way to read this that this is all in the head of Lucas and he is manifesting what we are seeing. There are hints from Sheriff Thurston that Lucas might be troubled. I like to think there is, but I can see what they’re getting at. This creature is the manifestation of the bad things within Lucas and what we are seeing as he gets his revenge on those that hurt him.

As good as I’m making this sound, I did find this to be boring unfortunately. Part of that could be when I was watching it, but it struggled to keep my attention. I think things got to be a bit too repetitive with what we’re seeing. I wanted more of the creature and learning a bit more about its backstory would have helped as well. With this running less than 90 minutes, it is a shame to be honest. Having learned this was originally a short, I’m assuming that is why it feels like it is more padded. I am curious to seek that out now to see it is runs tighter.

With that taken care of, I’ll go over to the acting. I thought that Maturo does well as this boy who is struggling. With all the factors given, I can see the logical explanation to everything we’re seeing. I could also see why an entity like this would latch on to him as well. It is sad to see everything that he goes through. I thought Manning was solid as well as his older brother. He is dealing with things of his own and the two of them do not have healthy ways of coping. They play well off each other. I like Barer as Tom’s love interest even though I think we are missing parts there. It feels forced and too fast. Lee is solid as Lucas’ friend, but she isn’t very good. They are kids and lacking that emotional maturity, so there is that. The D’Ambrosio twins are good as the bullies. I also like Hassel and Hedaya in their roles as well. The acting is solid across the board.

The last things would be the effects and soundtrack. What we get with them are fine. They have a bit of CGI, but it worked. Most of what we are getting is hidden, which again I’ll credit the cinematography there. The look of the monster was good as well. I thought that the soundtrack fit for what was needed without necessarily standing out.

In conclusion here, this movie had some promise. I like the social commentary that we are exploring here, but I think that the movie loses its way. We linger on things a bit too long instead of fleshing some of the more interesting things out. There is some time to play with, so I think by doing that, it makes the rest of the movie a bit more interesting and work more. With what we have, the acting was solid across the board. I had no issues with the effects and the cinematography helps there. Other than that, the soundtrack worked for what was needed. This movie is over average. It is falling short with my issues to go higher.