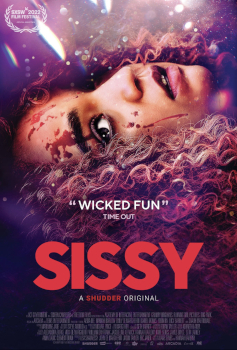 This is a movie that I noticed was on Shudder. I’ll be honest, I thought that it was another one that was on my list so I decided to check it out one night. It wasn’t until referencing back that I realized this was the wrong movie. Regardless, this is a 2022 horror watch so it worked out.

Synopsis: teen best friends Cecilia (Aisha Dee) and Emma (Hannah Barlow), after a decade run into each other. Cecilia is invited on Emma’s bachelorette weekend where she gets stuck in a remote cabin with her high school bully with a taste for revenge.

We start this off seeing the two characters from the synopsis as children. Emma (Camille Cumpston) and Cecilia (Amelia Lule) were inseparable from what we can see. We then jump to the present where Cecilia is Dee and does self-help videos. She isn’t licensed, but she shares different things that she does to help herself. She is up to 200K followers.

She then must run to the local pharmacy. It is there that she bumps into Emma. They haven’t seen each other as the synopsis said for a decade. Emma invites her old friend to her bachelorette party where they’re singing karaoke.

Emma didn’t fully believe that she would show. She’s drinking and having a good time which makes her fiancée Fran (Luc Barrett) question things, as do their friends of Jamie (Daniel Monks) and Tracey (Yerin Ha). The night goes well though. Emma pukes on Cecilia and they end up in the bathroom. It is there she invites Cecilia to come on her ‘hen’s weekend’.

They hit the road and it is during the drive that Cecilia learns that they’re going to Alex’s (Emily De Margheriti) house. She is the bully that was alluded to earlier. It should also be pointed out that Cecilia gets lost in her thoughts and hits a kangaroo that must be put out of its misery.

Before ending my recap, I should point out that the title of the movie is a reference to Cecilia’s nickname from when she was a child. Emma called her Sissy. Alex did as well, but she used to bully Cecilia. When they arrive at the house, Alex is irate. She has a scar on her face and it was caused by Cecilia. Alex also believes that Sissy is a psychopath. We do start to see that there are cracks there and the stress of this weekend might exacerbate it as well.

Now that is where I’m going to leave my recap for this movie. That should be enough fleshing out of the synopsis as well as introducing the characters. Where I want to start though is with our lead. This does well in presenting Cecilia as the victim from the start. We see from her point of view and seems like Emma was her best friend. That might not actually be the case though. They were friends, but it seems more like Emma felt sorry for her. She is a people pleaser. Cecilia thought they were closer than what they were. This is a tough pill to shallow. There is an unresolved issue here that she must come to terms with it during this weekend.

To delve a bit more into the psyche of Cecilia, she is on shaky ground. She exudes confidence without having it. She needs social media to reinforce it and make her feel better. When she feels down, that is where she escapes to. There is an uncomfortable scene where she is called out by Alex, Jamie and Tracey. They point out what she is doing is fraud. Cecilia comes back that she has a disclaimer. This group seems like social justice warriors to the extreme. I’m all for doing the right thing and holding people accountable, but there are bigger things to be concerned with than what we get here. It is interesting that Fran is going for her doctorate to be a psychologist so that makes it awkward with Cecilia who has no formal training. The latter has more of a footprint to the outside world.

Before I fully get away from this character, I want to talk about Dee’s performance. She does so well at faking that she is confident. It is also great to see the other side when she is faltering. I thought it was one of the better performances of the year. Going along with this as well, I like how this introduces her side of the story. The more characters we meet, the more of the other side we get. Alex calls her a psycho for attacking her as a child. Seeing what Cecilia put up with, I don’t blame her. Now as an adult, the effects of this are coming out worse. There is years of pent up hurt and rage bubbling up to the surface. This hooked my interest to see where it would go. It is quite dark with its implications which I appreciate.

Since I’ve already moved over into the acting, let me talk about the rest of the cast. Barlow is interesting as well. She seems nice. She wants to include Cecilia in what their doing. Emma does this out of pity from what I’m gathering. It also feels a bit like she led Cecilia to believe they were better friends with just how Emma is. It is a bit fake which feels real. De Margheriti is good as the bully. She has the right to be angry, but it is also her fault. Her along with Monks and Ha are just horrible people. They annoyed me, but I appreciate it as that felt real. Other than that, I thought Barrett and the rest of the cast rounded this out for what was needed.

The last things then to go into would be with the filmmaking. I thought that we got good cinematography. Along with that would be the editing. They do interesting things to cut over to Cecilia making videos or watching old ones. I thought this was interesting that when she gets down or hurt, that is where she runs. She needs that reassuring. There are also great shots that are used throughout and the use of focus. This changes at different times which adds something. Other than that, the effects are good. We get brutal ones at the end that caught me off guard. They looked to be practical which is always good. I’d also say that the soundtrack fit for what was needed without necessarily standing out.

In conclusion, this movie is doing interesting things. It is one that is of the time with influencers. Cecilia is unstable, but I like how she is established. She wants to help people. She also wants to be friends with Emma and this leads to disastrous results with that friend group. The performance from Dee is good. The rest of the cast around her push her to where she ends up. We get good cinematography as well as effects. I think that this has something interesting to say but falls a bit short of fully keeping my attention. It is worth a view though. I’d even recommend this to non-horror and horror fans alike.