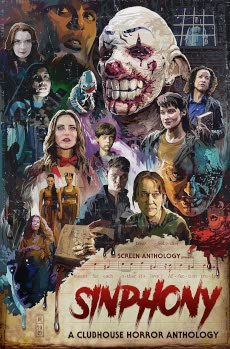 This is an anthology film that I got see at the Nightmares Film Festival. It kicked it off and was the first thing that I saw there. What was interesting is that I used to write for a site/listen to podcast of one of the filmmakers. I didn’t know which one she did so that made it interesting to figure it out. This was the Midwest premiere for the movie as well.

Synopsis: a horror Anthony that explore various aspects of the human condition as each character traverses through tragedies caused by a supernatural entity.

Now I’ll be honest, I’m not sure of the orders of these so I’m going to just rundown them. The first one I’ll go over is ‘The Keeper’. This story tells of an innkeeper who welcomes in a family. There is something off about them though. The son looks sick. The father seems to be aggressive toward his wife. She looks tired and the guy running this place sees it. He wants to help. Things aren’t as they seem though.

Then there is ‘Ear Worm’. This is about a father and son business that takes on a job cleaning up mold and fungus. There was something that happened here with the earlier owners. The son finds a fungus that might be more deadly than they realize which leads to terrifying conclusions.

Another of the stories is ‘Tabitha’. The title character is played by Alysse Fozmark. She committed a robbery but was shot in the process. She tries to get help. Her time is limited though and she sees a specter that reminds her of what she did.

The next story would be ‘Do Us Part. This tells of a story where Danny (Michael Pearson) is going through with his life. Clara (Amelia Macisaac) tries to get his attention, but she might have passed away and can’t seem to do so. That doesn’t stop her from trying.

I do know that the first story as I’m going through them is ‘Mother Love’. This has a mother talking with her friends about a serial killer who is targeting mothers over the phone. She could be the next target. She also will do whatever it takes to protect her child.

There is ‘Limited Edition’. This story has a woman driving an electric car. She tries to savor this time as she gives a ride to another woman. This other has a strange book that might bridge the gap between dimensions.

Another is ‘Forever Young’. For this, we have a woman at her 30th birthday party as she struggles with staying young. She tries to do a popular dance on an app and it causes her to get trapped in a terrifying state.

We also have ‘Maternally Damned’. There is a woman who didn’t want children, gets pregnant and even though her symptoms seem normal, there could be a monster growing inside of her.

The last story aside from the wraparound is ‘Symphony of Horror’. This one has a parasitic brain infection caused by a cursed song that when it is heard, it sends people into a killing frenzy. Even people who aren’t normally violent.

The wraparound is quite interesting. It starts with a woman in labor, having a baby that might have something supernatural wrong with it. We also see drawings being hung up and elements of these stories incorporated, showing that they take place in the same universe.

Now with those recaps out of the way, where I want to start is that it makes sense to me with the synopsis. This does explain things as I look back on them. The most common theme seems to be family, loved ones or things to this effect. I won’t go through each one to explain that. What I will say though is that we are seeing relationships between parent with their children, significant others or in the case of ‘Maternally Damned’, someone becoming a mother while getting aid from their family. There is always a horrific take that can blend comedy or go dark. Regardless, I think that there is more under the surface, which I can appreciate.

Before moving away from the stories, what I will say is that we get a high number of shorts. It almost is too much since this has a runtime just shy of an hour and half. I’m not sure if all get as fleshed as they needed to be. I just found my interest waning a bit despite the runtime. There is like ‘Mother Love’ that pulled my interest. I enjoyed the comedic beats of ‘Do Us Part’ and the implications at the end. These shorts do well in getting their punch out there. I just think some need a bit more time than they’re allotted.

Where I want to go next would be the acting. Since there is such a big cast, I’m not going to go through individuals. What I will say is that despite the budget these are working with it, I’d say the performances are fine. No one stands out in that they would win awards. I’m not looking for that though. What we get works in the confines of the stories. I feel like these are the characters they are portraying.

The last things to go into would deal with the filmmaking. I thought that the cinematography across the board was good. These are shot well which is refreshing with the budgets that they are working with. What also is interesting is that we have different filmmakers working on their specific project, but it does come together. That’s not to say that the tone of isn’t different in the shorts themselves. None feel out of place though. Other than that, we get practical effects which is good. There is also some CGI that wasn’t great, but not enough to ruin things. I come to expect that since it is easier and cheaper. The soundtrack was also fine without necessarily standing out.

In conclusion, this is a decent, lower budget anthology film. I do like looking back and seeing that the common thread through the different stories dealing with family or friends that tell their own distinct tales. I’d say that the acting is fine. They do well in feeling like the characters they are portraying. These are also well made. I’d like to see more practical effects but also cannot on harp that aspect to be honest. This is worth a viewing in my opinion.